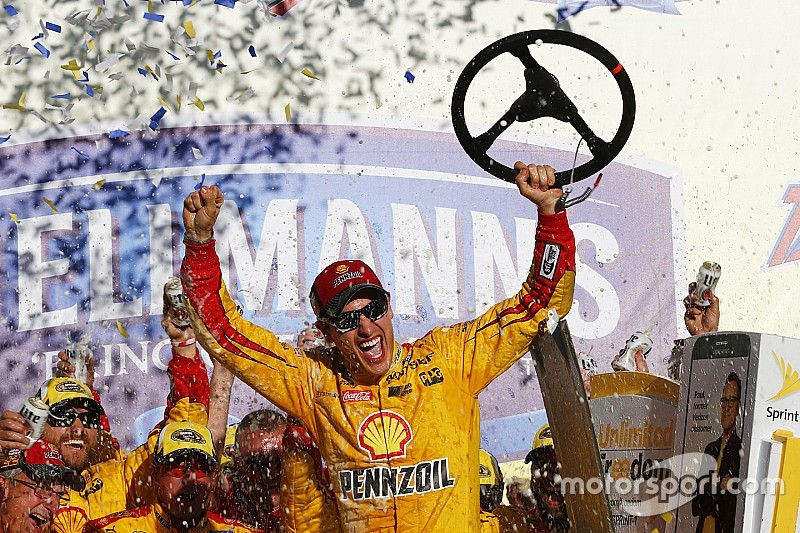 Joey Logano punched his ticket to the Round of 8 with his second career Cup win at Talladega Superspeedway.

But his 16th career victory was far from a breeze.

Logano started 16th and but advanced to the top five by Lap 25. Twelve laps later, Logano exited the pits and took the jack stand with him. NASCAR penalized the No. 22 Shell/Pennzoil Ford with a stop-and-go on pit road and Logano was forced to fight his way back to the front.

Brad Keselowski’s misfortune played in Logano’s favor. He inherited the lead from his Penske teammate Brad Keselowski after the No. 2 engine expired after 144 laps.

“That’s the way to finish,” crew chief Todd Gordon told the No. 22 Team Penske squad. “On to the next round. Way to perform pit crew.”

“I love winning here,” Logano said. He then proceeded to execute multiple burnouts on the front stretch.

“It’s never a layup here at Talladega,” Logano said. “It’s always close. You never get a big lead. Todd made some good adjustments during the race and found some speed in the car, so that was pretty neat to see some of that. We got that track position and just hung onto it.”

The race was slowed by six cautions for 25 laps. Oil from Martin Truex Jr.’s car triggered the first yellow after his engine expired on Lap 42. The polesitter was the first Chase casualty of the day. Truex was scored 40th.

A three-car wreck occurred coming off of Turn 4 on Lap 114 when Jeffrey Earnhardt bounced off of Greg Biffle. The cars spun and collected Casey Mears in the process. Biffle had led 13 laps prior to the accident. Mears’ day was over. He finished 39th.

Brad Keselowski ignited the third caution on Lap 145 after the No. 2 Ford’s engine blew up after leading 90 laps. Keselowski, who won his fourth race at Talladega in the spring, finished 38th. Ryan Blaney retook the lead after Keselowski dropped out but was shuffled back and finished 11th.

Logano took the lead on Lap 147 with Harvick in tow. NASCAR called a caution for debris three laps later. The race evolved between one-single line formation to pack-racing in the closing stages but Logano’s position at the point was never challenged — even on the final two restarts.

Entering Turn 3 on Lap 182, Kasey Kahne spun to the right —just in front of Jamie McMurray. Trevor Bayne, who was riding behind the No. 1 Chevy, plowed into the back of McMurray but recovered to finish 17th.

The race restarted on Lap 185 with Logano in the lead followed by Harvick, Alex Bowman, Scott and Kurt Busch. When the pack took off into Turn 1, Bowman came down on the apron and lost control of the No. 88 Chevy in the grass.

The race went into overtime on Lap 190. Logano moved out and with a push from Scott, sailed on to the win.

“I was able to stay on the bottom and try to run the bottom and keep everyone in line, and that worked out really well,” Logano added. “Kevin did a good job with that, which ultimately got us all a great finish. It was fun racing there at the end.

“I was really confused. I didn’t know what lane to pick coming to the last restart, but I knew Kevin had a lot of experience in these situations and is great at speedway racing, so he did a good job of pushing me out and then had to defend the top lane with Brian Scott, so a couple of Fords out front here at Talladega is pretty cool.”

Logano leads the eight seeds entering the Round of 8 at Martinsville Speedway followed by Jimmie Johnson (23rd), Harvick, Matt Kenseth (28th), Carl Edwards (29th), Hamlin, Kurt Busch and Kyle Busch (30th). Although the Team Penske cars remained at the front throughout the race, while the Joe Gibbs Racing trio rode around safely in the rear of the field.

"I think it was really Ford won today," said team owner Roger Penske. "The way the cars ran there was no question that Roush Yates gave us some strong motors. I think we had great cars.  We’ve had them here the last few races, but the way the guys worked together.  You saw many laps they ran one, two, three, just grinding down laps was kind of our plan.

Along with Truex and Keselowski, Austin Dillon (ninth) and Chase Elliott (12th) failed to transfer to the next round.

Keselowski's Chase chances go up in smoke at Talladega: "We kept finding debris"