Logano wins at Richmond in Penske 1-2 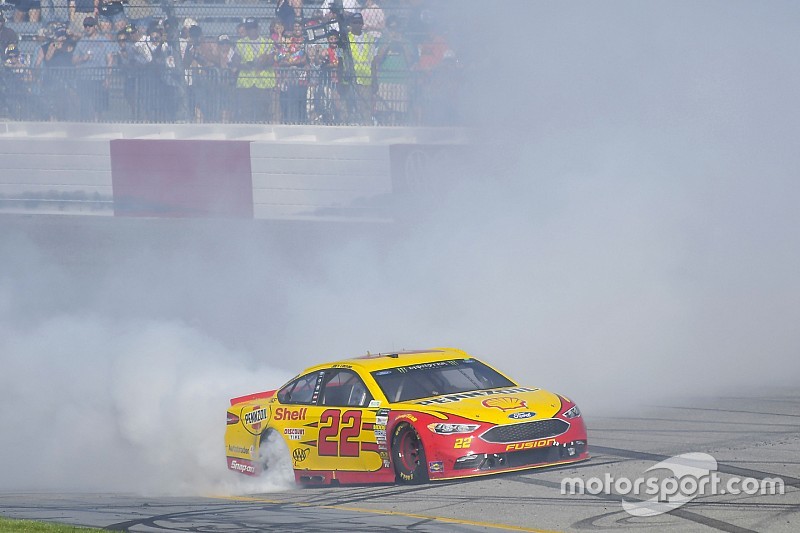 Kyle Larson, who finished 14th, expanded his point lead to 40 points over Truex.

Penalties proved costly for Hendrick Motorsports on Sunday. Dale Earnhardt Jr., was busted for speeding in the first stage. Between the Stage 2 and 3 pit stops, Jimmie Johnson’s team had an uncontrolled tire. Although he was 12th after the second segment, the No. 48 restarted 24th.   On Lap 252, Kasey Kahne received a speeding penalty. When the leaders pit on Lap 379, the No. 24 team also had an uncontrolled tire. With 19 laps remaining, Chase Elliott restarted 27th.

Although the leaders began pitting with on Lap 315, Ryan Newman, Johnson and Earnhardt remained on the track. Keselowski passed Earnhardt and was coming for Johnson when he pit from second on Lap 335. Seven laps later, as Johnson was barreling down the backstretch, he slid up into Earnhardt to trigger Caution 6.

“He just plowed into us,” Earnhardt said.

The leaders pitted with Keselowski exiting first followed by Newman, Hamlin, Harvick, Matt Kenseth, Kyle Busch, Logano, Chase Elliott and McMurray. The race was slowed for a seventh time on Lap 356 when  Earnhardt spun in Turn 3. The No. 88 would finish 30th, two laps down.

Keselowski restarted at the point followed Newman, Kyle Busch and Logano. Matt Kenseth, who led the most laps — 164 — caused the eight caution on Lap 365, after losing a right rear tire following contact with Elliott. He finished 23rd.

Race leader Keselowski — and Logano who was fourth at the time — remained on the track while the other drivers on the lead lap pitted. Kyle Busch was first out of the pits followed by Larson, Harvick and Truex. However, Truex had a commitment line violation and had to start at the rear of the field.

Although Keselowski struggled on old tires and ended up battling with Busch, Logano, who started from rear of the field at the start of the race after the team changed the transmission on the No. 22 Ford, took the lead on Lap 371 for the first time in the race.

On Lap 377, Ryan Blaney wrecked after contact with Kurt Busch to ignite the ninth and final caution. Larson stayed out with Stenhouse, Chris Buescher, Truex and David Ragan, while the team Penske Fords and Busch pitted. Busch received a commitment line violation and dropped to the rear of the field. Larson led the field to green for the final restart on Lap 381, however Logano caught him two laps later and led the final  17 circuits to the win in his 300th career start.

“My thought process was, ‘Oh no!’ right after we stayed out,” Logano said of the stops on the eighth caution. “But we were able to maintain the lead. I don’t think we would have been able to win the race and hold off Kyle (Busch) if it had stayed green. The caution came out. The boys had a great stop which gave us good track position to pass the cars that stayed out. We were able to have a good start, work our way past those cars and tried to take off the best I could.

“I knew the 2 (Keselowski) was so much faster than everybody and I had to get out there as quick and as far as I could. He was on his way to catch me. I think he was catching me a couple tenths a lap. That was all I had inside the car and I burned them up early trying to go. I am proud of the effort of the team. We executed under pressure today and brought a car home that was a 5th-10th place car home to victory lane.”

There were 18 lead changes among eight drivers. The race was slowed by nine cautions for 53 laps.

Hamlin earns first top-five finish of the season at Richmond