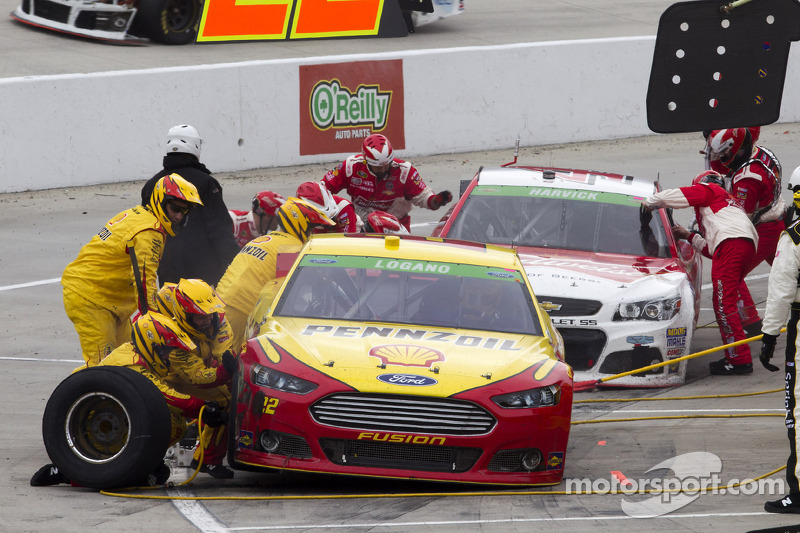 "As drivers, we want more grip, we want a softer tire, we want a tire that wears out, and then we’re putting so much load on them with these heavy cars it’s almost impossible to do both, so it’s very, very difficult to make that happen." Logano

FORT WORTH, TEX. – Joey Logano is “concerned” when it comes to the current tire package at Texas Motor Speedway.

After blowing a tire during practice at Auto Club Speedway two weeks ago and being forced to bring out a backup car for the race, the 23-year-old Penske Racing driver is well aware of the consequences. 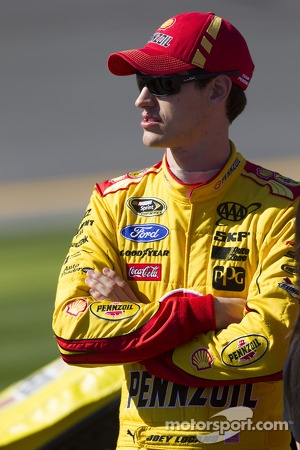 “This new package, with the added downforce and added load on these cars – we’re going faster – it puts a little more strain on these tires and this is one of those race tracks that if you run on that white line you’re catching some of that apron and we really think that’s what was blowing the tires out,” Logano said.

“You have a lot of camber and then when you put it down on the apron it’s basically like adding more and it blows out the shoulder of the tire there. With that the added left-rear camber also, they start doing that on low air-pressures for a while it starts to break away the tread from the sidewall there.

“I’m sure Goodyear goes back and looks back at it and figures out what the answer is to make sure we don’t have that again, but obviously this is the first faster race track we’ve gone to since then and you’re gonna have a concern. It would be kind of dumb if you didn’t have a concern coming into this.”

It would be kind of dumb if you didn’t have a concern coming into this.

Logano acknowledged that his team was aggressive when it came to setting up the No. 22 Shell Ford in California. Still, Logano and his Penske teammate Brad Keselowski were part of a dozen cars that suffered tire woes, despite Goodyear preaching tire management. Many teams opted to go lower than the tire manufacturer’s recommended air pressures or incorporated too much camber into their setups. With the increased downforce and higher speeds produced by the Generation 6 car, Goodyear planned accordingly for Texas based on lab testing which is devised to replicate actual race conditions.

“We conducted lab durability testing with this package to verify the performance of this tire set-up, including the validation of our air pressure recommendations,” said Greg Stucker, Goodyear’s director of race tire sales. “Our test process enables us to utilize track and car data to simulate actual race conditions. When time does not allow for a track test, this modeling, in essence, allows us to do the same thing.

“Once we generate this data, confirming our recommendation and at which air pressures the tires need to be run, we share that information with the teams. The teams have the ability to use this inflation data, along with the tire characterization data we supply each week, to make choices to optimize endurance and performance. Teams have asked for some flexibility with how they set up their cars. This information is just another tool in their toolbox.” 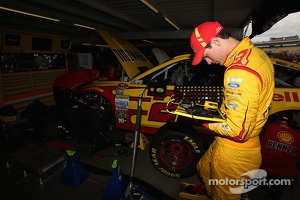 This weekend, Goodyear is bringing a new right side tire (D-4618) with its multi-zone tread technology. The combination features two distinct compounds -- 10 inches on the outside designed to offer more grip along with two inches of a more durable material on the inside created to absorb heat and wear. The left side tires (D-4392) debuted at Texas in 2011 and was used at Chicagoland, Darlington and Homestead last year.

NASCAR vice president of competition Robin Pemberton commended Goodyear on their commitment to bringing a competitive tire to the racetrack despite the numerous modifications directed by the sanctioning body.

“With all the changes we've brought forward in the last number of years with cars and suspension changes and aero changes, things like that, we've been in step with each other, in tune,” Pemberton said.

“Goodyear has done a great job developing new tires and bringing their new technology in to bring the best racing in the world to all of our fans. It's been really good. It's been elevated. It's been a really good working relationship.”

Logano is well aware of the challenges Goodyear faces as well particularly with a track as rough as Texas and where speeds top 200 miles per hour into the corners. Still, as a competitor he acknowledges that teams will continue to push their cars to the limit.

“I don’t really want to blow out tires because it hurts, so I’d rather have something that’s a little tougher tire that can handle that stuff, but it’s such a hard thing,” Logano said. “As drivers, we want more grip, we want a softer tire, we want a tire that wears out, and then we’re putting so much load on them with these heavy cars it’s almost impossible to do both, so it’s very, very difficult to make that happen.

“They’re always constantly adjusting on their blends and constructions and what they’re doing with their tires, so it’s not from a lack of effort on their part. They’re trying really hard. They’ve got a lot of really smart people over there, but our cars ask a lot out of a tire.”

Bayne has a new hot rod For Texas