The result at Richmond International Raceway helped Logano secure a top ten finish in the point standings after the first 26 races of the NSCS season.

HOUSTON, TX – Joey Logano, driver of the No. 22 Shell-Pennzoil Ford Fusion in the NASCAR Sprint Cup Series (NSCS), finished 22nd in the Federated Auto Parts 400 on Saturday night. The result at Richmond International Raceway helped Logano secure a top ten finish in the point standings after the first 26 races of the NSCS season and a coveted position in the 2013 Chase for the Championship. 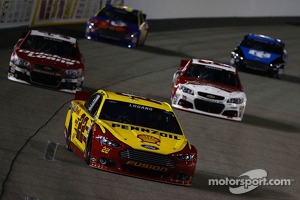 “Securing a spot in the Chase for the Championship is a huge accomplishment and a significant milestone in Joey’s NASCAR career,” said Tim Cindric, president of Penske Racing. “With Joey in the driver’s seat and Pennzoil technology in the engine, we are excited about the opportunity to bring home another championship and add to the history of success at Penske Racing.”

After beginning the season in February at the prestigious Daytona 500, Logano has established himself as one of the top drivers in NASCAR, producing a total of eight top five finishes this season. Logano earned his first Cup Series win for Penske Racing last month at Michigan International Speedway when he captured the checkered flag at the Pure Michigan 400.

With his win at Michigan and by finishing in the top ten in the point standings, Logano will be reseeded in the sixth position when the “playoffs,” featuring a total of 12 drivers, begins next weekend at Chicagoland Speedway.

Since joining the Shell-Pennzoil and Penske Racing team in 2013, Logano has emerged as a leading contender to take home the team’s second NSCS Championship. Throughout the season, Pennzoil engineers have worked closely with Penske Racing to develop motor oil formulations to help maximize performance and engine reliability for the team, with those developments contributing to the advancement of the brand’s technology.

“At Pennzoil, we strive to help the motorsports teams that we sponsor gain a technological advantage over the competition by continuously testing new engine formulations that help keep their engines running clean and smooth,” said Bree Sandlin, global brand manager, Pennzoil. “We are thrilled to have been a part of this major accomplishment in Joey Logano’s career and have great confidence in him leading the Shell-Pennzoil team in the 2013 Chase for the Championship.”

Ryan Newman to drive for Richard Childress Racing in 2014