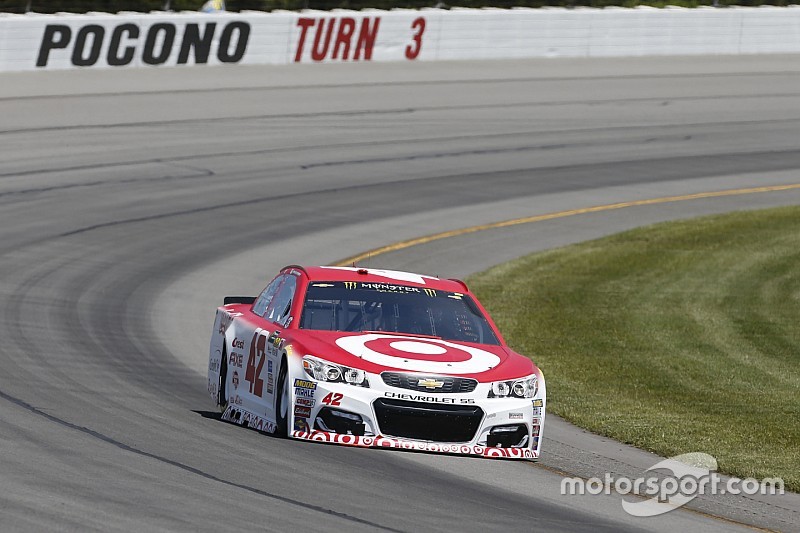 Kyle Larson won his third stage of the season in Stage 2 of Pocono 400.

Jones quickly passed Stenhouse for the lead. Two laps into the segment, Clint Bowyer hit the wall in the Tunnel Turn. He sustained right-side damage and was forced to pit. Bowyer dropped to 28th.

Earnhardt was the next casualty after his transmission failed on Lap 59. He completed 58 laps before limping to the garage on Lap 60.

Busch had an 11.3 second lead on Lap 85. Jones pit from second on Lap 88. Busch led 68 of the first 100 laps before pitting on Lap 89, handing over the lead to Denny Hamlin. Hamlin led Lap 90 then handed over the point to Daniel Suarez. When the No. 19 pit one lap later, Larson cycled into the lead.

Johnson ignited the caution on Lap 96 when he lost control of his brakes and slid sideways into Turn 1.

“I can only speculate that I got the brakes too hot and when I went to the brakes they just traveled straight to the floor,” Johnson said. “I didn’t even have a pedal to push on. At that point, I threw it in third gear and I was just trying to slow it down. I was heading to the grass and I was wondering why I didn’t turn right and get to the wall sooner, but I’m fine. Certainly, a big scare. I haven’t had a scare like that since 2000 at Watkins Glen.

“So, just want to let my wife and kids and my mom know that I’m okay and I will go change my underwear and get ready to go home.”

On the same lap, Jamie McMurray went low into the corner when his brakes failed and the No. 1 caught on fire attempting to stop.

“I didn’t really even see the No. 48 (Jimmie Johnson) car wrecking until I just went down and I got on the brake pedal and my pedal started to go to the floor and I had a little bit that I could kind of pump it and I thought I was going to be okay,” McMurray said. “And then, I don’t know if I got into some oil or what happened, but I just started spinning and didn’t have any brakes. So, it was really weird that we kind of both had the same thing happen at the same point on the racetrack, but fortunately, we are both okay and yeah, move on.”

NASCAR red-flagged the race for 23 minutes and 25 seconds. The race returned to green on Lap 99 for a one-lap shootout to determine the stage. Larson led the field to the green flag and held on for the stage win.