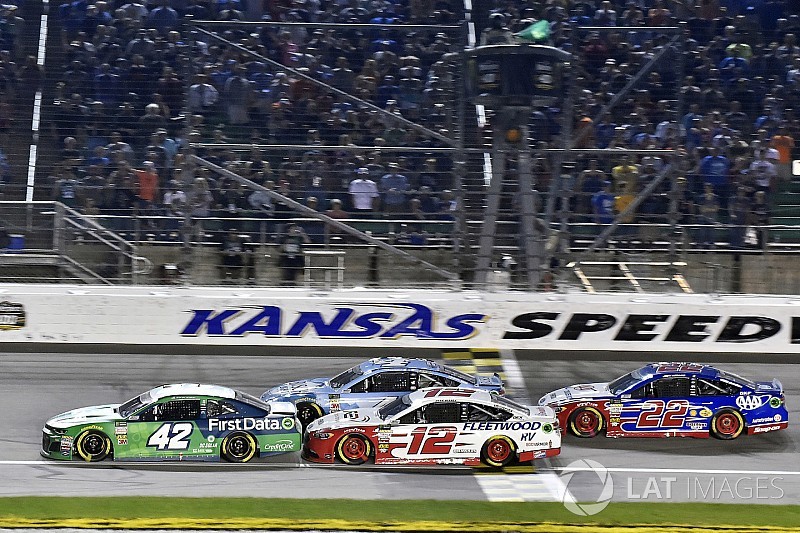 On Tuesday, Kyle Larson was assessed an L1 penalty from NASCAR for a rear window issue stemming from last weekend’s race at Kansas Speedway.

Larson’s No. 42 Chip Ganassi Racing Chevrolet was penalized because its rear window support braces did not keep the rear window glass rigid in all directions at all times and the rear window was not flush with the deck lid as the rulebook requires.

Crew chief Chad Johnston has been fined $50,000. Car chief David Bryant has been suspended from the next two Monster Energy NASCAR Cup Series points events (not including the All-Star Race). The team has also been assessed with the loss of 20 driver points and 20 owner points.

Ganassi will not appeal the penalty and has not yet decided on a replacement car chief.

“Although all parties agree that the infraction was unintentional and the result of contact, we will not appeal the penalty so that we can focus our energy on the All-Star race and the Coca-Cola 600," the team said in a statement.

In Saturday night’s Monster Energy NASCAR Cup Series race, Larson was involved in an incident with Ryan Blaney on Lap 249 of 267 while the two raced for position. Blaney drifted up the track and hit Larson, then hit the wall and Larson had taken damage to the left-rear.

It was shortly after the incident Fox Sports 1 TV announcers made note of a significant dent in Larson’s rear window.

NASCAR inspectors swarmed the car after the race and announced later it was being taken to its R&D Center in Concord, N.C., for further inspection.

After the race, Larson said he believed the window problem as a result of his run-in with Blaney.

“I didn’t have it until after Blaney and I got together,” he said. “So, I’m glad to see that we have a lot of damage back there because obviously if there was no damage back there, we would probably get a penalty, and who knows, we might still.”

“It’s an area we continue to focus on because the teams know they’ve found something there,” he said.

At least three other Cup teams – those of Kevin Harvick, Chase Elliott and Clint Bowyer – have been penalized for the same issue already this season.

In an appearance on SiriusXM NASCAR Radio Tuesday afternoon, NASCAR's senior vice president of competition, Scott Miller, said it was time to up the penalties for infractions.

"We got to wind out of these penalties. We've had too many of these rear window violations," he said. "This has to stop. From this point forward, we're prepared to ramp up the penalties to the high end of the L1 (infraction level) to see if we can get the message because obviously what we're doing now is not really working.

"If we get down the road and that doesn't work, then we'll ramp the penalties up even further.It's one of these things that as an industry, we have to stop."