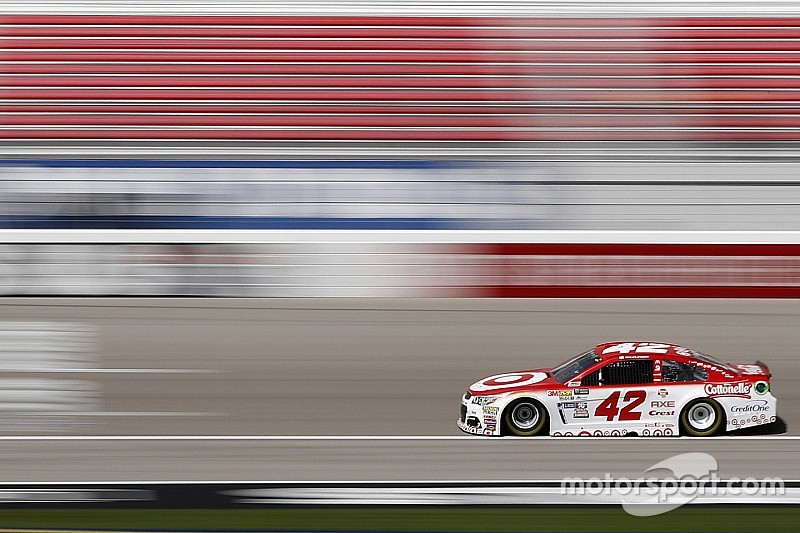 With a second-place finish at Las Vegas Motor Speedway, Kyle Larson vaulted to second in the Monster Energy Cup standings.

For Larson, 24, it was his first top-five finish at the 1.5-mile track in his fourth-career Cup start.

But the dirt-track racer is making use of his open-wheel roots as NASCAR evolves into stage racing — and Sunday’s Kobalt 400 was no exception.

“The stages were really exciting or the ends of them, because of the way the cautions fell and different pit strategies and stuff, people staying out made it exciting taking off,” Larson said. “Really liking the format change.”

Larson, who started fifth, finished second in the first stage at Vegas and third in the second stage before posting his second-straight runner-up finish of the season. Keselowski and Larson, the only two drivers to finish in the top 10 in eight of the first nine stages, are separated by just one point in the Cup standings.

“Awesome day for our Target team,” Larson said. “Second in the first stage, third in the second stage and then finished second in the race. I can’t say enough about my team. I’m so proud of them. Our race cars are amazing right now. We are going to hopefully, keep building on what we’ve got and keep challenging for wins and they will come.”

Although Larson was expected to take the sport by storm when he first arrived in 2012 — particularly after winning twice in the K&N Pro Series East tour — it took a while for the Elk Grove, Californian to acclimated to stock cars and trucks.

His first major tour NASCAR win came at the iconic Rockingham Speedway in a stand-alone Camping World Truck Series race in 2013 in his fifth-career start. That same season, Larson finished eighth in the Xfinity Series as a rookie.

When Larson transitioned to full-time Cup competition in 2014, he missed the Playoffs but blossomed those final 10 races with three top fives and six top 10s. In a limited NXS-run in 2014, Larson scored two wins on that tour with an average finish of 8.4.

Larson’s first Cup win would come two years later after Chip Ganassi Racing recruited Chad Johnston to be crew chief for the No. 42 Target team. Larson won the second Michigan Speedway race to qualify for his first Chase and finished ninth in the Cup standings.

But this season, Larson is off to the best start of his NASCAR career. A tire issue for Brad Keselowski, who was leading the Kobalt 400 with three laps remaining in the race, enabled Larson to advanced from third to a second-place finish. While he’s enjoying the ride, it’s clear Larson wants more.

“Had a lot of fun today,” Larson added. “Had a bad restart there after the second stage and lost a lot of track position, but was able to get a good restart there on that last one.

“Brad, I think he was blowing up or something and got luck there and got second.  Back-to-back second’s we would like to have back-to-back wins, but this is pretty awesome.”

Keselowski loses win but stays positive: "We’ve got a lot to be proud of"