Labonte returns to Dover, site of his 1st Cup race 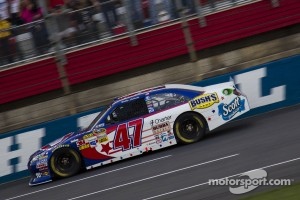 Over the years, the No. 47 SCOTT Products Toyota Camry driver has found ways to give back to the community whether it’s through the Bobby Labonte Foundation or more recently during his upcoming participation in the annual Drive for Autism Golf Outing at the DuPont Country Club in Wilmington, Delaware this Thursday.

“I enjoy going every year and it’s one of those deals I put on my calendar when I know that date so I can make sure I’m there,” Labonte said. “Artie Kempner does a great job putting it on. He’s done so much, not just for autism, but for our sport. Me being there is just a small token of appreciation. I look forward to playing in it.”

After Labonte and others from the NASCAR community help raise awareness and funds serving people affected by autism, they travel to Dover International Speedway to prepare for the FedEx 400 benefiting Autism Speaks on Sunday.

“Dover is a fun track, but it is also a challenging track,” Labonte said. “It’s still somewhat of an aero-track, but it is not quite as critical at other places on our schedule. It has a lot of short-track characteristics too. It’s fast and I love going there because it is so different. We’ll have SCOTT Products on board with us this weekend. We’re looking forward to having a good weekend and appreciate their support and all of our sponsors on board.”

“I took my own race car I built in my shop and completed about a third of the race before my engine blew up,” Labonte said. “It was a really good experience, but after running two races that year I didn’t think I was quite ready to move up to the NASCAR Sprint Cup Series. So, I went back to the Busch Series (called NASCAR Nationwide Series today) for a couple more years. When I felt ready, I moved up. Looking back, it was a good experience.”

Labonte’s track record at Dover is rather impressive too. On June 6, 1999 driving for Joe Gibbs Racing, Labonte won from the pole beating out guys like Jeff Gordon, Mark Martin, Tony Stewart and Dale Jarrett respectively. Thanks to a smart pit call by his former crew chief Jimmy Makar, Labonte benefited and went the final 107 laps at the Monster Mile without pitting to have a 22 second margin of victory.

“We had a fourth place car, but it came down to fuel mileage,” Labonte said. “With about 50 to go I started to lay back a little bit. I really laid back with about 10 to go because the fuel pressure was dropping down. It was really close. We weren’t quite as good as the 24 (Jeff Gordon) and some other guys that day, but we were able to pull it off and win by a 22-second margin of victory.”

In addition to his win, Labonte has 11 top-five finishes, 14 top-10 finishes, a total of three pole awards and has led 148 laps in 39 starts at Dover. It is safe to say the Corpus Christi, Texas-native is a fan of the one-mile oval with 24 degree-banking.

“It’s just a neat place and it has always been a good race - - no matter if the surface was asphalt or concrete,” Labonte said.

Biffle talks about being points leader with Dover media on Friday

Jeff Gordon "impressed and optimistic" by NASCAR Next Gen car