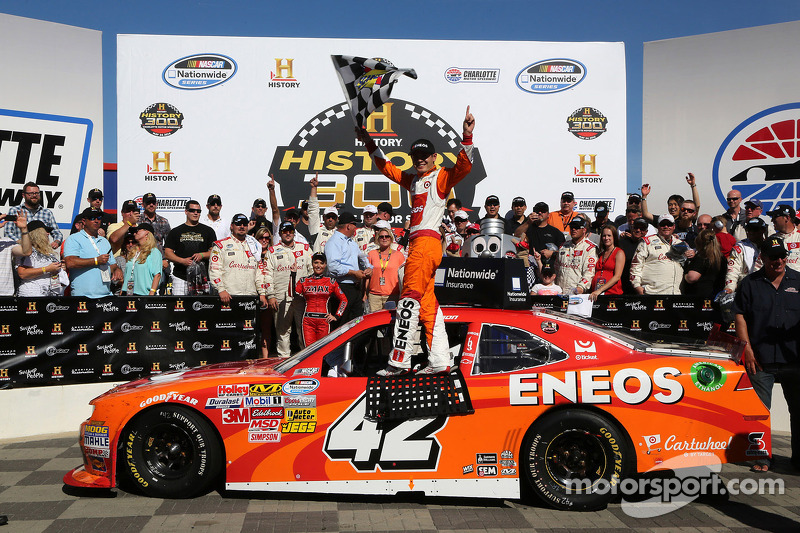 The ENEOS brand, part of JX Nippon Oil & Energy Corp., the largest oil company in Japan, signed on to sponsor Larson’s No. 42 Turner Scott Motorsports Chevy for two races in 2014, including the History 300 at Charlotte Motor Speedway.

In the company’s first pairing together, Larson, who is the only Japanese-American driver in the Nationwide Series, carried the new livery to victory lane.

“It was about perfect for us from the time we rolled off the truck Thursday,” Larson said. “I was worried on that last restart because we weren’t very good on short runs, and we were really good on long runs.

“I knew if I could get the lead, the car would be really tough to beat. That’s kind of how it went for us… I love Charlotte and will be back for the 600 tomorrow.”

Chip Ganassi Racing announced the new sponsorship on May 10th. ENEOS will also be the primary sponsor on Larson’s Nationwide ride at Bristol Motor Speedway on Aug. 22 and an associate sponsor throughout the season.

“We think the partnership with ENEOS makes perfect sense for our team given who they are as a brand,” said Steve Lauletta, president of Chip Ganassi Racing. “Additionally, it will be great to connect a Japanese company with Kyle Larson, the only current driver in the NASCAR Sprint Cup and Nationwide Series with a Japanese heritage. We feel like the partnership in NASCAR will help build the ENEOS brand amongst current race fans and further expand NASCAR to a new group of fans and other potential business partners.”

Larson, 21, is enjoying a remarkable second season in the Nationwide Series. In addition to scoring his second career win on Saturday, Larson has posted seven top-five’s and nine top 10 finishes in 10 starts. The only race he didn’t finish on the lead lap was at Talladega Superspeedway on May 3.

“I think it’s cool for ENEOS to come on for a couple of races,” Larson said prior to the race. “It seems like they are try to get more involved in things in the U.S. and to have them be from Japan and me being half-Japanese, makes it a great combination. The car looks great.

“I thought before that (his heritage) might help attract sponsorships. Hopefully, they'll like the partnership and stay with us for a while.”

“Our ENEOS team is proud and eager to kick-off this partnership with Kyle Larson and Chip Ganassi Racing in the great American sport of NASCAR,” said Motoshi Sunami, President and CEO, JX Nippon Oil & Energy USA Inc. “Kyle has proven his talent in the sport, as well as his ability to successfully represent his partners.

“ENEOS has developed advanced lubrication technologies over decades of research that will have a strong presence in NASCAR.”