Kyle Busch: "You want to race the best of the best" for Cup title 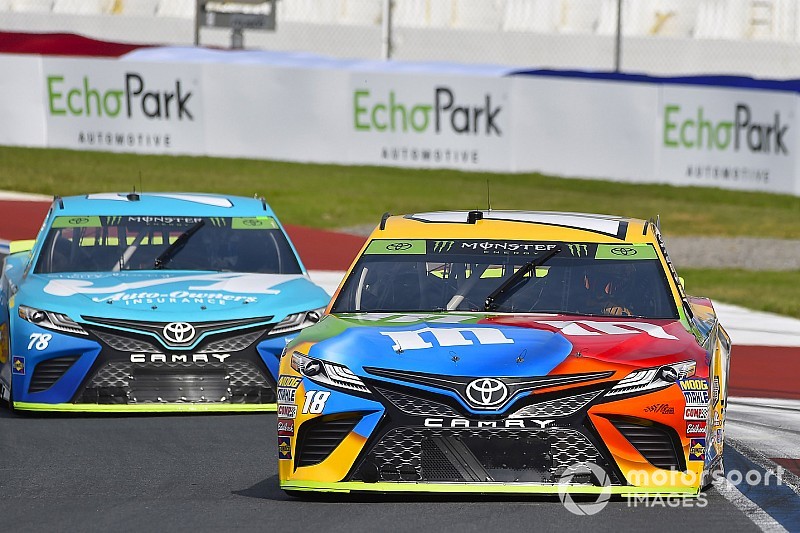 Kyle Busch says he prefers to race “best of the best” when competing for the Monster Energy NASCAR Cup Series title and he presumably has gotten his wish.

When the dust settled Sunday at Phoenix, the “Big 3” of Kevin Harvick, Busch and Martin Truex Jr. – which had dominated the series all season – found themselves locked in to compete for this year’s championship at Homestead, Fla.

Joining those three will be Joey Logano, who earned his way into the Championship 4 by virtue of his win at Martinsville, Va.

“Yeah, you want to race the best of the best, so you know, it's the best that are there and that we all probably thought would make the final four,” Busch said Sunday after winning the race at Phoenix.

“And you know, there was obviously a lot of back-and-forths as to who could and what happens in this scenario and that scenario, but lo and behold, it all points to the top four guys.”

While Logano, with two wins on the year, was never part of the “Big 3” combination during the season he has developed into one of the top performers as the playoffs have progressed.

“The strength of the season has kind of been the top three guys, the best three, which has been (Harvick), us and (Truex) and (Logano). The. No. 22 (Logano) has been solid. He’s been consistent, and he’s been good, especially these last nine weeks, eight weeks, I guess,” Busch said.

“He’s kind of been the top scorer. He was in the first at weeks of the season, as well, too. He had a good run there. So, I think that this is a good group of four that we’re going to race for a championship with.”

So far through nine playoff races, Logano has scored more points than any other driver (343). Kevin is second, Truex third and Busch fourth.

Harvick has led the most laps during the entire season (1,932), followed by Busch, Truex and Logano.

Busch has the best average finish (8.4), followed by Harvick, Logano and Truex.

Harvick has the most top-five finishes (22), followed by Busch, Truex and Logano (who is tied with Kyle Larson).

Busch also said he would not be at all surprised that at some point in this weekend’s championship race, the four title contenders will be running first, second, third and fourth.

“It’s happened every single time these last four years that I’ve been in the playoff race at Homestead, that all of us have been around one another at one point or another in the race,” he said.

“The long green flag runs tend to separate you a little bit more. I remember the year that I won (2015), Jeff Gordon was out there and we were all top four, top-five riding around one another, whatever, and over the course of that long green flag run that we had, I think Jeff kind of faded and fell back to like eighth or ninth or something like that.

“Those are the times in which yourself and your team and your car and everything kind of brings itself to the forefront. That’ll kind of change the name of the game for who’s got it and who doesn’t.”

How David Pearson became one of NASCAR’s legends