Kyle Busch succeeds at The Glen in dramatic finish 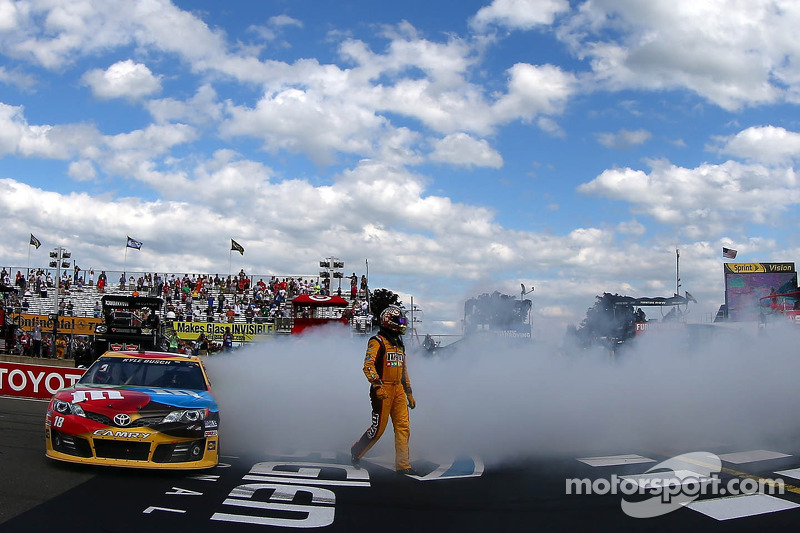 On the road course in the Finger Lakes region of New York, Joe Gibbs Racing’s Kyle Busch had his Toyota in the hunt throughout the race to nail down the NASCAR Sprint Cup victory.

Watkins Glen, N. Y. – Kyle Busch was in the right place at the right time, and with the race on the line, the talented driver seized upon the opportunity to win the Cheez-It 355 at The Glen, the 22nd race of the NASCAR Sprint Cup Series season and the final road race of the year.

To cop the hard-fought victory, he had to survive multiple caution flags toward the end and a late-race all-out assault from Brad Keselowski.

When Busch prevailed, he made up for a pair of near wins the last two times out on the Watkins Glen International road course.

“It was certainly beneficial to win a race here before the Chase starts,” the victor said. “Today, the guys did a good job for me, as they have done all year long. And today was just showed the fruits of their labor being able to get me up front, lead those laps toward the end of the race and be able to win at the end.

“I had some close calls and one time with (Martin) Truex in the esses and the inner loop when I thought I could out-brake him. And those cautions at the end and I felt out car was better on the long runs, and it seemed like I could stretch it out. On cold tires the car wouldn’t turn too well but was able to hold off the guys behind us.”

Added crew chief Dave Rogers, “We had a good baseline from last year, and we built a new car for the road-course races. This is one of those races where you have to dot your i’s and cross your t’s; otherwise you can take yourself out of it. The guy did a great job. I felt like I missed the set-up but Kyle made up for it. Our fastest laps came at the end, which is what we needed.”

Commenting on the late-race tussle with Keselowski, Busch stated, “What saved the race for us was the launch I got out of the carousel. If had gotten any closer there, he could have out-braked me and been able to pass me. It was fun, and I am glad it worked out the way it did.”

Busch drove the M&M’s Toyota owned by Joe Gibbs Racing and his margin of victory was a scant .0486 seconds. And he scored the 27th Sprint Cup victory of his career and his second win and the eighth top-10 finish at Watkins Glen. He led 29 laps.

Keselowski gave it his all in the last two hard-fought laps but came up short, to finish second in the Miller Lite Ford. His run was particularly impressive as he spun off the course early-on.

“We were strong but we weren’t quite strong enough,” the Sprint Cup champion said. “We were definitely really close, and we’ve been close over the last three years, but just came up a little bit short on the last lap. That stinks, but that’s racing. We had a shot at it.”

Regarding the late-race dual with Busch, he added, “I was gonna have to wreck him to really get it, and I didn’t want to do that. I thought I could cross him over on the last corner, but I just couldn’t quite pull off the move.”

Martin Truex Jr., who won at Sonoma in June, backed it up with a strong third-place effort.

“All in all it was a good day,” Truex said. “Obviously, we wanted to win this race. It would have meant a lot to us. We were a third-place car all day, just missed it a little bit. When you can see the leader all day, and you can’t do anything about it; that’s a tough day.”

With four races to go in the Sprint Cup regular season, Johnson leads Bowyer by 75 points with Edwards 80 back and Kevin Harvick back. Kyle Busch is fifth ahead of Dale Earnhardt Jr., Matt Kenseth, Keselowski, Greg Biffle and Truex.

Johnson’s seventh place clinches at least a wild card spot for him in the Chase for the NASCAR Sprint Cup.

Gordon’s accident happened early and after substantive repairs, he returned to finish 36th 16 laps off the pace.

By far, Marcos Ambrose was the hard-luck driver of the day as he outclassed the field for more than half the race, leading 59 laps. But his bad luck started when he made his final pit stop under the green flag, only to have the caution flag displayed a lap later, allowing Busch and others to pit at that time.

Busch powered to the front on restart with Ambrose back in 14th place. Although the fleet Aussie partially rallied, he wrecked with four laps to go after tangling with Max Papis and Brian Vickers.

In addition to the Ambrose wreck, two additional multi-car accidents took place, one of which stopped the race on the 40th lap. That incident started as the back of the field was powering through the esses. Travis Kvapil and Ron Fellows came together with several others involved, blocking the track and forcing the stoppage.

Said Ambrose, “I’m just really disappointed for my Stanley team. Something was wrong with the car (at end), and I just couldn’t get going on the restart. That’s not the way we wanted to finish our day.”

With eight laps to go, Kahne, Earnhardt Jr. and four others came together in turn four.

Marcos Ambrose laments the one that got away