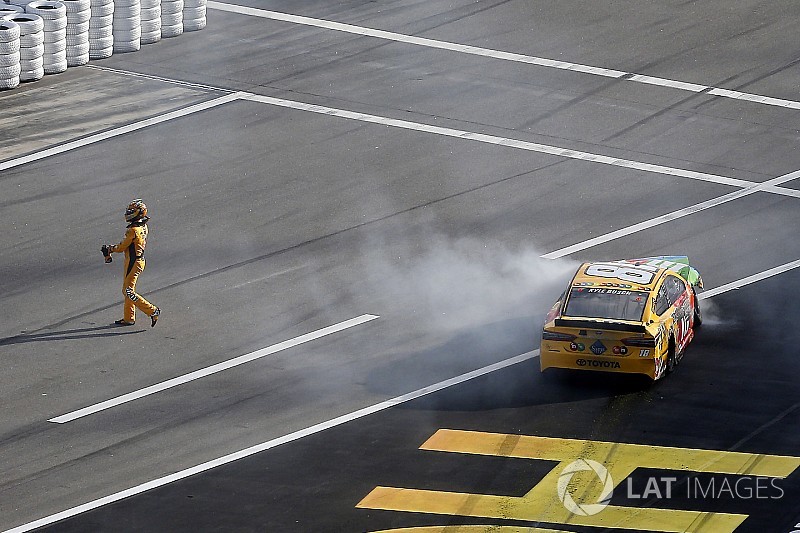 Sunday’s Advance Auto Parts Clash did not go as Kyle Busch expected – not at all.

And that’s not because he was involved in a last-lap wreck.

Team Penske’s three drivers, led by race-winner Brad Keselowski, remained together late in the race on the high-line, which in turn left much of second half of the 75-lap race at Daytona International Speedway run in single-file.

“The race was kind of backwards,” Busch said after finishing seventh despite the wreck. “Early on, we were getting kind of dicey and more things happening then instead of later in the race.

“The second half was kind of single file. Normally, it’s the other way around. It was just unfortunate that we got caught up in that and I wish we were a little farther ahead at that time.”

The first 25-lap segment saw drivers much more willing to experiment with different lines on the track and making bold moves to gain position or even to take the lead.

“Normally you kind of start settled out and then you start to go after it later in the race,” Busch said. “I think that the outside lane just over-powered what the inside lane was.

“There were too many guys that were up there and wanted to stick together in a line with the Penske guys and that strength of that speed in their cars over-powered the inside line. They just all kind of stayed to the outside and that’s where the speed was.”

It didn’t help the field had just 17 entries – less than half of a normal field and what drivers will face in next Sunday’s Daytona 500.

In addition, by late in the race, both Ryan Newman and Kevin Harvick had lost the draft and Jamie McMurray had wrecked out of the race, leaving 14 cars in contention in essence.

Looking ahead to the 500

Busch said if a single-line is going to dominate the 500 next week, he would like to find a way to create some separation between the cars to help provide drivers the opportunities to make moves.

“I thought we were out-handling a couple guys we were watching in front of us anyways, we just never got the opportunity to get up front or have the field kind of separate a little bit more,” he said.

“I would like to see more separation if we can get that with something in order to make the race where drivers have to come more into play instead of just driving the heck out of your car because your car is the same as the guy in front of you.

“Overall, we’ll take this as a learning experience with this new package and head into the 500.”

Jimmie Johnson wrecks out of Clash for seventh consecutive year