© 2021 Motorsport Network. All rights reserved.
TV Buy tickets Store
Previous / Follow the leader at Talladega: Drivers explain end of race Next / This is a test…this is only a test.
NASCAR Cup / Breaking news

Kyle Busch returns to the cockpit of a race car 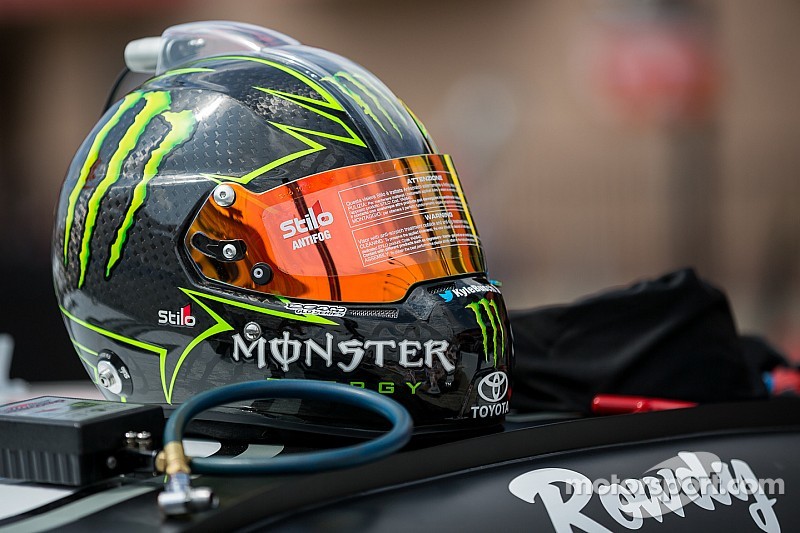 TALLADEGA, ALA. — Following a 10-week absence from a race car, Kyle Busch got behind the wheel of a Late Model last week.

Busch, the driver of the No. 18 M&Ms Toyota, has been sidelined since he sustained injuries to his foot and right leg during an accident in the XFINITY Series race at Daytona International Speedway on Feb. 21.

A recovery program in place

“We have a program for him and we’re moving forward with everything — and that was part of it,” team owner Joe Gibbs said of Busch’s test, prior to the Geico 500 at Talladega Superspeedway on Sunday.

Gibbs did not recall where Busch tested his Kyle Busch Motorsports car, however, the team was expected to run at nearby Caraway Speedway, a .455-mile track in Asheboro, N.C. or Hickory (N.C.) Speedway. Busch is expected to return to Hickory to test this week in a KBM Late Model.

NASCAR spokesman David Higdon said he had not heard whether Busch had been medically cleared to return to competition. Busch met with the media on April 15. At the time, Busch said his doctors had not offered a timetable for his return. Erik Jones is scheduled to drive the No. 18 M&Ms Toyota next week at Kansas Speedway, but speculation is that Busch will be in the car for the All Star race at Charlotte Motor Speedway on May 16th.

During his media availability, Busch said he hoped to be eligible for the Chase for the Sprint Cup. Last month,  NASCAR Chairman and CEO Brian France told a group of sports editors that depending on when Busch returned “it was more likely than not,” that the sanctioning body would attempt to “accomodate” the driver.

France added, “what happened to him was on us.”

"We'll balance a lot of things at that point when we have to make a decision, but we're inclined to want to figure that out for sure,” France added.

Busch, who turned 30 on Saturday, is one of NASCAR’s elite drivers. He has 29 wins, 118 top fives and 178 top 10 finishes in the Sprint Cup Series. The “King of the Minors” has scored 70 victories in the XFINITY Series and 42 truck wins.

Follow the leader at Talladega: Drivers explain end of race

This is a test…this is only a test.