Make it three in a row for Kyle Busch. 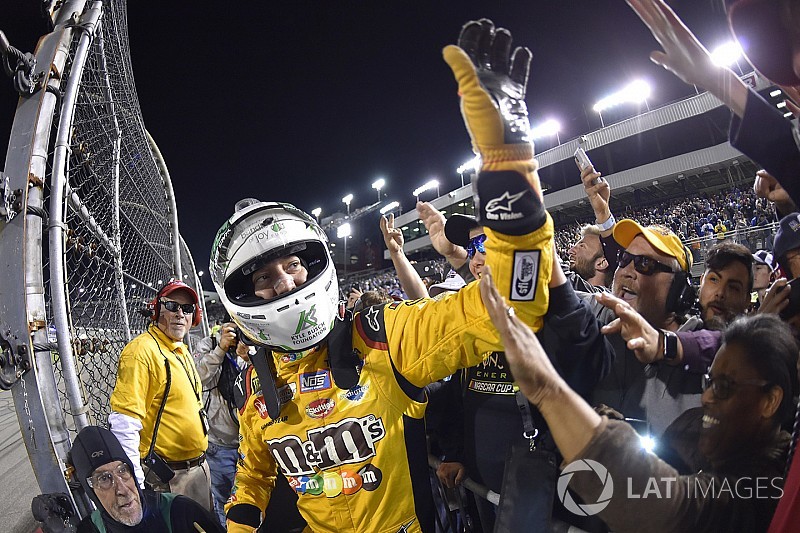 Busch jumped out to a lead in overtime and held off Chase Elliott to win Saturday night’s Toyota Owners 400 at Richmond (Va.) Raceway for his third consecutive victory in the Monster Energy NASCAR Cup Series.

That matches the longest winning streak of Busch’s career and ties Kevin Harvick’s mark set earlier this year for the longest of the season. The win is Busch’s 46th of his career.

"We just had to work, man," Busch said in Victory Lane after starting 32nd. "All these guys, everybody on this No. 18 M&Ms team, they do a great job for me. I can't say enough for (crew chief) Adam Stevens and my guys.

"The pit crew crew won this race for us tonight. They got us off pit road first those last two times we came down for tires. They got us where we needed to be."

Asked about what it means to win three in a row, Busch said,"It's definitely cool. We did it a couple years ago. Now I don't know if we can shoot for four in a row. It's hard to go to Talladega with that much of a winning streak and think you're going to get to Victory Lane.

"But we're going to go there anyway and give it a shot. We'll see what we can do."

Through nine races this season, Busch has three wins and three runner-up finishes.

Following pit stops during the break between Stages 2 and 3, Logano was again the first off pit road and restarted the final stage still in the lead. He was followed by Kurt Busch and Bowyer.

Ryan Newman had an uncontrolled tire penalty during the stops and Byron and Alex Bowman were both penalized for speeding on pit road. All three began the final stage from the rear of the field.

Kurt Busch quickly moved into the lead, passing Logano in Turn 2 on the restart.

On Lap 232, Bowyer moved into the second position behind leader Kurt Busch as Logano remained in third.

Martin Truex Jr. got back into the mix for the lead, moving into the third position on Lap 239.

Bowyer once again made his way into the lead, passing Kurt Busch for the top spot on Lap 252. Six laps later he had already moved out to a 1.6-second lead.

Several teams headed down pit road on Lap 270 to begin a round of green-flag pit stops. Bowyer, the leader, hit pit road with 127 laps to go.

Darrell Wallace Jr., Ricky Stenhouse Jr. and Austin Dillon were all penalized during their stops for a commitment line violation.

Once the cycle of stops were completed on Lap 277, Truex held the lead followed by Bowyer and Harvick. Kurt Busch dropped to ninth after Suarez collided with Busch’s air hose and disrupted the No. 41’s pit stop.

With 89 laps left in the race, Harvick moved into the second position behind leader Truex.

With 83 to go, Stenhouse slapped the wall in Turn 1 but there was no caution called and he continued on.

Harvick went to the outside of Truex with 78 laps remaining to take the lead in the race for the first time.

Another round of green-flag pit stops began with 72 laps left in the race. Ryan Blaney was penalized for an uncontrolled tire during his stop.

Once the cycle of stops were completed with 65 to go, Truex moved into the lead followed by Bowyer and Harvick.

Ryan Blaney, Cole Whitt and Stenhouse collided in an accident on Lap 352 to bring out the first non-stage caution of the race. Stenhouse had just come off pit road after completing his green-flag pit stop for new tires.

All of the lead-lap cars pit for fuel and tires and Truex was first off pit road and maintained the lead on the restart on Lap 361. He was followed by Harvick and Kyle Busch.

Kyle Busch got around Harvick and moved into the second position shortly after the restart.

Ryan Newman’s engine appeared to let go to bring out another caution with 33 laps left in the race. Lead-lap cars again hit pit road with Kyle Busch first off to take over the race lead when the race restarted with 22 laps remaining. He was followed by Hamlin, Truex, Harvick and Keselowski.

Kyle Busch moved out to a quick advantage as Truex moved into the second position after the restart.

With 10 to go, David Ragan cut down a tire and hit the wall to bring out another caution. Once again, Kyle Busch was the first off pit road, followed by Hamlin, Harvick, Logano and Elliott. The race returned to green with six laps remaining.

With four to go, Stenhouse wrecked to bring out yet another caution and send the race into overtime. On the restart, Kyle Busch led the way, followed by Hamlin, Elliott, Harvick and Logano.

Denny Hamlin on third-place run: "We got close there"