Kyle Busch: Logano is "who we’re racing" at Phoenix 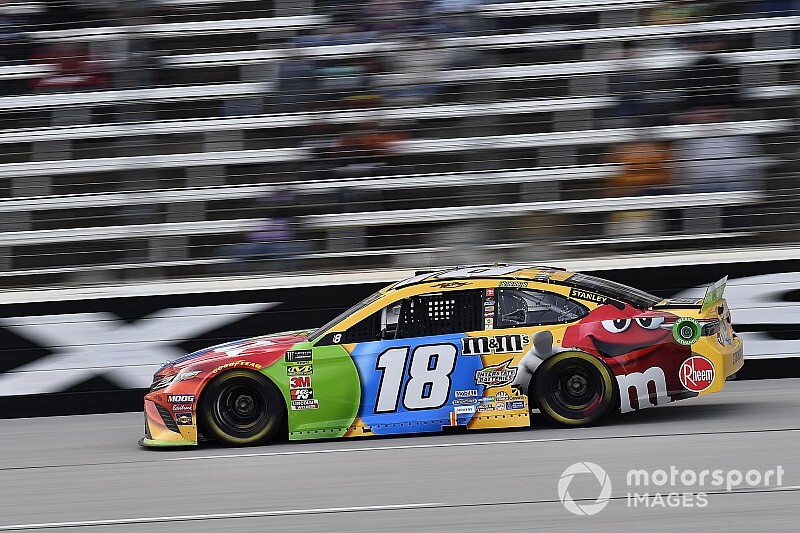 Kyle Busch came away from Texas Motor Speedway with a solid showing, but he remains in an uncertain spot heading into the penultimate race of the season.

“I don’t know, I was running wide open there and those guys were just driving away," Busch said. "We got what we got out of our M&M’s Camry tonight. Adam (Stevens, crew chief) made some good adjustments. The whole first set of tires was just ugly for us. Once we got past that and got some other tires on the car, it seemed to go a little bit better. It was hard battling some of them guys up there and up through traffic and what not. We should have run third and ran out of gas and starved the pump there at the end. Then I was stalled on pit road. That cost us four or five spots there.”

Busch leaves Texas 22 points above the cut line, but just two points up on the final transfer position. That spot is held by Joey Logano, the reigning series champion. Busch's Joe Gibbs Racing teammate Denny Hamlin finds himself below the cut line and likely in a must-win situation. Should Hamlin or one of the other drivers below the cut line win at Phoenix next weekend, whoever is fourth in the standings will be booted from the playoffs.

“We all know one guy is going to move through on points and we have to do whatever we have to do in order to be that guy. If we can obviously go to Phoenix and have a strong run and be able to go out there and win, that will put ourselves through as well too. We’re two (points) on the 22 (Joey Logano) so it’s going to be a race between the 18 and the 22, imagine that.”

Busch lost several spots during the final set of green-flag pit stops as the No. 18 took a moment a to re-fire and those points could prove crucial as the playoff fight heads into a cutoff race.

"That sucked and cost us four or five spots on the track I guess," he admitted. "That was about six points because the 22 (Logano), we flipped there. We were ahead of him and that would have been a great eight-point cushion on the 22 going into next week, but now it’s only a two-point cushion. That’s who we’re racing is the 22. No matter what anyone else does, if we finish ahead of him then we’re in.”

Logano expects it to be a "good battle" between he and Busch as they fight to ensure their place at Homestead. "Obviously the 18 team is good and Kyle is a good driver but I think we are a great team and they are beatable just like everybody else.”

Chase Elliott, Ryan Blaney and Kyle Larson are the other three drivers who will enter Phoenix.

Once a title favorite, Hamlin's championship hopes in doubt

Almirola on battling for the Texas win: "I want to do that more"