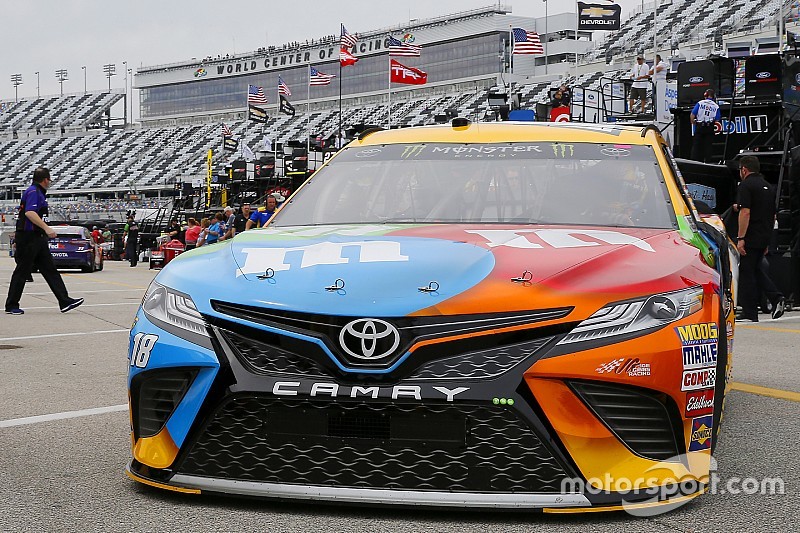 The Joe Gibbs Racing had the top three speeds in the draft with Kyle Busch (197.265mph) leading the way followed by Matt Kenseth (197.256mph) and Denny Hamlin (197.109mph). JGR’s effort appeared eerily similar to last February, where five Toyotas aligned to push Hamlin to the win.

Rookies Erik Jones and Daniel Suarez rounded out the top five with a speeds of 197.053mph and 197.036mph, respectively.

Dale Earnhardt Jr. was one of the first cars on the track. Paul Menard quickly joined the conga line along with Chase Elliott, Ty Dillon and Trevor Bayne. Earnhardt’s best lap was 194.477mph He ran 10 laps in the draft and practiced hot-pitting before returning to the garage during his first run.

Two minutes later, the six Toyotas of Joe Gibbs Racing and Furniture Row Racing lined-up to push the No. 11 of Denny Hamlin to the top of the leader board in two laps. Martin Truex Jr. was fastest on the third lap, but one lap later, Hamlin regained the lead. The Toyotas completed 14 laps together before Kyle Busch, who was the fastest of his teammates, experienced a vibration with his roof flap tether came loose and elected to abort. The remaining cars ran an additional eight laps.

As the Toyotas left the track, a pack of Chevys returned at the 24-minute mark with Ty Dillon leading the five cars which included Menard, Johnson, Elliott and Earnhardt.

In the final 15 minutes, the JGR Toyotas of Busch, Kenseth, Hamlin and Suarez lined up again to finish out the session . With just four cars — and spending most of the time swapping positions — the Toyota’s top speed was 194.233mph by Kenseth who ran at the back of the back.

Twenty-eight drivers participated in the 55-minute session with Kenseth and Hamlin completing the most laps — 39.

Despite detractors, Roger Penske believes NASCAR “is in great shape"