Kyle Busch: “It just wasn’t meant for us this weekend” 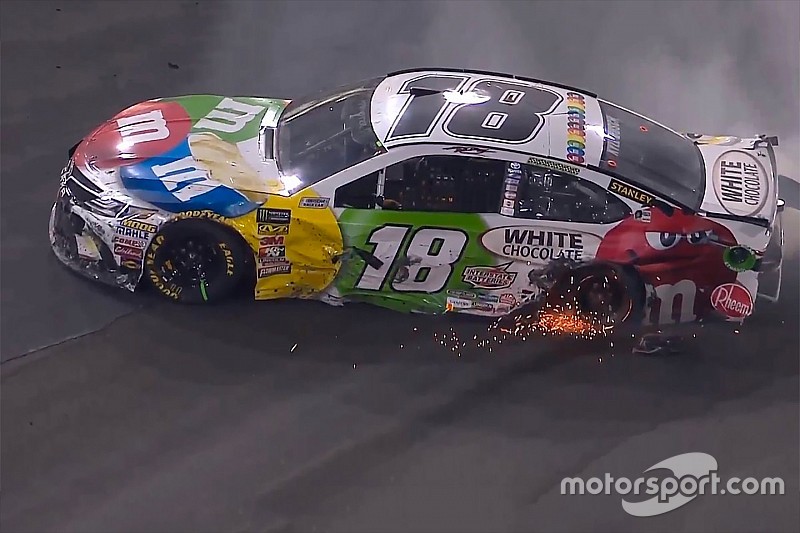 Kyle Busch rebounded from nearly three laps down after an early accident Saturday night at Bristol (Tenn.) Motor Speedway to run as high as second before he faced more adversity.

After spinning near the front of the field on Lap 2 that collected 15 cars and badly damaged his No. 18 Toyota, Busch showed everyone why he’s considered one of the most talented drivers in NASCAR.

Busch rebounded from the incident to run as high as second in the late stages of the race only to spin out following a flat tire on Lap 483 of 500, relegating him to his a 20th finishing position.

When asked how he was able to come back and contend for the win, his answer was simple.

“That was just me and this team and never giving up and being able to drive up through the field like that,” said Busch. “This (car) was fast, even torn up and wrecked and everything else, it was fast.

“We had a shot to win the race there, just got to racing with guys three-wide and couldn’t get clear of them and was boxed in by (Denny Hamlin) and he was choking up the top in front of me.”

Busch also admitted that in hindsight that if they would have tried a different strategy during a late yellow, the outcome might have been different.

“Ifs, ands or buts, we should have never been in that position with how torn up this race car was. We probably finished where we should have, but we had a shot anyways.”

In addition to his spin early in the race, Busch was also involved in an incident with Martin Truex Jr. on Lap 433 while racing for second place.

“Hopefully, he’s alright and everything is okay there. I hated that I clipped him, I know he could have had a good shot to win the race, too.”

Not meant to be

Busch was a favorite to win Friday night’s Xfinity Series race as well, but wrecked out in the first stage.

“I don’t know what it was, it just wasn’t meant for us this weekend I guess,” Busch said. “You come in here with a vengeance and try to go out there and be able to achieve and succeed and do what you need to do and know what you’re capable of doing and what both teams were capable of doing.

“I don’t know why we had a flat tire (Friday night), why it jumped the cushion – I wasn’t really even pushing that hard. The car was really good yesterday and it got in the wall and three laps later it had a flat tire and today I wasn’t even pushing that hard, I was just trying to maintain and not get hit and I ended up sliding up the race track and spinning myself out.

“We fought back all day long and just stupid circumstances at the end running three-wide with guys. Just wasn’t good.”

Kyle Larson: Second was "12 to 15 spots" better than we deserved