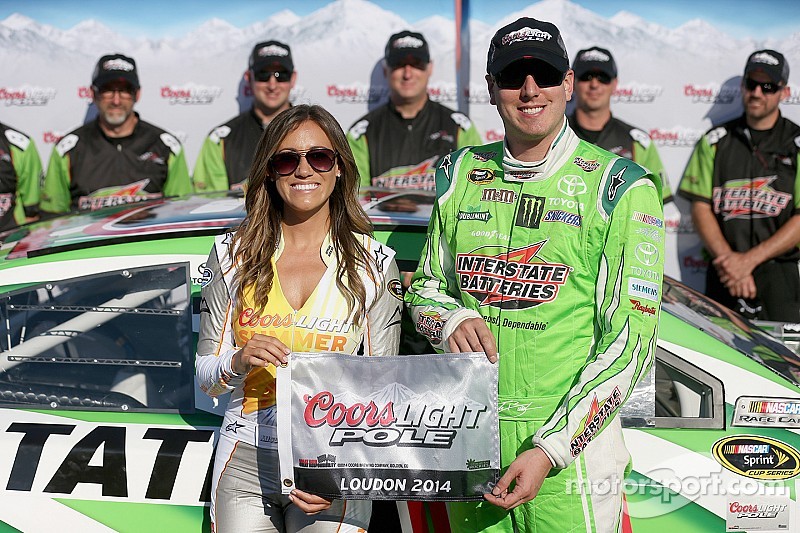 Kyle Busch and Jimmie Johnson will share the front row for Sunday's race.

In NASCAR Sprint Cup Series qualifications at the New Hampshire Motor Speedway, Kyle Busch not only claimed pole, but set a track record in doing so. Driving the Interstate Batteries Toyota, he went to the top of the charts and will lead the field to the green flad in Sunday’s Camping World RV Sales 301, with a record-setting run of 138.130 miles per hour.

Track records have been tumbling throughout the 2014 season and today marked the 13th time a new record was established during qualifications. Until now, Ryan Newman has set the standard at 136.497 mph, which has stood since September of 2013.

During the second round of qualifications, Busch went out late and held sway after taking just one lap in the first round. In total, nine drivers timed in under the previous track record.

Discussing his second pole of the season, Busch said, “This Toyota was good off the truck. This track has been good to us, as last year we got the pole in the same race, ending up second and second again in the fall race. We would love to continue that on and see if we can make it one spot better.”

Busch has one victory here, coming back in 2006. Commenting on his team’s qualification strategy, Busch added, “For some guys, it takes them two laps to get their cars to come in, but ours came in on the first lap. I made just one lap in the first session, and it was good enough for third quick at the time before dropping to fourth."

Jimmie Johnson qualified the Lowe’s Chevrolet on the outside of the front row at 137.790 mph. Said Johnson, “The cars are fast with this new rules package, and it has opened up technology and set-ups in a lot of different areas. In the end, we have been able to get the cars lower, so we have a lower ride height, which gives us lower down-force and makes the cars faster. We knew that track records were going to fall. After our test here, we left feeling good about things. I was very optimistic coming into qualifying and thought I had enough to get it there (the pole) until I saw Kyle’s lap.”

Row two qualifiers were Denny Hamlin and Tony Stewart with the third row going to Jamie McMurray and Joey Logano, who transferred to a back-up car after crashing during practice. Brad Keselowski and Clint Bowyer were next in line, trailed by Martin Truex Jr., Kasey Kahne, Jeff Gordon and Kevin Harvick.

Two rounds of qualifications were run. The first was 30 minutes in duration and included all 43 cars with the fastest 12 advancing to the second 10-minute shootout for pole. Hamlin led the way in the openign round with Logano, Keselowski, Kyle Busch, Johnson, Truex, Bowyer, Gordon, Harvick, Stewart, McMurray, and Kahne falling in line behind the Virginia-born racer. Hamlin’s speed was 137.195 miles per hour, one of 11 drivers to lower the track record.

Rookie Kyle Larson and Sonoma winner Carl Edwards timed in 13th and 14th to fill out the seventh row on the grid. Dale Earnhardt Jr. claimed the 28th position, and expressed his frustration with the poor qualifying effort on Twitter.

72-year old Morgan Shepherd will start last in the Thunder Coal Chevrolet. In doing so, the veteran driver will make history as he becomes the oldest one to start a Cup race, coming in his 515th start. Eddie MacDonald will start 40th in the No. 32 tryandrozene.com Ford Fusion in what will be his Sprint Cup debut.

Sunday’s Camping World RV Sales 301 will commence at 1 p.m. ET, and be telecast live on TNT.

Almirola "along for the ride" at New Hampshire