Kyle Busch: “I was going to plow the fence” without lifting 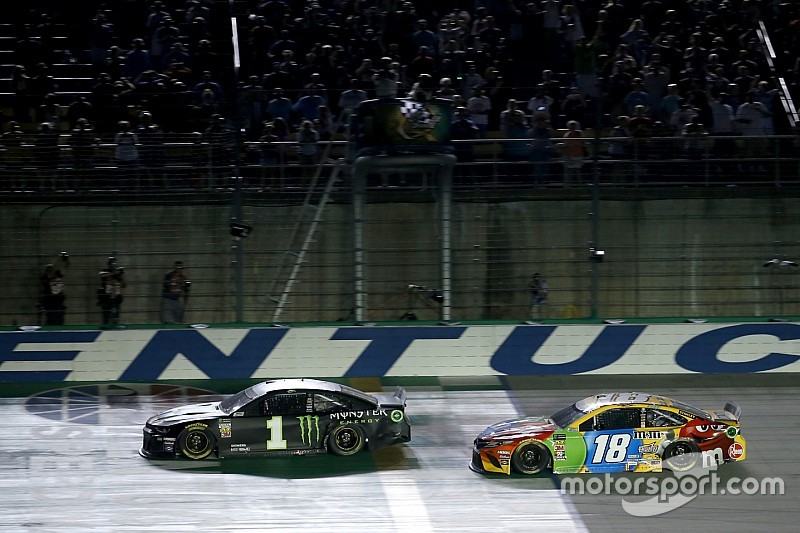 Kyle Busch finished a close second to his older brother Kurt in a wild last-lap battle for the win Saturday night in Kentucky.

Despite fading towards the finish, Kyle Busch once again showed up at the finish of NASCAR Cup Series race. In a thrilling finish, he was forced to back down to keep from wrecking himself and his brother in the final turn of the final lap at Kentucky Speedway.

Busch restarted second to Joey Logano as the race went into a two-lap overtime. After passing Logano for the lead, he was run down by Kurt and then swapped paint with his brother in the closing moments.

“I knew I cleared him into (Turn) 3, and if I just stayed in the gas, I was never going to make the exit, I was going to plow the fence, but maybe I should have just gotten in front of him and messed up his air,” said Kyle Busch.

“So easy to do with these cars. It's pretty much just an aero game. I missed my chance over there, I guess, and that's about all I could really have done different.”

The younger Busch brother admitted that he had to lift in the last corner coming to the checkered flag to keep from wrecking him and his brother while racing for the lead.

“I'm glad it was a thriller. Just unfortunately we were on the wrong end of the deal for everybody at M&M's and Toyota, Interstate Batteries, all the folks that get us to where we're at,” Kyle Busch said.

Although tempers have flared between the two siblings in the past, Kyle kept everything in perspective in regards to the hard racing and show they put on for the fans.

“Congratulations to Kurt and Chip and Monster and all the guys over there,” said Kyle. “It's obviously cool to put on great races and great finishes, and been a part of a lot of them and not very many ‑‑ in fact none with my brother like that, so that was a first.

“You know, no hard feelings, and we move on.”

Joey Logano: "I couldn’t block them all" on final restart