Kyle Busch and Larson collide in spectacular finish at Chicagoland 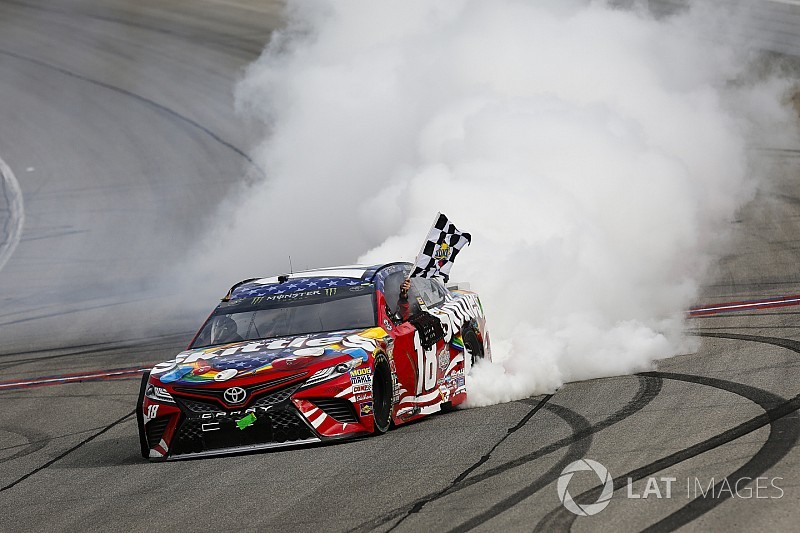 Kyle Busch and Kyle Larson hit each other on the final lap and Busch emerged with his fifth Monster Energy NASCAR Cup Series win of the season.

Busch appeared headed to the win but lapped traffic allowed Larson to close on the No. 18’s rear bumper on the final lap.

Larson nudged Busch to take the lead and Busch returned the favor and spun Larson, hitting the wall in the process but had enough momentum to claim the win in Sunday.

"When he got into us, I got into the wall and killed my right-side and it was on after that. It was who can get back to the checkered flag first. This (car) was horrible today but we made the most of it. We adjusted the entire race to be where we need to be at the end.

"We got some clean air finally - my pit crew did a great job helping me there to get this race car out front."

The win is Busch’s fifth of the season and 48th of his career.

Following pit stops during the break between Stages 2 and 3, Harvick was the first off pit road and continued to hold the lead when Stage 3 went green on Lap 168. He was followed by Kurt Busch and Truex.

Busch quickly powered past Harvick on the restart with Larson moving into second.

On Lap 171, Larson got around Busch to take the lead for the first time in the race.

Two laps later, Harvick moved back up into second and began working on Larson for the lead.

Harvick reclaimed the lead on Lap 176.

Hamlin spun off Turn 2 on Lap 177 to bring out a caution. All of the lead-lap cars elected to pit and Logano came off pit road first thanks to a two-tire pit stop. Keselowski and Aric Almirola stayed out.

Daniel Suarez was penalized for speeding on pit road during the stops.

On the restart on Lap 181, it was Keselowski, Almirola, Logano, Harvick and Larson.

On Lap 185, Harvick moved up into the second position with Logano dropping to third.

On the next lap, Harvick got around Keselowski – who had stayed out under the previous caution – to retake the lead.

With 70 laps remaining in the race, Harvick moved out to a more than three second lead over Kyle Busch as a severe thunderstorm watch was issued for the area around the speedway.

Corey LaJoie hit the wall on Lap 208 to bring out another caution. All of the lead-lap cars elected to pit for tires and fuel. Paul Menard and Trevor Bayne were both penalized for speeding on pit road.

Kyle Busch was first off pit road and took over the lead on the restart on Lap 212. He was followed by Harvick, Larson, Truex and Jones.

On Lap 220, Almirola was forced to pit for the second time in the race with a loose wheel. He was running eighth at the time.

With 45 laps remaining in the race, Kyle Busch maintained a small lead over Harvick followed by Truex.

With 30 to go, Harvick trailed Kyle Busch by about a second and was having difficulty trying to close the gap. Larson moved into the third position with 25 laps remaining.

Larson moved into the second position with 19 laps left.

With 10 laps remaining, Larson had closed to within half a second of Kyle Busch with Harvick far back in third.

With seven laps left, Larson appeared to brush the wall, which slowed his momentum.

Kyle Busch to fans: "I don't know what you all are whining about"