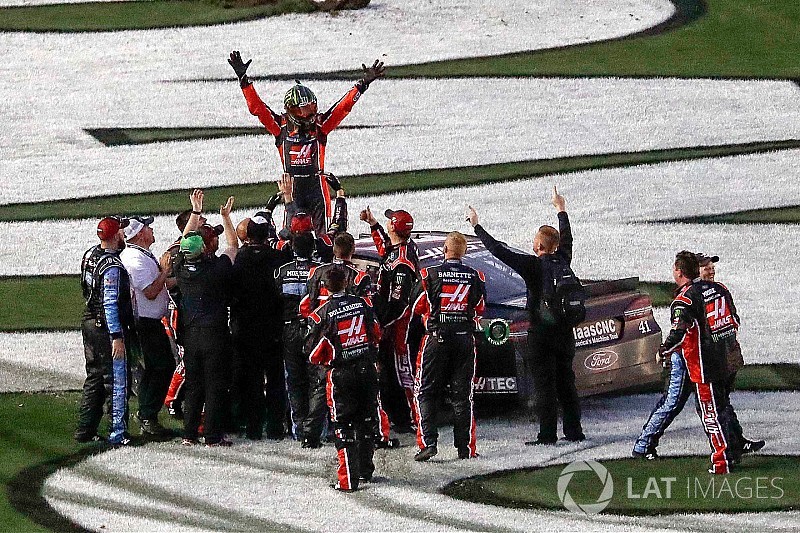 For once, Kurt Busch wasn’t just the bridesmaid in the Daytona 500.

The driver of the No. 41 Stewart-Haas Racing Ford led just one lap en route to his 29th career win. He passed Kyle Larson for the win on the backstretch when Larson ran out of fuel.

The victory was the first for Stewart-Haas Racing after changing manufacturers to Ford Performance. “To look at Gene Haas and see him smile, it makes it all worth it,” said Tony Stewart. A crazy race for sure, it was crazy to watch it from the pit box. If I knew this is what it took to win the Daytona 500, I would have retired a long time ago."

“There is nothing predictable about this race anymore and the more years that have gone by that I didn’t win I kept trying to go back to patterns that I had seen in the past,” Busch said.

"My mirror fell off with 30 laps to go and I couldn’t even see out the back. And I thought that was an omen. Throw caution to the wind. The more unpredictability that keeps unfolding at the Daytona 500, I predicted it. It just got crazy and wild and I am so proud of all the drivers at the end. We put on a show for a full fuel run and nobody took each other out and it was one of the smartest chess games I have seen out there. All the hard work that Ford and SHR put into this -- this Ford Fusion is in Daytona’s victory lane.”

The race was slowed by eight cautions. There were 15 cars remaining on the lead lap at the checkers. Busch assumed the point lead with a 12-point advantage over Blaney.

Multiple wrecks continued to eliminate some of the usual suspects. Jimmie Johnson, Brad Keselowski, Jamie McMurray were all sidelined during the third stage which featured four cautions once the segment began on Lap 125.

Two laps into the final segment of the Daytona 500, a multi-car wreck occurred between Turns 3 and 4 after McMurray bumped Johnson out of line and Trevor Bayne came up and clipped the No. 48 Chevy.

Nearly half the field was collected in the wreck including Kevin Harvick, who had led 50 laps of the first 128 laps, Danica Patrick, Clint Bowyer, Joey Logano, Keselowski, Denny Hamlin and Kurt Busch. Harvick, Hamlin and Busch continued on when the race returned to green on Lap 133.

Kasey Kahne took the lead on Lap 136, but the race was slowed again on Lap 137 when Trevor Bayne, Elliott Sadler, Jeffrey Earnhardt and Ricky Stenhouse Jr. tangled coming off of Turn 4 as Ryan Blaney slowed. Caution 7 involved 12 cars. Jamie McMurray slowed as Elliott dropped from the outside lane to the middle and was punted by Brendan Gaughan. The race returned to green just long enough for Joey Gase to slide into Elliott on Lap 149. Gase spun and took Gaughan with him.

Cole Whitt led the field to green once the race returned to green on Lap 153. But his time at the point was short-lived as Aric Almirola

Elliott was shuffled out in Turn 3 on Lap 197 as Martin Truex Jr. moved into the lead. With Truex in control, Logano radioed he was out of fuel. Kyle Larson pulled to the lead coming to the white flag, but ran out of gas on the back stretch with Busch taking the lead .

Cole Whitt led the field to green once the race returned to green on Lap 153. But his time at the point was short-lived as Aric Almirola the No. 72 Ford. Kyle Larson pulled to the front for six laps followed by Joey Logano on Lap 162. But Elliott continued to pursue the No. 22 Ford and made the pass on Lap 175.

Elliott held on for 23 laps and appeared to be setting sail for not only his first career win — but a Daytona 500 victory. However, he was shuffled out in Turn 3 on Lap 197 as Martin Truex Jr. moved into the lead. With Truex in control, Logano radioed he was out of fuel. Kyle Larson pulled to the lead coming to the white flag, but ran out of gas on the back stretch with Busch taking the lead.

Elliott, who was clearly disappointed after running out of fuel and finishing 14th, left without comment.