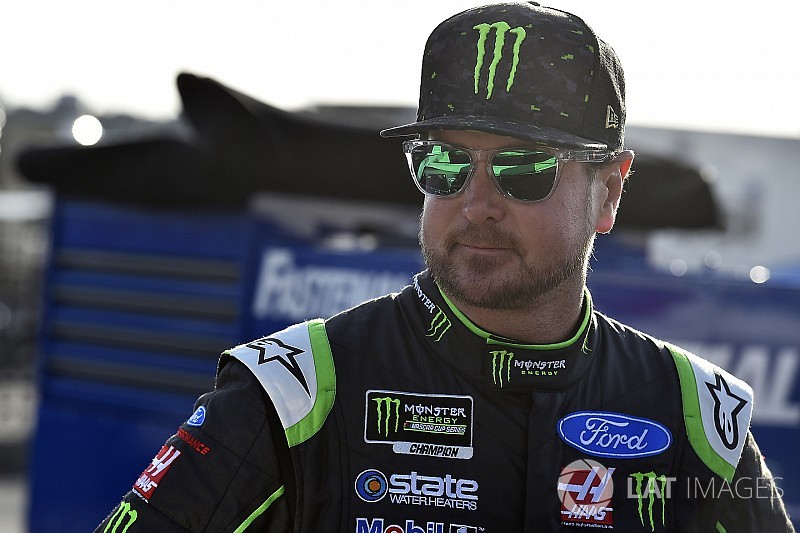 Stewart-Haas Racing’s Kurt Busch says he is not excited about the 2019 NASCAR Cup series schedule because he feels it needs to be “shaken up”.

NASCAR announced its 2019 Cup calendar earlier this month and it proved to be identical to ’18, except for minor Easter date moves to accommodate the holiday.

Ahead of the current season drivers had mixed opinions on NASCAR’s rigid calendar, with SHR’s Kevin Harvick describing the fixed Homestead-Miami finale as “stale.”

Busch says it's difficult to be excited by the 2019 schedule, and that greater collaboration between tracks, the International Speedway Corporation and Speedway Motorsports Inc is needed.

“I just saw them [NASCAR] release the schedule and it's a carbon copy in 2019 as it was in '18,” Busch said on SiriusXM NASCAR radio. “Now, we need to shake up our schedule. There are plenty of racetracks that need to learn how to cooperate with the ISCs of the world, the SMIs of the world.

“People [circuits] need to trade different dates around. I mean, we're going to battle rain in Bristol this weekend and it might be 40 degrees [around four degrees Celsius] again for the third week in a row.

“There's just different things we should do with the schedule. We've got to do more things for our fans, more things for the media, to keep things more interesting and exciting when we're moving and shaking.

“But seeing this schedule for next year, I'm not excited.”

In 2015, NASCAR announced it had signed five-year sanctioning agreements with the 23 tracks that host Cup series races. NASCAR also reached the same agreement with the tracks that host Xfinity and Truck series races. The deals mean the current tracks will host their events through at least the 2020 season. Although the actual race date can change, the deals make it virtually impossible the tracks which make up the schedules can change before the 2021 season.

Busch added that he backed Harvick’s call for the finale to be rotated.

“Harvick's right, there should be a committee that bids on the final race of the year, like a Superbowl committee,” he said.

“We don't need to be at Homestead every year, but Ford's got a nice contract with Homestead and they push hard to sell vehicles in southern Florida.”

The SHR driver also believes that mid-week races would allow NASCAR to try new circuits and build the atmosphere lacking at other circuits.

Busch says the mid-week races could be a showcase for tracks outside the current Cup calendar.

“It [midweek races] would work at a track like Iowa that is starving poor for a NASCAR race,” he said.

“Would it work one time? Yes. Would it work two times? I don't know. But then there's Nashville Speedway, Evergreen Speedway up in Washington State.”

Busch pointed to Eldora Speedway as an example of what midweek races could aspire to, with the dirt track becoming increasingly prominent thanks to Tony Stewart’s investment at the track and the Dirt Derby.

“There's tracks everywhere up the country that struggle to really hold the seating capacity that we really need,” he said.

“But, are we trying to do that or are we trying to put in 40,000 people, pack the house, and create the electric atmosphere that Tony Stewart's done at Eldora Speedway with the trucks racing there.”