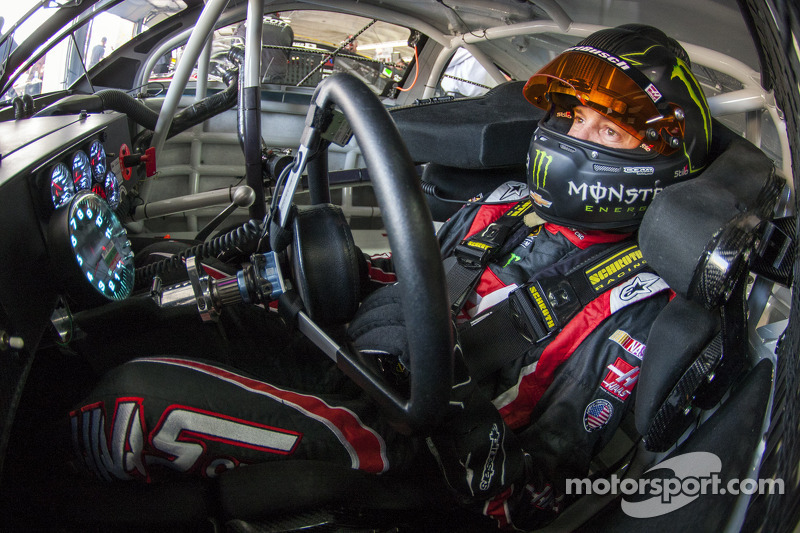 Despite an extremely successful Indianapolis 500, where Busch was the top qualifying and top finishing rookie in his open wheel debut, he completed just 271 laps before his engine expired in the Coca-Cola 600.

"The motor blew,” Busch said. “It acted like it swallowed three cylinders all at once, so it was real slow. It's kind of a shame. It almost symbolizes how tough it's been on the Haas Automation team. We give it our all, and the way we were clawing our way up there and got a lucky break with the caution one time… I thought we were making good gains on the car.”

Busch landed on the front stretch grass at Charlotte Motor Speedway just before 5 p.m. Although the former Sprint Cup champ had to start at the back of the field for missing the drivers’ meeting, he received the lucky dog on Lap 149 and raced into the top 10 by Lap 212.

"The car is the best it's been," Busch said before entering the pits. "I wouldn't change anything."

Two laps later, the No. 41 Haas Chevy made contact with Ricky Stenhouse Jr., which damaged the car. First came the tire smoke, then the team diagnosed a broken left rear shock – which NASCAR would not allow the team to change on pit road.

"It feels like a pogo stick,” Busch said during the fifth caution on Lap 236. “Like there's no shock.”

While Busch nursed his car around the track with the damage shock, he felt the first indications that his engine was souring.

Busch was running 17th just before his engine expired. Inevitably, he was scored 40th.

"It was really a lot of fun,” Busch said. “A lot of preparation, a lot of hard work and a lot of team involvement on the Andretti (Autosport) side and the Stewart-Haas side. It was a dream come true to run at Indy and post a really good finish there. I can't let what happened down here dampen the mood. I'm still really in awe of how well we ran at Indy. Those Andretti guys gave me a good car to do it with.

“Tonight, we were clawing our way up. We got a lucky break with one of the yellows. It was nice to run in the packs and side-by-side and feel that NASCAR on the same day as an IndyCar. The motor just expired. It's a tough break. All in all, I'm very satisfied. I gave it my all. I trained very hard. I had a lot of people helping out. It takes a team if you're going to do 1,100 miles. It's not just one individual. We came up just short. It really means a lot."

While it wasn't the finish that Busch was hoping for he felt "good" with the exception of his hands and feet being "a little sore". As elated as Busch was when he landed, he insisted that "Overall, I can stand here with a smile knowing I gave it my all for six months trying to get to this point.”

So would Busch attempt the Double again?

Johnson wins for the seventh time at Charlotte Motor Speedway