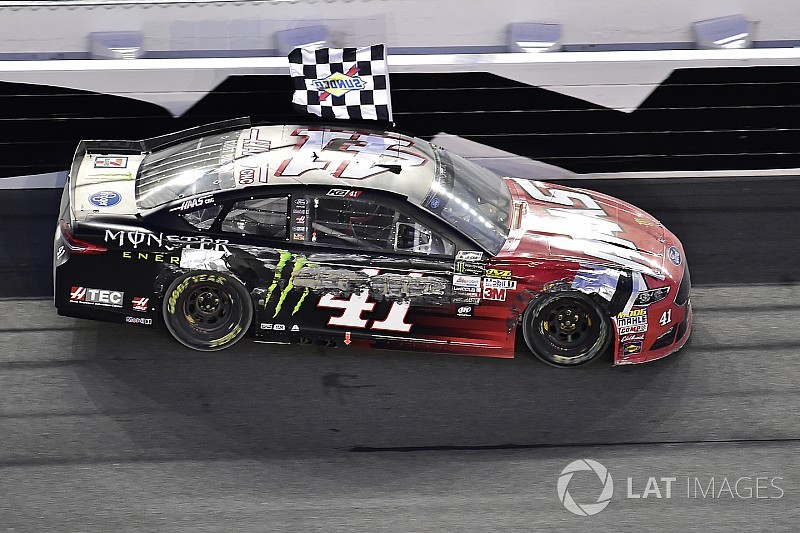 Yes, the 2004 Cup champion has endured his share of adversity over the years. The late Dale Earnhardt flipped off Busch when he drove by him in the 22-year-old’s Daytona debut in 2001. Both Jimmy Spencer and even current team co-owner Tony Stewart have used the 38-year-old as a punching bag over the years.

And it’s unlikely Haas received letters of recommendation on Busch’s behalf from former car owners Jack Roush or Roger Penske. After the Sunday's Daytona 500, even Haas joked that having Busch on the team is “still a gamble”.

But Haas has stood behind his driver since personally recruiting Busch for the 2014 season.

And on Sunday, Busch rewarded Haas with a Daytona 500 win and the first Harley J. Earl trophy for Stewart-Haas Racing.

Busch started Speedweeks by finishing last in the Clash. He completed just 16 laps before he was sidelined last Sunday. Haas was hoping the fortune would turn around for the No. 41 Haas Ford as the week went on.

On Thursday, Busch finished third in the second Can-Am Duel behind SHR teammate Clint Bowyer to guarantee the eighth starting position in the Daytona 500. In the third stage of the race, Busch’s car was damaged in a 17-car wreck on Lap 128. Under the direction of veteran crew chief Tony Gibson, the team managed the crash clock enabling to Busch to remain in contention as many of the contenders were eliminated.

Busch restarted 19th. He avoided mayhem over the next three cautions and rode 14th when the race returned to green for the 47-lap dash to the finish. Busch remained patient even in the closing laps when Gibson told him he was a half-lap short of fuel.

Plenty of talent and just as much luck

As the race leaders — Chase Elliott, Martin Truex Jr. and Kyle Larson — ran out of gas, one after another over the last three laps, the path cleared for Busch.

“There was a lot of luck involved there, but you have to be there to win the prize,” Haas told motorsport.com. “And that’s where Kurt was. I think Kurt being in that third-fourth position really helped because he was able to back off of the throttle, one-two percent, made the difference between the guys up front who had probably used up all of their fuel.”

Since joining SHR four seasons ago, Busch has scored five wins including the Daytona 500. He has qualified for every NASCAR playoff and finished seventh in 2016 — his best result with Haas. Sunday night Busch scored his 29th career Cup win.

Despite Busch’s baggage on and off the track, Haas has not experienced buyer’s remorse.

“He’s won a championship,” Haas said. “He’s done this for many years. I don’t think this was a big risk. We’ve had some unfortunate humps along the way that threw us some curves, but racing is tough. Even winning this race is bittersweet, because we know for the most part you have to have a tremendous amount of luck to win this race.

“We lost three of our other cars because of the crashes early on, and 30 other cars got wrecked pretty bad. So it’s a very difficult race to win. It’s a little bit like winning the lottery. When you win it, you just go, ‘Wow! I’m the luckiest person in the world.’”

Analysis: Daytona 500 victory "makes it all worth it" for Tony Gibson