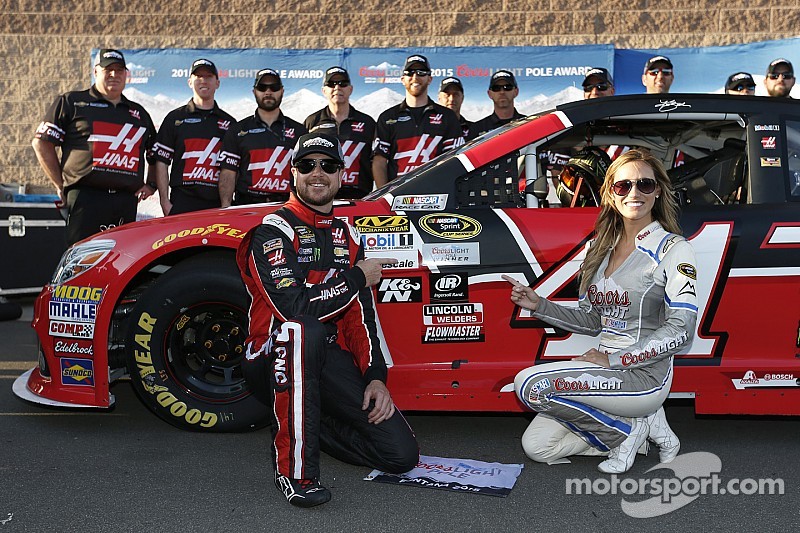 Kurt Busch has returned to NASCAR with a revitalized desire to perform.

Kurt Busch's No. 41 Stewart-Haas Racing Chevrolet NASCAR Sprint Cup Series entry was fast all day in a Friday that culminated in a 185.142 mph/38.889 second lap in the third and final round of qualifying to claim pole for the Auto Club 400, scheduled for Sunday.

"Thank you Gene for believing in me, said Busch. "It's incredible to do it in (SHR co-owner) Gene Haas' backyard. That's probably what got us on the pole today -- all that love from Haas Automation."

The pole is Busch's fourth in Fontana, breaking a tie previously held with Denny Hamlin for most among active drivers at the track. Hamlin will start just outside the top-five in sixth.

Busch began his impressive day quickest in the opening practice, turning in a lap time 0.3 seconds faster than second-place runner, Hamlin. When qualifying rolled around, Busch was second to Matt Kenseth in round one and then fastest in both rounds that followed.

"I felt confident in the car's ability to have that speed," Busch added.

Harvick not far behind his teammate

Stewart-Haas Racing shut all others out of the front row, with Kevin Harvick posting the second-fastest timem in the final round of qualifying to continue his quest of a third-straight win and an eighth-straight top-two finish from the front row, alongside his SHR teammate.

"It's definitely not going to hurt anything," Harvick said of his starting spot. "Hopefully, we can keep it up this week."

Other drivers advancing to the final round and claiming spots sixth through 12th on the starting grid include Hamlin, Jeff Gordon, Brad Keselowski, Ryan Newman, Clint Bowyer, Paul Menard and Ryan Truex.

While three of four Joe Gibbs Racing drivers (Kenseth, Ragan, Hamlin) qualified in the top-five, Roush Fenway Racing wasn't as fortunate. All three RFR drivers -- Ricky Stenhouse Jr., Greg Biffle and Trevor Bayne -- failed to advance past the first round. Stenhouse was the fastest of the bunch in 27th.

"We just have to figure out what we're missing," Biffle said. "The front of our splitter looks to be higher than everyone else."

Edwards misses final round in backup

Carl Edwards, the remaining Joe Gibbs Racing driver, advanced from the first to second rounds, but stalled there with the 15th-fastest lap time in round two.

"It feels good to be that far up in the field with a backup car," Edwards said.

Edwards went to a backup after wrecking in practice earlier in the day.

Perennial front row starter Joey Logano got to the second round but failed to make it to round three. With the 13th-fastest lap in the second rounds, Logano failed to advance to the final round of Sprint Cup Series qualifying since the fall race at Talladega (Ala.) Superspeedway last season. He'll start 13th on Sunday.

Two drivers, Travis Kvapil and Reed Sorenson, made qualifying attempts but failed to make the race.

Edwards ends practice with a bang