Kevin Harvick will race No. 4 Budweiser Chevy at Stewart-Haas 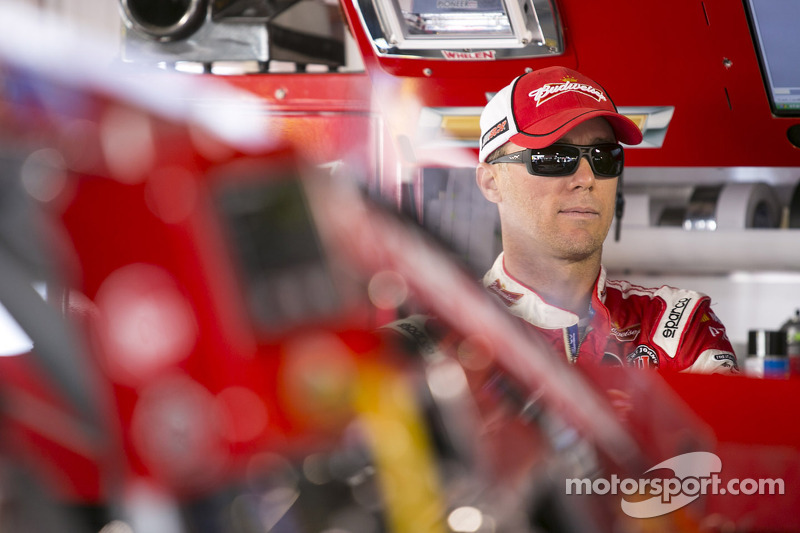 It is now official with the naming of the sponsor and car number: Harvick with Stewart-Haas Racing in 2014. Where will Newman end up is still the question. Montoya crashes during practice at the Magic Mile in Loudon.

LOUDON, N.H.--It’s official. Kevin Harvick is in, Ryan Newman is out, and Budweiser will move with Harvick to Stewart-Haas Racing next year.

Acknowledging that he needed a change of scenery, Harvick confirmed Friday at New Hampshire Motor Speedway that he and long-time sponsor Budweiser both will make the move from Richard Childress Racing to Stewart-Haas Racing next season.

"It’s just like when you show up to the same desk for 12 or 13 years, you are like, ‘Man, I need a new desk,’ or you need to change the pictures on the wall," said Harvick, whose departure from RCR was reported last year, but not the details of his deal with Stewart-Haas.

"It’s just something to where you want a change of pace to do something, and that’s really what it all boiled down to--one of the pieces that it boiled down to."

Of course, there were competitive and personal considerations, too, not the least of which are the chance to work with Stewart as a teammate, the affiliation with Hendrick Motorsports (which supplies engines and chassis to Stewart-Haas), and Harvick’s off-track friendship with his new boss.

As to the choice of the No. 4, Harvick said simply that it’s a good fit with the No. 14 Stewart currently runs in the Cup series.

"The number was something that… I don’t want to say didn’t really matter to me, but it’s something that you want to see consistent with the team and the things that they have going on," Harvick said. "That was a number that was available and seemed like it was a pretty common tie to the 14."

Roughly 20 minutes after Harvick discussed his move, Stewart confirmed that the organization won’t run four cars next season, leaving no room in the organization for Newman, who has been driving for Stewart-Haas since 2009. That was the same year Stewart came to Stewart-Haas as co-owner/driver, after spending the first 10 years of his Cup career at Joe Gibbs Racing.

"Unfortunately, this will be the last year that we have Ryan with us," Stewart said. "That’s probably what has made this a bittersweet day. I’m bringing in another one of my friends to the organization, but also knowing that I’m losing a friend at the end of the year to the organization. The number one thing when Ryan and I spoke is that our friendship will not change.

"This was a business decision that was Gene’s as well as mine, and it was a hard decision… I’ll do everything I can to help Ryan in any way I can moving forward to try to help him in his effort to find another team next year. I’m behind him 100 percent. I believe in him 100 percent. I truly wish we were able to facilitate four teams at this time. We’re just not able to do that."

What's next for Newman?

The truth is that Newman didn’t get the official word from team owner Tony Stewart until Wednesday night.

"I got a phone call from Tony on Wednesday at about 20 minutes till 7," Newman said Friday at New Hampshire Motor Speedway. "We talked basically 20 minutes, and that was it. His phone call was about making the announcement and that I would not be a part of Stewart-Haas Racing in 2014. That was it.

"His stress was the importance of our friendship, and that to me will never change. We’ve only argued over how hard we race. That’s the kinds of friends Tony and I are… That was my first knowledge of what I won’t be doing."

The driver of the No. 39 Chevrolet acknowledged that he’s been a free agent since signing his current one-year deal for 2013, and he’s begun to explore other opportunities. But Newman said that, to this point, he’s been far more focused on competing for a Chase spot this season than trying to find a deal for next year.

"I do not know what my future holds," Newman said. "I have no idea right now. I didn’t have any idea at this time last year. That is something that I guess weighs on my shoulders, and I have a little homework to do. That’s part of racing and part of the situation I’m in.

"I can’t say that I’m happy with how everything unfolded... In the end, I’m happy with the three wins I’ve had so far with Stewart-Haas and the performance and the cars and everything else. There will be a change for me in 2014, and I don’t know what that change is."

In 11 and a half seasons of full-time Cup racing, Newman has 16 victories and 49 poles, third most among active drivers in the latter category. He’s currently 16th in the series standings but only 17 points behind Stewart in 10th place.

The last of his three wins with Stewart-Haas came at Martinsville in April 2012.

"I’ve had a good run, and I look forward to finishing out this year," Newman said.

Two laps into opening Sprint Cup practice at the Magic Mile, Montoya spun and backed his No. 42 Chevrolet SS into the outside wall between Turns 3 and 4. His Earnhardt Ganassi Racing team quickly unloaded a backup car from the transporter.

"I don’t know--other people tested here, and we didn’t," Montoya said when asked what led to the accident. "I went into Turn 3, and all of a sudden it started wheel-hopping, and I got on the brakes, and it kept wheel-hopping, and it was like, ‘Oh, my gosh!’"