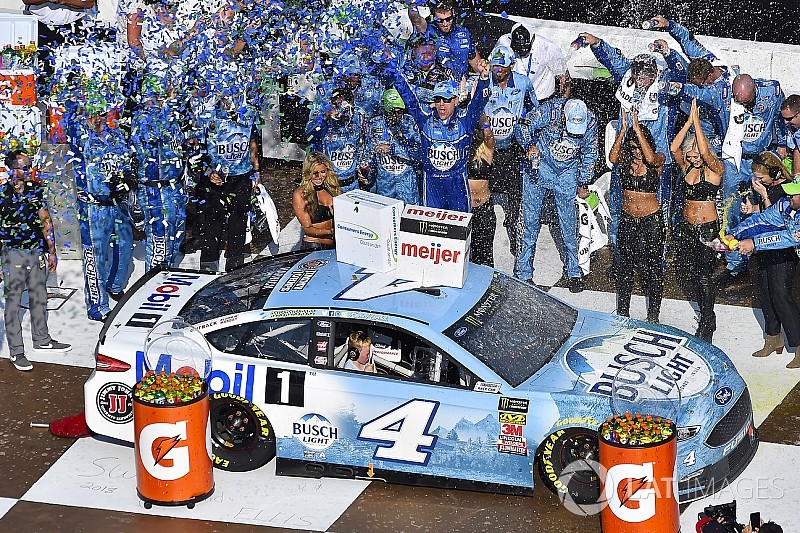 Harvick put in a dominating performance on Sunday, winning both stages and taking the victory in the Consumers Energy 400 at Michigan International Speedway, taking the checkered flag by more than three seconds over Brad Keselowski.

Austin Dillon was running second but had a flat tire with one of 200 laps remaining.

The win is the seventh in the Monster Energy NASCAR Cup Series this season and 44th of his career. It’s also his second win at Michigan and first since the 2010 season. He led 108 laps.

"It's pretty awesome to be a part of NASCAR and to bring your kids to the race track," said Harvick, after his son, Keelan, walked across the track to grab the checkered flag for his father. "To bring your kids to work and experience these kinds of things with them is a dream come true.

Harvick was asked about he and his No. 4 Ford's team philosophy entering Sunday's race.

"The most important thing is winning races right now and getting all the points that you can get to position yourself well to get to Homestead. That's what we've been trying to do all year is win races," he said.

"That was our only goal - we didn't want to learn anything, we don't want to do anything different, we just want to go out and we want to win."

Following the break between Stages 2 and 3, all of the lead-car pits pit for fuel and tires and Harvick was the first off pit road and held the lead as the final stage went green on Lap 127. He was followed by Kyle Busch and Blaney.

Shortly after the restart, Blaney moved into the second position as Kyle Busch dropped to third.

On Lap 133, Ty Dillon wrecked in Turns 3 and 4 after running over a large piece of debris to bring out a caution, which allowed Truex to return to the lead lap. “I hit a piece of lead or something,” Dillon said over his team radio.

The race returned to green after an extensive cleanup on Lap 144 with Harvick still in the lead followed by Blaney and Kyle Busch.

Austin Dillon moved into the second position on the restart as Keselowski moved into third and Blaney dropped to fourth.

With 50 laps remaining in the race, Harvick had a more than one second advantage over Austin Dillon with Keselowski still in third. Blaney and Kyle Busch rounded out the top-five.

On Lap 161, Alex Bowman was the first to stop for fuel and tires as soon as they got within their fuel window to make it to the finish.

On Lap 171, Kyle Busch became one of first running in the top five to make a green-flag pit stop. He was followed by Bowyer and a lap later, Harvick and Keselowski.

Once the cycle of stops were completed with 11 laps left in the race, Harvick held a more than two second lead over Austin Dillon followed by Keselowski, Kyle Busch and Blaney.

With 10 laps remaining, Harvick was complaining the engine in his No. 4 Ford was “running hot.”

Harvick wins Stage 2 at Michigan; Truex runs out of fuel