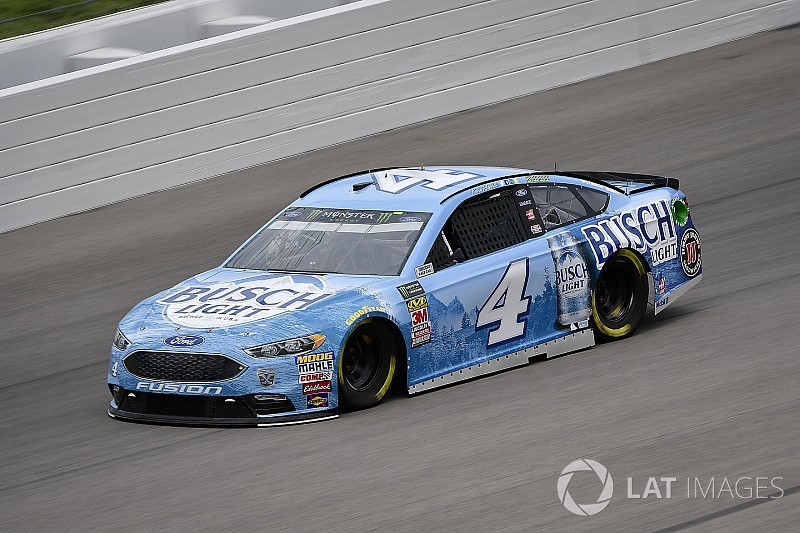 Kevin Harvick shows no signs of slowing down anytime soon.

Harvick blistered the field in the final round of Friday’s knockout qualifying and his average lap speed of 188.811 mph easily beat Ryan Blaney to claim the pole for Saturday night’s KC Masterpiece 400 at Kansas Speedway.

The pole is Harvick’s fourth at Kansas – the most of any driver, his second of the season and 23rd of his Monster Energy NASCAR Cup Series career. He is also fresh off his fourth Cup series win of the season, last week at Dover, Del.

“Obviously, it’s a big advantage to get that first pit stall and any advantage we can get, we’ll take. It’s just a fun streak with the way the cars are running right now.”

Rounding out the Top 12 are Denny Hamlin, Martin Truex Jr., Kurt Busch, Joey Logano, Chris Buescher, Paul Menard and Erik Jones. Buescher’s No. 37 is the only Chevrolet to start in the Top 12.

“The guys are performing at a high level,” Harvick said. “It’s fun to be a part of SHR right now.”

Also advancing to the final round were Kurt Busch, Jones, Truex, Keselowski, Menard, Buescher and Hamlin.

“The car was OK. I definitely think we have more speed than that,” Suarez said. “The race track gained a lot of grip and a lot of speed.”

Two minutes into the second round, Kyle Larson spun off Turn 4 and t appeared he may have just nicked the wall.

“I got tight in the center of (Turns) 1 and 2 and chattered the front. It got me up into the marbles, window brace is broken,” Larson said over his team radio.

NASCAR is allowing Larson to change the tires on his No. 42 Chevrolet but he will have to start the race from the rear of the field for the second consecutive race.

Jimmie Johnson was one of the cars that was about to start its qualifying run the track went red for Larson’s spin. He elected not to continue in the session and the team rested on its Round 1 speed.

Jamie McMurray did not make an attempt in Round after his team couldn’t get his car fired.

“We tried really hard to get it to start and it wouldn’t fire over,” he said.

Blaney went out early in the first 15-minute session and set a blistering pace, posting an average lap speed of 189.043 mph – a speed that stood up the entire session.

Among those who failed to advance to Round 2 were Ty Dillon, Austin Dillon and Ross Chastain.

“We’ll keep working hard to make these cars better and see what we can do tomorrow night,” Austin Dillon said.

When the first round went green there were still several drivers whose cars had yet to clear inspection, including Johnson, Kyle Busch, Matt Kenseth, Clint Bowyer, Suarez, Hamlin, McMurray, Kasey Kahne and Matt DiBenedetto.

Six drivers – Bowyer, Kenseth, DiBenedetto, Timmy Hill, Michael McDowell and Kahne – failed to make it on the track to make a qualifying attempt and will all line up in the rear of the field based on car owner points.

“I don’t know. There’s a pretty bad taste in my mouth right now. It’s hard not to go off. It’s frustrating. The body was off, they make some adjustments and then the chassis is off. It’s just super-frustrating.

“We were fifth-quick in practice. Everybody has a job to do, NASCAR has a job to do. It’s hard, it’s difficult to regulate and make sure everybody is on a level playing field but I don’t think this is the answer, either.”

Matt Kenseth: "I don't feel like I have anything to prove"

Ryan Blaney: Penske "on the brink" of matching SHR