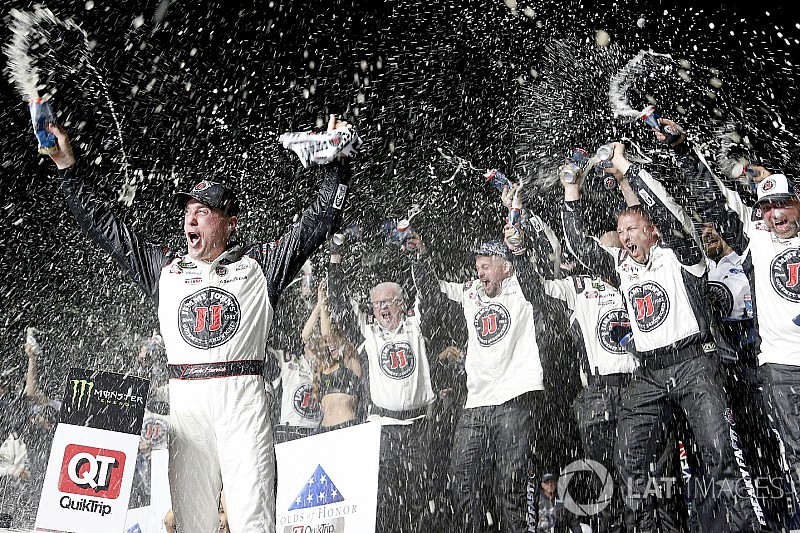 After 17 years, the Closer finally sealed the deal again at Atlanta Motor Speedway on Sunday.

For Harvick, it was the first time he won at 1.54-mile track since his emotional victory in 2001, three races after stepping up and into the No. 3 Chevrolet vacated by the late Dale Earnhardt. And it was well worth the wait.

"I'm just so proud of everybody on our team," said an elated Harvick. "That was the first win (March 2001) in my career and to be able to pay tribute to Dale was pretty cool. I've waited a long time to do that. We've had so many days where I thought we could do that here.

"For five years this car as been so fast at this particular race track, and a lot of other ones. I love racing here and it's good to be back in this Victory Lane. Finally - it took a while!"

Harvick said he and his team enjoyed playing the role as "the car to beat" on Sunday.

"It was great getting in this race car and knowing everybody knew they had to beat our car. I'm just really, really happy with everything that we've done at Stewart-Haas Racing over the last five years. It's a great start to get ourselves in the playoffs and do everything that we need to do. We overcame a lot of things today, had a late-race restart that we drove off and won the race with.

"There were so many demons that seemed to be upon us here for a long time."

Harvick proceeded to do a burnout on the frontstretch then took a victory lap in front of the grandstand and held up three fingers to the fans.

Kurt Busch’s crew gave him the lead out of the pits on Lap 173. The No. 41 Monster Energy Ford led the field to the start of Stage 3 on Lap 178 followed by Logano, Keselowski, Harvick, Kyle Busch, Hamlin, Larson, Bowyer, Blaney and Suarez. Kyle Busch jumped to third on the restart but dropped to fourth behind Logano and Keselowski. Alex Bowman had an issue with a right rear tire and was forced to pit.

Harvick passed Kyle Busch for fourth on Lap 182 and took third from Logano on the next lap. Hamlin ran sixth followed by Bowyer, Larson, Blaney and Elliott.

Keselowski catched Kurt Busch in Turn 2 on Lap 196 but can’t make the pass. Busch goes high through Turn 4 on Lap 199 and Keselowski cruised by on the bottom. Harvick follows on the next circuit for second. Busch drops to third followed by Kyle Busch, Bowyer, Hamlin, Logano, Larson, Suarez, Truex, Blaney, Elliott, Stenhouse, Almirola and Jones.

Kyle Busch ran high through Turns 3 and 4 and passed his brother for third on Lap 208. Keselowski relinquished the lead on Lap 214. Kyle Busch held the point for one lap before pitting and turned the lead over to Hamlin.

Hamlin and Logano finally pit on Lap 226 and Harvick inherited the lead followed by Keselowski, Kyle Busch, Kurt Busch, Suarez, Bowyer, Larson, Truex, Elliott and Blaney. Stenhouse, Almirola and Jones remained on the lead lap. Hamlin cycled out to 14th, one lap down. By Lap 230, Hamlin returned to the lead lap and Logano ran 15th, one lap down.

Keselowski pitted from second on Lap 252. Harvick came on the next circuit turning the lead over to Hamlin. Logano ran second followed by Harvick, Elliott, Keselowski, Kyle Busch, Bowyer, Larson, Busch and Suarez on Lap 260.

Elliott pitted from fifth on Lap 265 as Harvick took the lead from Hamlin, who had yet to pit. Keselowski passed Logano on Lap 267 for third. Kyle Busch ran fifth followed by Bowyer, Larson, Kurt Busch, Suarez and Truex.

Harvick held a four-second lead over Hamlin with 55 laps remaining. Hamlin and Logano had yet to pit. Logano held onto fourth behind Keselowski. Ten cars remained on the lead lap. Hamlin pitted on Lap 274, Logano followed on the next circuit.

WIth 50 laps remaining, Harvick’s advantage was 10-seconds over Keselowski with eight cars on the lead lap. Harvick lapped his teammate Kurt Busch on Lap 281.

Larson pit from fifth with 40 laps remaining, Harvick, Keselowski, Kyle Busch and Suarez came in for service on Lap 288. Hamlin took the lead but Harvick cycled out to second with fresh tires. He passed Hamlin for the lead through on the backstretch on Lap 290 with 35 circuits remaining. Logano was third but Keselowski passed him on Lap 292. Elliott ran fifth followed by Bowyer, Larson and Kyle Busch.

Trevor Bayne’s race went up in smoke on Lap 296 on the backstretch as his engine failed coming out of Turn 2. Bubba Wallace was blinded by the smoke and ran into the back of Ricky Stenhouse Jr. Harvick’s lead was three-seconds over Hamlin.

Clint Bowyer on third-place at Atlanta: "That's what it takes"