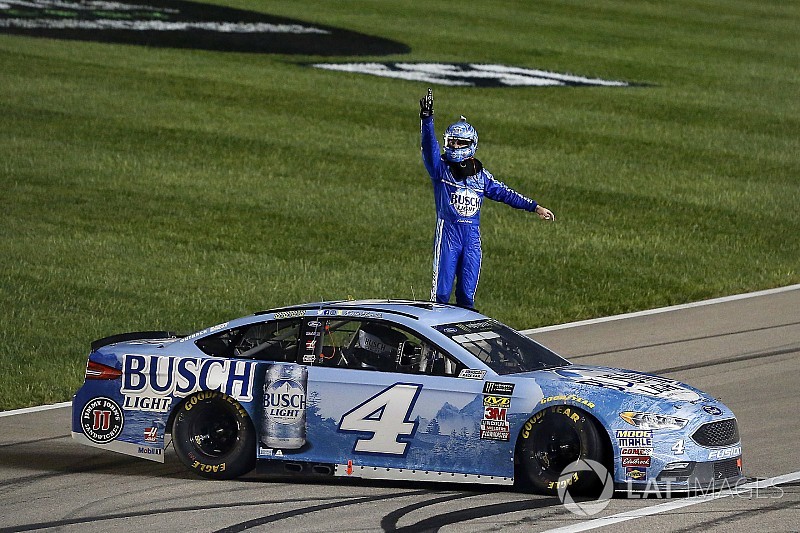 The amount of success and how quickly it has come leaves Kevin Harvick feeling this season has become “like a game.”

But it’s a game Harvick prefers to play on offense.

Harvick picked up his Monster Energy NASCAR Cup Series-leading fifth victory of the season Saturday night at Kansas Speedway. That’s the most wins a driver has accumulated in the first 12 races since Jeff Gordon in 1997.

“We know that we’re riding a momentum wave that is hard to come by, and you need to capitalize on it as many times as you can because it may never come again. I’ve never had it in my career, and I’ve been doing this for 18 years.

“These moments are not something that happen very often, and now you need to go put every detail into a car like you’re racing for a championship race at Homestead every week because it just has that special feel to it.”

He said this year reminds him of his 2014 championship season, except with a lot less parts failures and new team stumbles.

“We were all new (at Stewart-Haas Racing). We made a lot of mistakes and just didn’t really know how to deal with it like we do now,” he said.

Harvick appeared to have a strong car at Kansas but Chevrolet driver Kyle Larson actually led the most laps and Toyota’s Martin Truex Jr. found himself in the lead via pit strategy following a restart with 15 of 267 laps remaining.

Harvick lined up eighth on that same restart, but he was the first car that had taken four new tires on his previous stop. The top six, including Truex, had stayed out and rookie William Byron lined up seventh with only two tires.

While Harvick’s crew chief, Rodney Childers, was not happy with their loss of track position, the situation was just fine for Harvick.

He moved into second behind Truex with seven laps remaining and made the pass for the lead with one lap to go.

“I’d always rather have four tires and have a chance to go forward. I hate staying out there and riding around on old tires and just hoping that it all works out for you,” Harvick said. “You know, four tires won us a championship, so (Saturday night) it won us a race.

“Those are the moments that you want to be on offense and you want to be in control, and sometimes it looks worse than it actually is. I know that's what (Childers) was mad about was coming out eighth and thinking that you don’t have a chance.

“I really feel like even when we were eighth (on the restart), I felt like on sticker tires, I felt we would have had a bigger advantage.”

NASCAR Mailbag: Getting more manufacturers on the grid