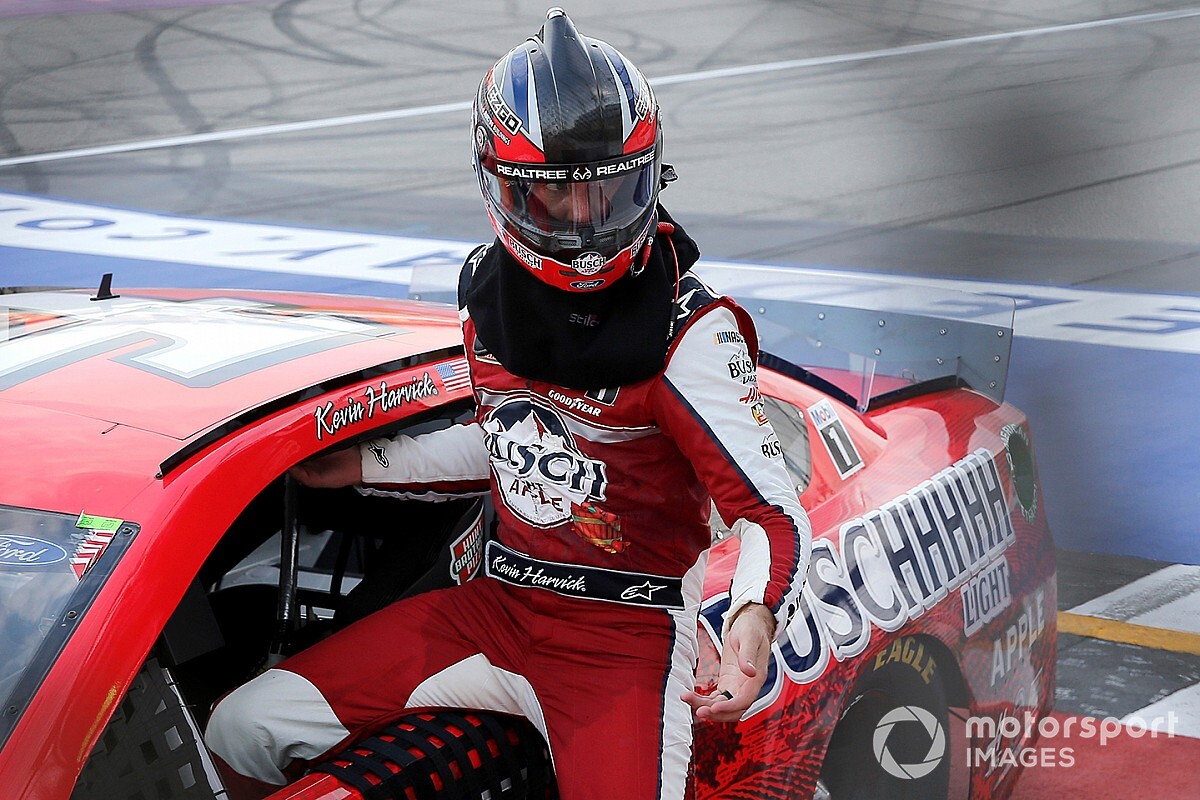 Kevin Harvick held off furious charge from Brad Keselowski in overtime to win the opening race of the Michigan International Speedway doubleheader.

Harvick led on the overtime restart and Keselowski chose the inside lane and line up alongside. The two raced side-by-side for half a lap before Harvick finally cleared the lead and hung for the victory.

“Yeah boys – thank you. What a car!” Harvick said over his team radio has he took the checkered flag.

The win is the fifth this season for Harvick in the NASCAR Cup Series, tying him with Denny Hamlin for most in the series. It was also his 54th career victory, tying him for 11th all-time with Hall of Famer Lee Petty.

“The restarts were obviously a handful but our (car) was really fast today and we held on for the long run and would really go on the short run and did everything we needed it to do," Harvick said. "We are a week-to-week team. We talked about this years ago. We want to go to the track and worry about one week at a time. We want to be competitive and win as many races as we can and see where it falls in the end. These guys are awesome and when we come to Michigan to ride a car like that is unbelievable.

"I have been very fortunate to work with some good teams and have some good race cars. When you start talking about names like Lee Petty and Rusty Wallace and Junior Johnson and all the names that are around us on that list is just an honor to be around them. I know that comes with a lot of responsibilities for our sport and I ask myself all the time if I have done enough or am doing enough to help make this sport go forward. It is an honor to be around those names.”

Asked about his close-call with Kyle Busch late in the race, Harvick said: "I didn’t know if I hit him or not but I saw the video and didn’t touch him. I must have packed a bunch of air on his left rear. I knew I needed to be right there. You have to take the chance when you have it and I needed that side draft down the front straightaway. I got within like an inch it looked like on the video. I didn’t know if I had just barely touched him but in the video I definitely didn’t touch him.”

Following the break between Stages 2 and 3, the lead-lap cars all pit with Harvick the first off pit road.

On the restart on Lap 92, Harvick was followed by Hamlin, Erik Jones, Keselowski, Elliott and Blaney.

Hamlin got a strong push from Jones and reclaimed the lead briefly on the restart before Harvick was able to get back around him for the top spot.

John Hunter Nemechek spun off Turn 4 on Lap 94 to bring out a caution. On the restart on Lap 99, Harvick was followed by Hamlin, Elliott and Keselowski.

Nemechek went around again on Lap 106 to cause another caution. All lead-lap cars decided to pit with Kyle Busch the first off pit road by taking fuel only.

On the restart on Lap 111, Kyle Busch was followed by Harvick, Austin Dillon and Jones.

Kyle Busch cleared for the lead early but Harvick was able to get back around him on Lap 113 to reclaim the top spot.

With 30 laps to go in the race, Harvick had built up a 1.4-second lead over Kyle Busch with Truex third, Jones fourth and Elliott had moved up to fifth.

Once again, Nemechek hit the wall off Turn 3 which brought out another caution for debris on the track. A few cars elected to pit but Harvick remained on the track and in the lead.

During the caution, a jet dryer dumped some fuel on the track off Turn 2 and the backstretch which required an extended cleanup.

When the race returned to green on Lap 139, Harvick was followed by Elliott and Kyle Busch.

Elliott grabbed the lead with a push from Keselowski on the restart.

Ryan Preece hit the wall off Turn 2 on Lap 144 to bring out the seventh caution of the race. On the restart on Lap 148, Elliott led the way followed by Kyle Busch and Harvick.

Kyle Busch initially cleared for the lead only to see Harvick come up to him quickly. The two did not make contact, but it sent Busch into the wall and Harvick emerged with the lead.

Just after that, Cole Custer wrecked to bring out another caution.

NASCAR displayed the red flag to clean fluid that was dropped in Turn 4. The race returned to yellow after a 10-minute delay. On the restart with three laps remaining in the race, Harvick led the way followed by Hamlin, Wallace and Elliott.

With two laps remaining, Austin Dillon got hit by Christopher Bell, went up and hit the Turn 4 wall and also collected Ryan Newman to being out the caution and send the race into overtime. Harvick led the way on the restart.

Harvick continued his dominance at Michigan, easily holding off Blaney to win Stage 2 and complete a sweep of the stages on Saturday.

Hamlin was third, Jones fourth and Keselowski rounded out the top-five.

Following the break between Stages 1 and 2, all lead-lap cars elected to pit with Hamlin the first off pit road.

On the restart on Lap 48, Hamlin was followed by Keselowski, Harvick and Jones.

Blaney powered to the lead on Lap 50 as Harvick moved into second and Hamlin began dropping back through the field.

With 30 laps remaining in the second stage, Blaney maintained a small but stead lead over Harvick with Jones having moved up to third.

On Lap 58, Jones moved into second and began setting his sights on the leader.

With nine laps remaining in the stage, Harvick went to the inside of Blaney and reclaimed the race lead off Turn 2.

Harvick had built more than a half-second lead on Blaney with two laps to go in the stage. Hamlin remained third, more than 4 seconds behind.

Logano held the early lead from pole position, but complained about a possible vibration. He remained in control as the field raced towards a Lap 15 competition caution, despite challenges from Hamlin.

Blaney opted to pit just before the yellow in a move to gain track position. The leaders stayed out, but Keselowski led a fairly large contingent of drivers down pit road during the caution period.

On the ensuing restart, Truex fell off the pace with a flat tire and needed to make an unscheduled pit stop. He made contact with Tyler Reddick, who needed to pit soon after as well.

Both lost a lap and were unable to get the free pass at the end of the stage.

Harvick was then able to power by both Hamlin and Logano, taking over the race lead on Lap 23. Logano fell through the field after that, nearly getting turned by Kyle Busch as he slid out of Turn 2, ultimately dropping outside the top-10.

Harvick claimed the stage win with Hamlin a few tenths back. They were followed by Blaney, Kurt Busch, Keselowski and Jones.

Four cars – those of Jimmie Johnson, Joey Gase, Newman and Chris Buescher – had to start the race from the rear of the field.

Johnson and Gase’s cars failed inspection twice. NASCAR confiscated the spoilers off the cars of Newman and Buescher and issued the additional penalties.