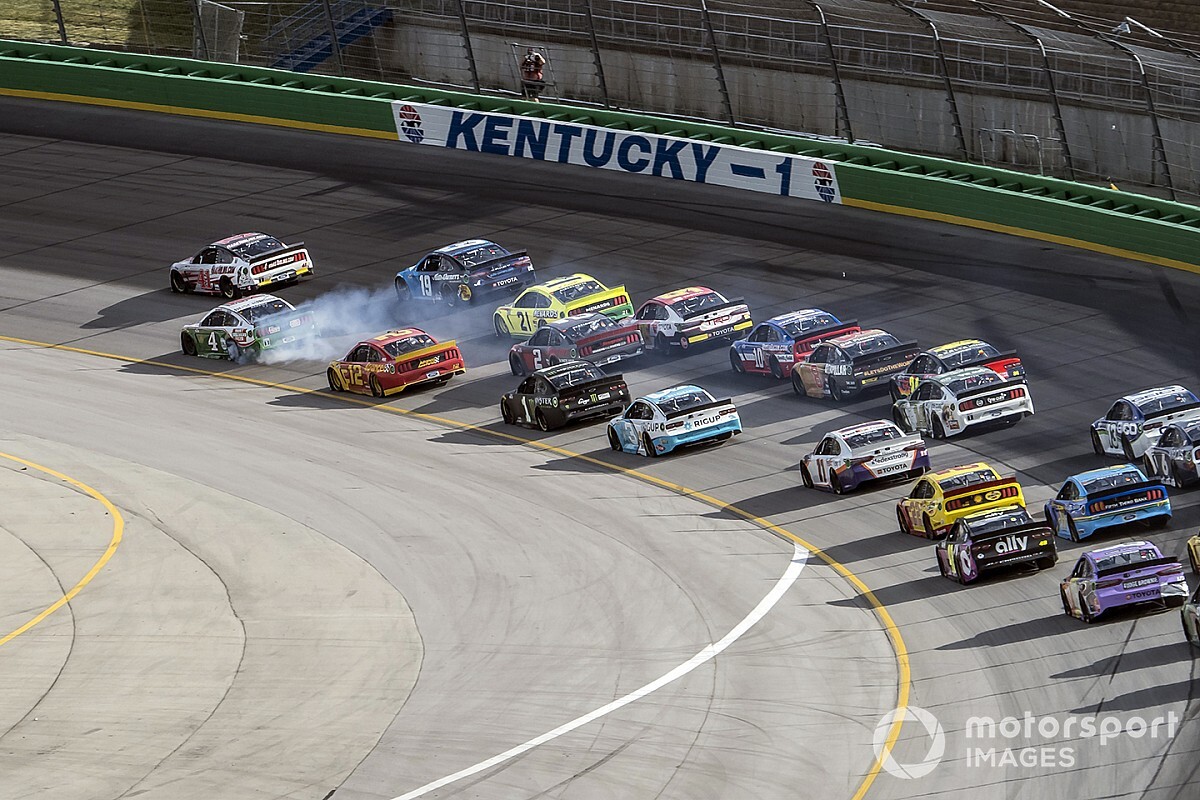 Kevin Harvick went from out of contention to the verge of winning Sunday but run-ins with Martin Truex Jr. and Ryan Blaney in the final two laps left him short of victory.

Harvick truly had an up-and-down day at Kentucky Speedway, one of two race courses on the current NASCAR Cup Series schedule on which he’s never won.

Midway through Sunday’s race, Harvick fell as low as 24th in the field as his No. 4 Ford developed serious handling issues.

Harvick found his way back into contention late in the third stage by remaining on the track as long as possible before making his final green-flag pit stop and a timely caution put him right back into the picture for the win.

A late-race caution left Harvick the leader on the final restart with two of 267 laps remaining. He used a daring three-wide move on the previous restart to grab the lead but this time he wasn’t as fortunate.

Truex got into Harvick on the backstretch while the two battled for the lead which got Harvick quite loose. Then on the frontstretch, Blaney went low and moved back up the track and tagged the left side of Harvick’s No. 4 Ford leaving it with a tire rub.

“Our Ford Mustang was not very good today, but we got a good break with the caution. I had a couple good restarts there and got the car better, but still just not where we needed to be,” Harvick said.

“The restarts worked out in our favor and we were able to get the lead and Martin just misjudged there on the backstretch and got me sideways. I got out of the gas and that just brought everybody into the picture.

“Then we were four-wide on the front straightaway here and (Ryan Blaney) hit the drain and came up and hit the side of the car and then I couldn’t see, so, yeah, it got wild and that’s what you’re supposed to do.”

Truex said he talked to Harvick after the race to explain what happened after the final restart.

“I tried to slide up behind him off of (Turn) 2 there so I didn’t get freight trained,” Truex said. “I clipped his rear enough to turn him sideways.

“I told him obviously that was my bad. He knew it. Kevin and I have raced hard and clean all the time. It was just a little judgment error on my part. Luckily he hung onto it, was able to keep rolling.”

Harvick still managed to finish fourth and his Stewart-Haas Racing teammate, Cole Custer, picked up his first career win after coming away from the four-wide frontstretch move with the lead.

“That’s pretty cool to get your first win,” Harvick said. “As much as I would have loved to win, I’m glad that we kept it in the company.

“Obviously, last week he was a big part of our win (at Indianapolis) and to get to Victory Lane in your rookie year is a big deal. Really happy for (team co-owner) Gene (Haas) and especially for Cole, he works really hard.”

Harvick may not have added to his victory total Sunday, but another Harvick picked up a win. Harvick’s eight-year-old son, Keelan, won his first go-kart race on Saturday in Mooresville, N.C.