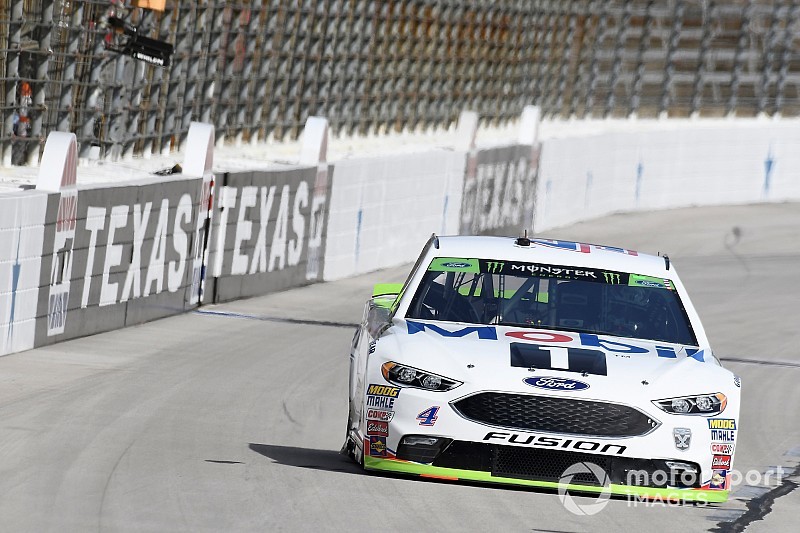 Kevin Harvick made a clean sweep of the stage wins at Texas on Sunday.

Aside from green-flag pit stops, Harvick again dominated the 85-lap stage and cruised to a nearly 6-second lead over Ryan Blaney to claim the Stage 2 win.

Following the break between Stages 1 and 2, Harvick was again first off pit road and remained in the lead when Stage 2 went green on Lap 93. He was followed by Kurt Busch and Jones.

On Lap 97, Jimmie Johnson got loose and spun in Turn 3 as his teammate, William Byron, plowed into the back of him to bring out a caution. Harvick continued to lead the way on the restart on Lap 101.

With less than 60 laps remaining in the second stage, Harvick maintained a small lead over Logano with Kurt Busch running in third.

With 45 laps left in the stage, Jones became the first driver to make a green-flag pit stop, to ensure enough fuel to make it to the end of the stage. Harvick elected to bring his No. 4 Ford down pit road on Lap 133.

On Lap 143, Kyle Busch was forced to pit a second time under green because he thought he had a loose wheel.

Ricky Stenhouse Jr. received a penalty during his stop for an uncontrolled tire and had to make a pass-thru penalty on pit road.

When the green-flag cycle of stops had completed on Lap 160, Harvick returned to the lead, followed by Jimmie Johnson, Blaney, Truex and Keselowski.

With five laps left in the second stage, Harvick held a more than 4-second lead over Blaney, with Truex moving up into third as Johnson made his green-flag stop.

Clint Bowyer was penalized during his green-flag stop for having a crew member over pit wall too soon and he had to make a pass-thru penalty.

Kevin Harvick fends off Blaney in overtime to win at Texas