Dale Earnhardt died 20 years this past February, altering NASCAR forever, but it was less than a month later that another chapter in his legend came to life.

In just his third race as Earnhardt’s replacement in Richard Childress Racing’s No. 3 Chevrolet – rebranded as the No. 29 – Kevin Harvick went toe-to-toe with another NASCAR legend and returned Earnhardt’s team to Victory Lane.

Harvick raced side-by-side with Jeff Gordon exiting Turn 4 and to the checkered flag at Atlanta Motor Speedway on Sunday, March 11, 2001, and the rookie came away with his first Cup Series win by a scant 0.006 seconds.

The scene unfolding on pit road and the frontstretch immediately after the win was a chaotic and emotional one.

While Harvick had run strong in the race, Gordon had led the most laps. Even though Harvick led late, there seemed an air of inevitability, in the press box at least, that Gordon would be able to run down the No. 29.

“I remember how loud the crowd was after I did my burnout and driving around the race track backwards. The rest of it is a little bit confusing as to what you remember, what you don’t remember.”

As it turned out, I was the only Charlotte Observer reporter at Atlanta Motor Speedway that day. My colleague at the time, David Poole, was taking his first race weekend of the season off.

Myself, Poole and others at The Observer had still been working on numerous follow stories since Earnhardt’s death and I unexpectedly found myself having to chronicle the next unpredictable turn. 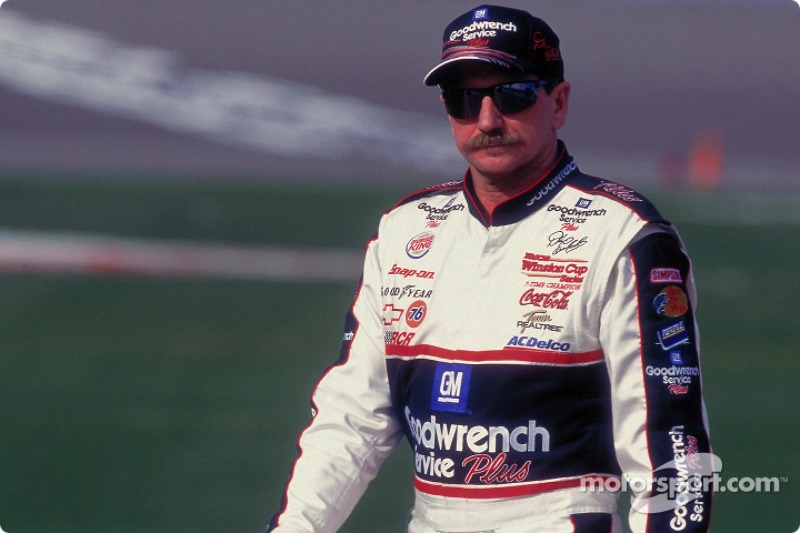 This is how my race lead on Harvick’s win began:

His rookie, Kevin Harvick – called upon just weeks before to replace the late Dale Earnhardt – was side-by-side with Jeff Gordon racing to the finish line in Sunday’s Cracker Barrell 500 at Atlanta Motor Speedway.

Childress, in Harvick’s pit box, watched intently to see if the No. 24 car was going to jump past the No. 29 of Harvick’s on the monitor.

It was a surreal moment and day. 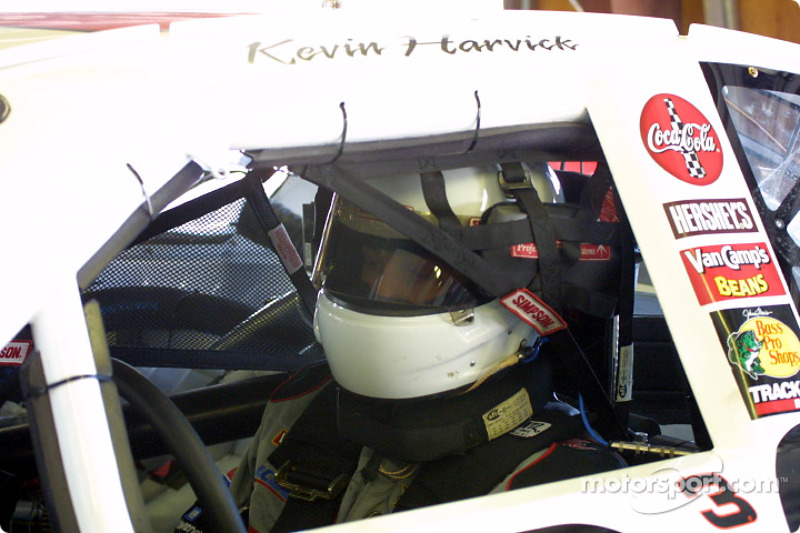 Just weeks before, Earnhardt’s death had stunned NASCAR and sent Harvick’s life into a wild spin. A driver who was planning to run a full schedule in what was then called the Busch Series as well as do a handful of Cup races was suddenly thrust into “double duty” – competing in both series fulltime.

While the date of Earnhardt’s death forever changed NASCAR, it of course also changed Harvick’s.

But I’ve always felt his win at Atlanta is what really jump-started his career. Not just because he showed he could win – Harvick was a talented young driver – 25 at the time – and he was likely headed to a successful Cup career regardless of when it officially started.

What his victory showed, I believe, is that the sport of NASCAR could move on and do so with a new cast of stars. The decisions by Richard Childress and all those at RCR to continue to race felt validated with the victory.

Steve Park’s win in the second race of the season at Rockingham, N.C., was important, too, as he drove for Earnhardt’s Dale Earnhardt Inc. organization. I still remember Gordon donning a black No. 3 hat after winning the pole that weekend.

But Harvick’s victory at Atlanta belonged to RCR, to Earnhardt’s fans, to Harvick’s new ones and to all those who had long been a part of the No. 3 team.

The impression I most remember leaving the track with that day was that everything was going to be OK. 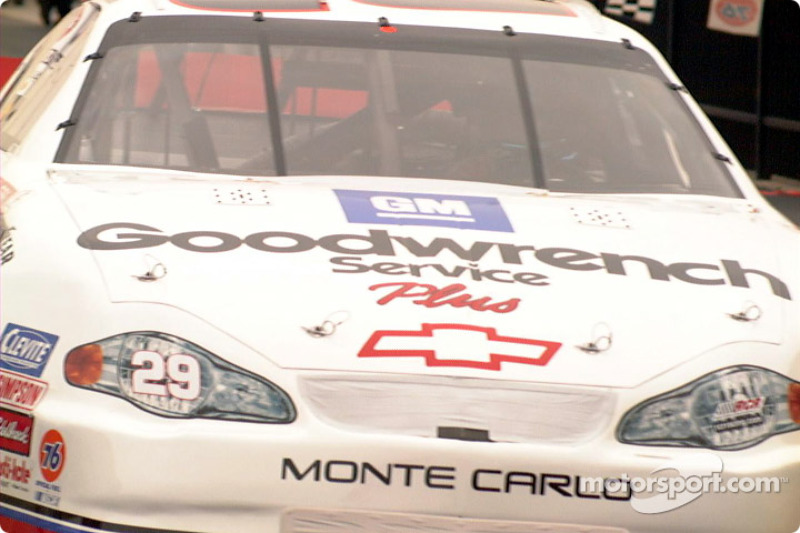 NASCAR was going to make it without one of its biggest stars on the track. The nail-biting racing fans had come to expect could still happen but with new superstars at the helm.

Things would never be the same. But NASCAR would continue.

“Looking back on it now, you realize the importance of getting in the Cup car (at that time). Atlanta was supposed to be my first race with America Online in the No. 30 car, and then we wound up winning my first race at Atlanta in the No. 29 car after Dale’s death,” Harvick said.

Now 20 years later, the remarkable thing about Harvick’s career to me is how much of it has mirrored Earnhardt’s, even as Harvick moved on from RCR in 2014.

Both drivers remained successful well into the prime of their respective racing careers. Both were successful trying their hand at NASCAR team ownership. Both have been willing to speak up on issues to NASCAR when they feel their voice should be heard.

And both have had a son trying to blaze their own successful NASCAR racing career, although at 9-years-old, Keelan Harvick’s racing future remains much in flux.

Harvick’s NASCAR career never got underway how it was planned. But life rarely provides a guide map with precise directions.

But you never know.

While speaking with the media in the press box after the race – a custom long since abandoned – Harvick offered this take on his last-lap race to the finish with Gordon: 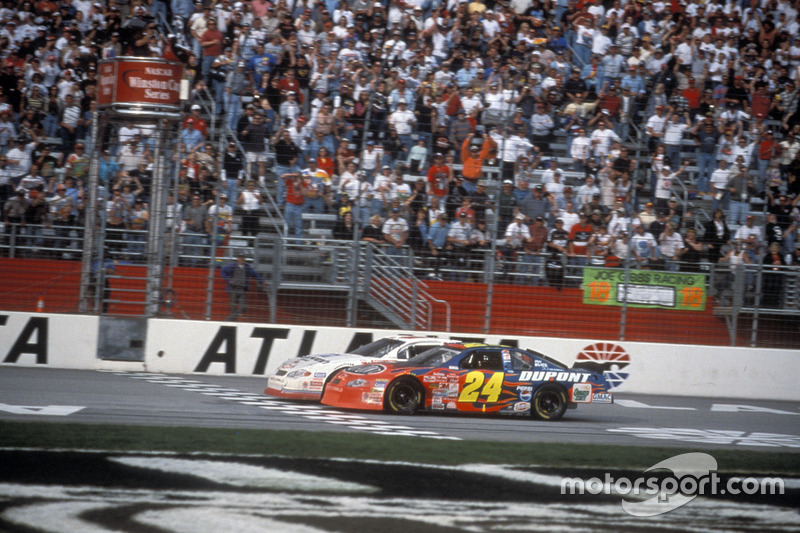 Kevin Harvick takes the checkred flag ahead of Jeff Gordon

“I gave it everything I had. I moved up (the track). I think Dale Earnhardt was in the passenger seat of this car today. Somebody was making me go a lot better than I was.”

Elliott "would have loved" to run Trucks at Bristol Dirt Track