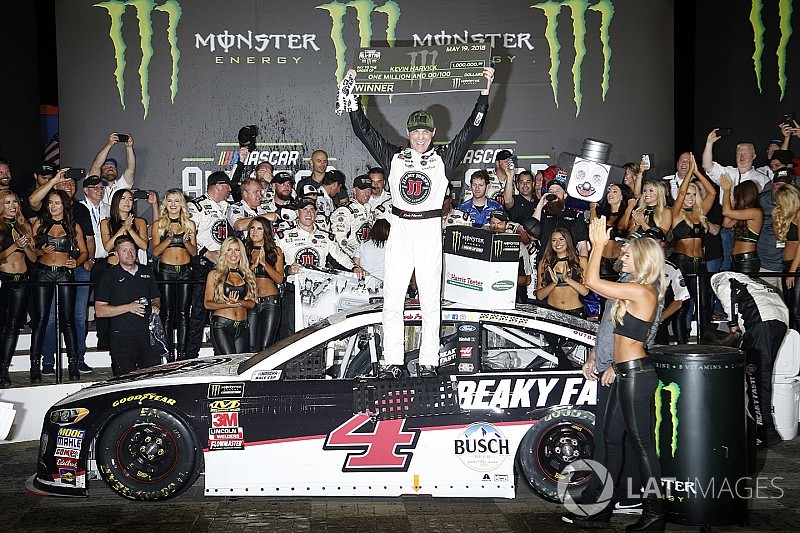 Kevin Harvick now has a million reasons to like NASCAR’s new aero package.

The all-star win adds to what is already a dream season for Harvick, who has already accumulated five Cup series wins this season.

“Thank you, thank you, thank you!” Harvick yelled over his team radio as he took the checkered flag. He then proceeded to do a long burnout as his No. 4 Stewart-Haas Racing teammates climbed the frontstretch fence.

The race was the first in the Cup series to use a new aero package that featured front air ducts, restrictor-plates, a larger rear spoiler and splitter used in the 2014 season.

"We got a little behind on the first pit stop and traffic wasn't our friend," Harvick said in Victory Lane. "I mean these guys built a really, really fast Ford. I have to say thank you to the aero department and the fab shop and all the guys in engineering.

"And special thanks to the Roush-Yates engine department. They put a lot of effort in, they love restrictor-plate racing - and we won!"

Asked if there was any debate on lane choice on the final restart, Harvick said, "Our car was super fast and it would accelerate well. I knew if I could just get to Turn 2, I felt like we would accelerate fast enough on the backstretch.

"On a straight line, this thing was a rocket."

On the start of the final stage, Harvick led the way followed by Suarez, Kyle Larson, Ryan Blaney and Logano.

Blaney moved into third behind Suarez shortly after the restart.

With six laps remaining, Hamlin moved into third behind Harvick and Suarez.

With two laps to go, Logano and Larson made contact off Turn 4, with Logano hitting the wall and Larson spinning through the infield grass. The caution sent the final stage into overtime with Harvick leading the way followed by Suarez, Hamlin, Logano and Jimmie Johnson.

Harvick rocketed past Suarez, going from third to first on the last lap of double overtime to claim the Stage 3 victory.

Following pit stops between Stages 2 and 3, Brad Keselowski took on only two new tires and took over the lead when the 20-lap third stage went green. He was followed by Kyle Busch and Suarez.

With 16 laps left, Truex powered around Keselowski and into the lead.

One lap later, Kasey Kahne got into the wall on the frontstretch to bring out a caution. On the restart on Lap 60, Truex led the way followed by Keselowski, Larson, Kyle Busch and Blaney.

Larson moved into the second position with nine laps left in the stage.

With two laps remaining in the stage, Alex Bowman got into the wall exiting Turn 2 to bring out a caution and send the stage into overtime.

Several lead-lap cars elected to pit, but Larson remained on the track to inherit the lead when overtime began. He was followed by Suarez and Hamlin.

Johnson had to restart from the rear of the field after speeding on pit road.

Kyle Busch had his hands full holding off his teammate Suarez to claim the victory in the 20-lap Stage 2.

Following pit stops between Stages 1 and 2, Kyle Busch was the first driver off pit road and took over the lead when the second stage went green. He was followed by Truex and Johnson.

Harvick dropped to fifth on the restart after his left-front tire got stuck on the fender when his team was trying to get it off.

“Pretty much wide open there … will be a different game in traffic,” Harvick said over his team radio. “Will be pretty fast if we can keep it out front.”

With 10 to go in the second stage, Kyle Busch continued to lead the way with Suarez moving into the second position just ahead of A.J. Allmendinger.

With seven laps left, Allmendinger appeared to hit the wall and he dropped back in the field and then eventually had to pit to change tires.

Larson moved into second place with two laps left in the stage.

While his competitors continued to challenge each other for second place, Harvick got a clear path to a victory in the first 30-lap stage.

Stenhouse got a push from Harvick at the start of the race and bolted quickly into the lead.

On Lap 2, Kurt Busch got into the wall coming off Turn 4 to bring out the first caution. The race returned to green on Lap 6 with Stenhouse leading the way, followed by Harvick and Kenseth.

Harvick powered to the lead shortly after the restart.

With 15 laps remaining in the stage, Harvick continued to hold a lead followed by Truex and Logano.

With 10 to go, Harvick held a small lead over Truex with Kyle Busch close behind in third.

McMurray had to start the race from the rear of the field after his No. 1 Chevrolet made an engine change following the Open.

Daniel Suarez finishes second: "It hurts to be close and not get it"