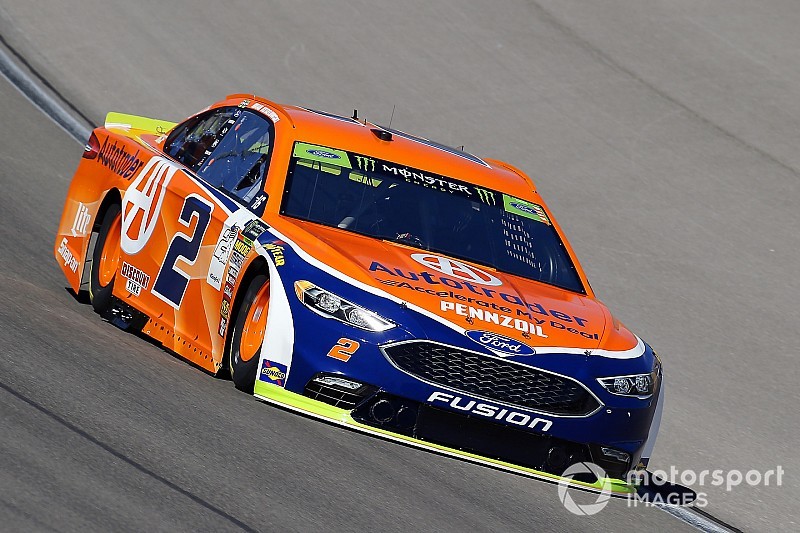 Brad Keselowski held off Kurt Busch in a four-lap dash to win Stage 2 at Las Vegas.

Keselowski has won the last two Monster Energy NASCAR Cup Series races and put himself in good position for a third after two playoff contenders – Kevin Harvick and Erik Jones – were taken out in an accident.

Following the break between Stages 1 and 2, Truex was the first off pit road and remained in the lead when the race returned to green on Lap 88. He was followed by Bowman, Logano, Elliott and Harvick.

Ricky Stenhouse Jr. was penalized by NASCAR for speeding on pit road during his stop.

On Lap 90, Stenhouse slapped the wall hard with the right-side of his No. 17 Ford to bring out a caution. The race returned to green on Lap 94 with Truex still out front, followed by Bowman and Kurt Busch.

On the restart, Harvick got around Bowman to take the second position.

With 60 laps remaining in the second stage, Keselowski moved up to third as Logano ran fourth and Kurt Busch fifth.

On Lap 111, Ty Dillon lost a right-front tire and hit the wall on the frontstretch, which brought out a caution. All of the lead-lap cars elected to pit for fuel and tires and Keselowski was the first off pit road.

When the race returned to green on Lap 116, Keselowski led the way followed by Truex, Logano, Harvick and Kurt Busch. Kyle Busch had to make a second pit stop to fix a loose lug nut and restarted 25th.

On Lap 125, Truex closed alongside Keselowski and was finally able to clear him for the lead in Turn 3.

With 20 laps remaining in the second stage, Truex had moved out to a more than two-second lead over Keselowski, followed by Kurt Busch, Logano and Harvick.

On Lap 148, Harvick appeared to blow a tire and slid up into the wall, where pole-winner and fellow playoff driver Erik Jones slammed into the back of him, knocking both drivers out of the race.

During a round of pit stops, Keselowski came off pit road first and reclaimed the race lead. On the restart with four laps left in the stage, Keselowski was followed by Truex, Kurt Busch, McMurray and Bowman.