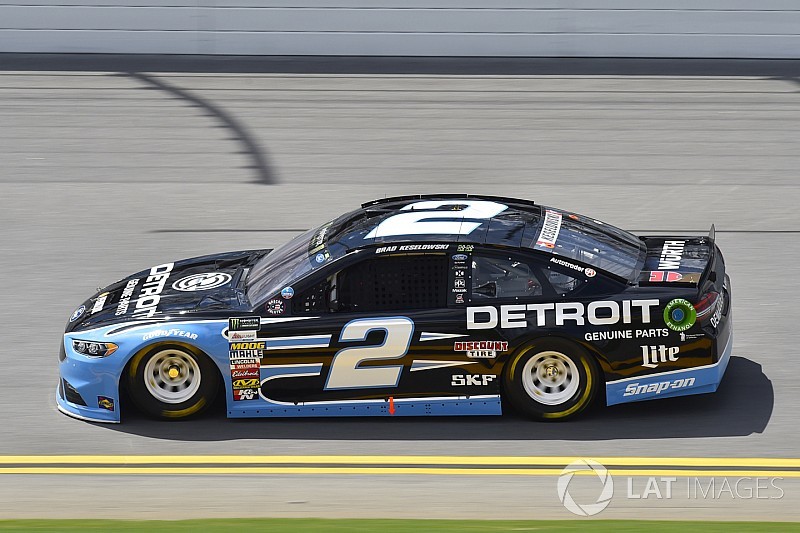 Brad Keselowski picked up his third stage win of 2017 after leading 32 laps in Saturday’s Coke Zero 400 at Daytona International Speedway.

"Well, we're just one Stage in. Not a bad start, but there's a long way to go," Keselowski told the NBC TV booth during the Stage break. "With four (new tires) I feel I can make more aggressive moves. Everybody's done a good job."

Earnhardt led the field to green but Chase Elliott quickly took the lead from the No. 88 on the outside — despite a push from Brad Keselowski on the No. 88 car’s bumper. After two laps, a third lane formed up high on the backstretch with Elliott out front, Earnhardt second, Keselowski third.

Earnhardt was shuffled back to fourth as the Fords of Keselowski and Kevin Harvick moved to the outside into Turn 1. Keselowski took the lead coming to the line after completing Lap 5. Harvick, Elliott, Earnhardt and Ryan Blaney rounded out the top-five as the front 31 cars ran three-wide. Seven laps in, Blaney moved up to third by working the bottom.

Blaney lined up behind Keselowski to keep the No. 2 Ford out front on Lap 9 but as the leaders came out of Turn 2, NASCAR called a caution after Cole Whitt’s engine gave out. Keselowski held the point followed by Blaney, Elliott, Harvick, Clint Bowyer, Joey Logano, Earnhardt, Matt Kenseth, Kasey Kahne and Jamie McMurray.

The race returned to green on Lap 12. The three cars on the inside were locked together — Keselowski, Elliott and Harvick. Hamlin returned to pit road with just one lugnut on his right rear tire. He restarted 38th.

DJ Kennington ignited the second caution on Lap 15 after his engine blew and he spun in his own oil off of Turn 4. Keselowski was in the lead followed by Blaney, Harvick, Elliott, Bowyer, McMurray, Logano, Johnson, Trevor Bayne and Stenhouse. Earnhardt, Kyle Busch, Kenseth, Erik Jones and Martin Truex Jr., rounded out the top 15 prior to NASCAR electing to convert the yellow into the competition caution.

The race returned to green on Lap 19 with Keselowski at the point followed by Blaney, Elliott, Harvick, Bowyer, McMurray, Johnson, Bayne, Stenhouse and Earnhardt. Erik Jones, the first car off of pit road restarted 19th.

Two laps later, Bowyer moved up to third followed by Blaney, Stenhouse, Harvick and Bayne — for six Ford at the front. Blaney regained third on the next lap with McMurray moving up to sixth.

Coming to the line after 25 laps, Keselowski remained in the lead with Bowyer moving to second, Elliott, Stenhouse and Blaney rounded out the top five. Ty Dillon went to the inside looking to make it three-wide and immediately lost real estate dropping to 21st. Harvick moved up to second on Lap 27 as McMurray, with a push from Earnhardt claimed third. Elliott pushed Harvick to the lead on Lap 29.

With 10 laps remaining in the stage, Harvick was leading followed by Keselowski, Elliott, McMurray, Earnhardt, Bowyer, McDowell, Blaney, Kenseth and Logano. McMurray pushed Keselowski to the lead coming to Lap 32. Earnhardt ran the high line to fourth as the leaders were three-wide at the line.

Harvick regained the lead on Lap 34 with a push from Stewart-Haas Racing teammate Bowyer. Earnhardt shoved Keselowski out front on the next lap then looked to the high side in Turn 1 to pass. Keselowski put on the block to retain the lead. Blaney hooked up to the back of the No 88 to push Earnhardt to the lead on Lap 36 — with the crowd cheering him on.

Jones and Hamlin pit on Lap 37 as Keselowski came back to the point with three to go in the stage as the front 18 cars broke away from the field. Keselowski continued to lead followed by Earnhardt, Blaney, Bowyer and McMurray.

Coming to the line, it was Keselowski by 0.131-seconds over Earnhardt.

There were eight lead changes among four drivers.

Drivers to watch in NASCAR's second Daytona Cup race of 2017