Keselowski will bring up the rear on Sunday 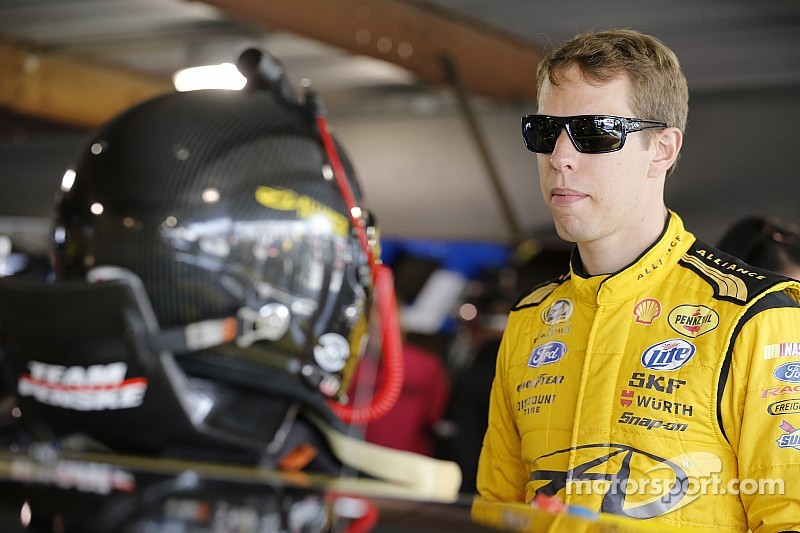 FORT WORTH, TEXAS – A starting position of 26th for Sunday’s AAA Texas 500 wasn’t what Brad Keselowski was hoping for to redeem himself this weekend.

On Friday, Keselowski failed to transfer to the second round in qualifying for just the fourth time this season after posting a speed of 197.181 mph after three attempts.

“Had a pretty good lap there, Paul,” Keselowski said.

“We’ll see what we can do tomorrow, thank you,” crew chief Paul Wolfe replied.

Matt Kenseth won the pole with a lap of 199.299. He was the first driver in the final round to take the track. Jeff Gordon, Jimmie Johnson, Kurt Busch and Kevin Harvick rounded out the top five. Chasers Ryan Newman, Joey Logano and Carl Edwards qualified seventh, 10th and 11th, respectively.

Johnson led the first round of qualifying with a lap of 199.734 mph. The top 17 cars in the initial round broke the track record of 198.282 mph established by Kevin Harvick in April.

"If Matt Kenseth qualified on the pole, we're in for a long night," Johnson said.

Tony Stewart (sixth) broke the 200 mile per hour mark in the second round with a lap of 200.111 mph (26.985-seconds, the fastest lap ever on a 1.5-mile track. Kurt Busch set the previous record (198.771mph) three weeks ago at Charlotte Motor Speedway. Chaser Denny Hamlin, who will start 20th, was bumped out of the second round.

Bringing up the rear

Keselowski was in a similar position following the Contender Round when only a win at Talladega Superspeedway would tranfer him into the Eliminator Round.

You always feel like you can get your way out of a jam and in this case it is with a win.

"You always feel like you can get your way out of a jam and in this case it is with a win," Keselowski said. "We were able to do that in the last round. I am optimistic we can do that in this round and the reality is it will probably take that.

Putting it to the test

Keselowski appeared disappointed with his lack of speed in qualifying considering that Team Penske tested at Texas last month.

"Didn't quite have the qualifying round we were looking for but that’s just part of the game," Keselowski said.

Still, he remains optimistic entering Sunday's race. He has the winning notes from Penske teammate Logano, who was victorious here in the spring and Keselowski led a career-high 85 laps before finishing 15th.  In his last four starts, Keselowski posted a career-best second along with, three top 10 finishes and led 190 laps.

"The good thing about Texas and racing here is that it is a very long race," Keselowski said. "If you have a great car, a great team then you will find a way to the front. For me, I like qualifying well. You want to win every day you are at the track. When we get done with the Texas weekend the reflection will be upon the race and how it ends up. That is the most important thing. That is where I am trying to keep our focus as well.

"I am not saying that I don’t want to qualifying well because we do. We want to win every day but we can’t rewind qualifying just like we can’t rewind last week and even if we could I am not sure what we would do better or different but we can focus on what is in front of us and that is the race.”