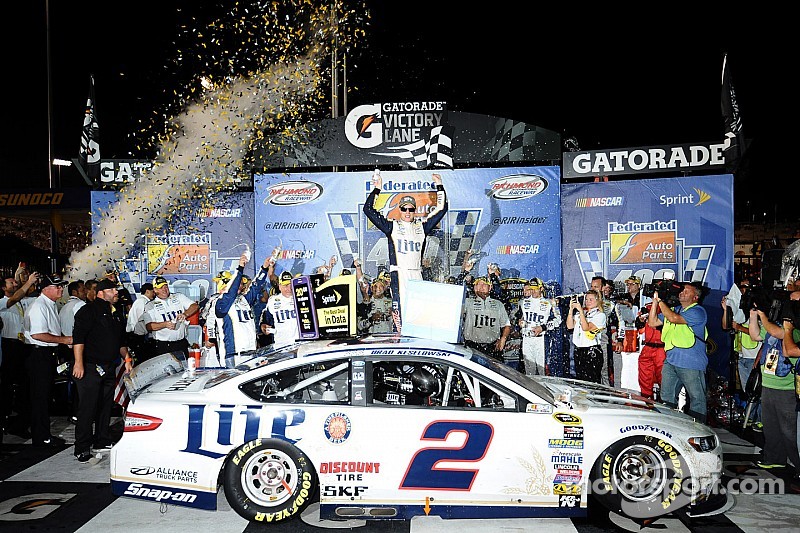 The 16-man Chase field is set

Brad Keselowski topped the field in the Federated Auto Parts 400 at the Richmond International Raceway on a steamy Saturday night in Virginia’s capital city.  Driving the Miller Lite Ford, the former champion soundly thrashed the field, leading 383 of the 400 laps.

The race marked the end of the NASCAR Sprint Cup Series regular season and set the field for the upcoming 10-race playoffs.  Sixteen drivers will be in the Chase and Ryan Newman and Greg Biffle sewed up the final two slots.

These are nights you don’t forget as a driver and you live for.  The Miller Lite Ford Fusion was just flying

Newman only needed to finish 41st or better; he finished ninth.  Biffle had a difficult race, finishing a distant 19th while needing a 22nd or better.

In winning for the fourth time in 2014, Keselowski becomes the top seed in the forthcoming Chase for the Sprint Cup.

“What a night. Part of me, when I pulled into Victory Lane I pinched myself once to make sure I wasn’t dreaming,” Keselowski said.  “These are nights you don’t forget as a driver and you live for.  The Miller Lite Ford Fusion was just flying.  I couldn’t ask for a better way to enter the Chase than to come in with a win and take the first seed and we’re ready.  We want to run for another Cup.  We really feel like this team has it."

"Team Penske is really clicking.  The 400th win for Team Penske, and I just feel so lucky to have such an incredible team and a car like we did tonight, and to be able to execute and not have any bad luck.  We’ve had plenty of bad luck over the last few weeks, but, wow, what a night."

“This is more than just a fast car; this is a team that executed all night.  We had great pit stops and came out with the lead every time.  That’s a testament to the pit crew.  The race car was fast and made all the right moves, got through traffic and executed the restarts – everything went the way we needed it to go tonight and that’s what you’ve got to do.”

Crew chief Paul Wolfe said while they have shown a lot of speed, the team’s performance tailed off during the summer but he promised Keselowski they had gotten their act together of late.

Team owner Roger Penske said of the 400 win milestone, “The 400 wins took a long time.  I remember when we got to 200 we got stuck there.  As we have learned more about getting the top talent, it is the continuity of having the same people.  That’s why Hendrick is so strong – year after year after year they know how to execute.  We’ve brought on people and that’s what it takes.    Brad wasn’t sure what he was getting into when he came on board, but you can see what he has been able to produce.”

Gordon fails to run down Keselowski in the end

The race marked the end of the NASCAR Sprint Cup Series regular season and set the field for the upcoming 10-race playoffs.  Sixteen drivers will be in the Chase and Ryan Newman and Greg Biffle sewed up the final two slots.

Finishing .797 seconds behind Keselowski was Jeff Gordon in the Drive to End Hunger Chevrolet. At the end, Gordon narrowed the leader’s margin but couldn’t quite catch the speedy Keselowski.

"Really solid effort all weekend long,” Gordon said.  “When it counted most, the team stepped up. I am really, really proud of and excited for these next 10 weeks. We just didn't have what Brad (Keselowski) had on the short runs. He was able to take off and get away from us, but we were better than he was on the long runs. We gave it a heck of an effort.

Now, if we can make ourselves a little bit better at some of these places, watch out

"It's been a great season so far, we are excited to get that Chase started next week in Chicago.  You want to win every race. If you are not able to win every race, you go to work to figure out what you need to do to be better. There are certain tracks that we go to that you know you are really, really good. And there are some that we go to that we have to work on a little bit. All in all we are just a solid, consistent team that also knows how to win. You can't ask for better than that. Now, if we can make ourselves a little bit better at some of these places, watch out.”

Johnson had to be helped from his car and needed medical attention in an apparent bout with the heat and humidity.  Subsequently, it was confirmed by NASCAR that he was being treated for dehydration.

Four caution flags slowed the race for 27 laps.  In one bizarre incident, a fan climbed the fence beside the track, triggering a yellow while he was being removed and a potentially tragic situation was avoided.