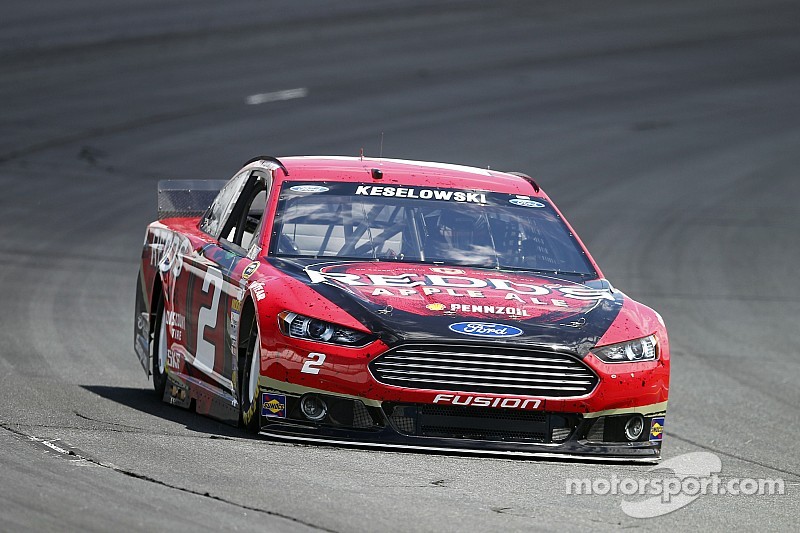 Brad Keselowski kept his trend atop the speed chart rolling from morning practice to Happy Hour on Saturday.

Keselowski's Team Penske teammate, Joey Logano, was not only acclimating to backup car after blowing a tire and slamming the outside wall in Turn 4 on Friday, the driver of the No. 22 Ford was adjusting to the sprained wrist he suffered during the accident.

“We had a left rear tire go down there,” Logano said. “The same exact thing happened in this race last year. I wasn’t even close to saving that. I needed about 500 more yards of straightaway to save that one.

“It is a bummer. I felt like our car was pretty good. It wasn’t great but we were getting closer and I felt like we were a top-five car.”

The Hendrick Motorsports cars of Jeff Gordon, Dale Earnhardt Jr., Kasey Kahne and Jimmie Johnson, were second, fourth, ninth and 11th, respectively. The teammates tested June 3-4 and felt the exercise was productive. Upon returning this weekend, Gordon, who has three wins at the Magic Mile and an average finish of 10.6, felt the No. 24 Chevy was producing consistent laps.

“I think we knew coming into this weekend that race trim is where we were at our best,” Gordon said. “It was really consistent in the test here and it seems to be backing that up. Of course, you get this many cars out on the track, laying rubber in these kind of conditions and you have to start adjusting.

“We have a few more things that we can work on to make it a little bit better over the longer run, but all in all, I’m really happy.”

“It seems to be air pressure related,” Gordon said. “So I think it seems to be in our control. I don’t know where the 43 was at. I’m not exactly sure where the 22 was at yesterday but it’s something we’re going to monitor with Goodyear. We’ve seen this in the past not just here but other places where the left rear tires becomes an area that we can really attack to try to help some of the conditions we’re fighting and not be really a penalty until you get too low and you have a failure like that.

“So it’s something that we want to get right to that edge but we don’t want to go too far over. No different than right front camber. Now, we’re starting to get into that with air pressure on these left sides.”

News flash! Morgan Shepherd is old. Get over it.