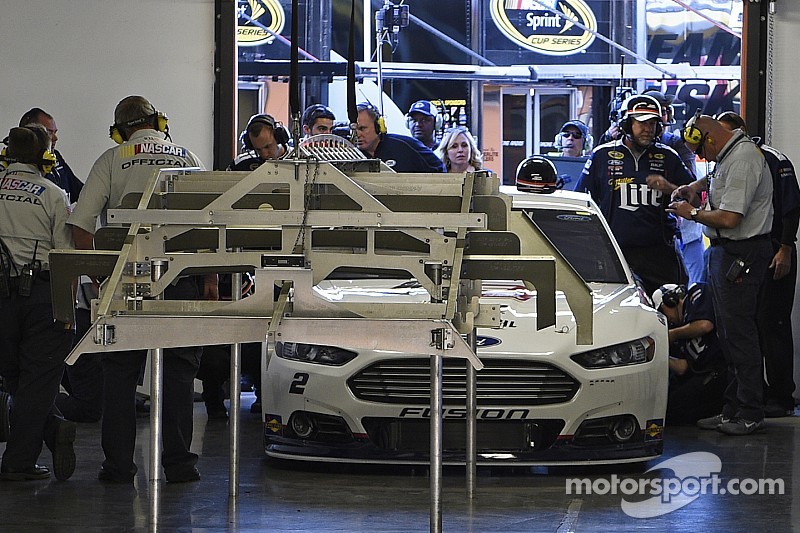 It is unknown whether or not NASCAR will penalize the No. 2 team further.

LAS VEGAS – Brad Keselowski was pulled from pit road just minutes before qualifying at Las Vegas Motor Speedway after NASCAR officials discovered the Team Penske crew had pulled out the fenders around the wheel wells on the No. 2 Miller Ford.

Keselowski makes it onto the track

Keselowski’s crew was forced to return to NASCAR’s template inspection room prior to returning to the track for the first round of qualifying, missing the first six minutes of the session.

They just wanted to see it pushed in a little bit ... I'm not sure (if it was changed).

"We got to the final round I just couldn’t make anything of it," said Keselowski. "It was a decent effort today. It is better than starting last.”

In regards to being called back to tech, “I honestly don’t know enough to speak intelligently about it so I will let the smart guys do that part.”

"They just wanted to see it pushed in a little bit," said crew chief Paul Wolfe. "I'm not sure (if it was changed). The officials were out on the grid after the guys got through inspection to make sure guys don't have their skirts out too far. They didn't like how wide ours was and we had to come back (through inspection) and push it in and then get on our way."

NASCAR’s Kerry Tharp said teams were warned prior to Speedweeks at Daytona International Speedway not to pull out the side skirts following inspection and prior qualifying. Tharp would not speculate as to what/or if penalties would be forthcoming.