Kenseth knocked out of contention while oblivious to NASCAR penalty 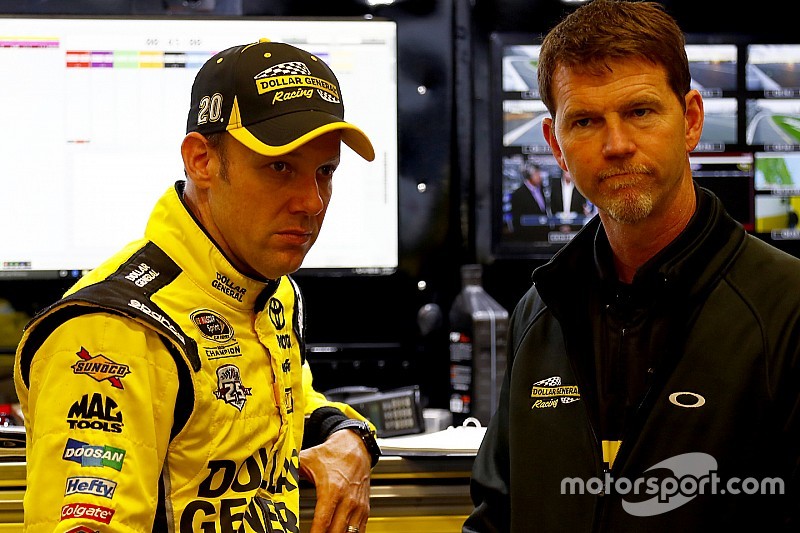 Matt Kenseth appeared to have a car capable of contending for the win Sunday but was oblivious to a controversy over a NASCAR penalty on a pit stop and ended up getting black-flagged.

During a mid-race green-flag pit stop, the fueler for Kenseth’s No. 20 Toyota placed a tool on the rear of Kenseth’s machine while he still had the fuel can engaged with the car.

The NASCAR rulebook forbids fuelers from engaging in any other activity while they have a fuel can engaged to the car.

After Kenseth completed his stop and returned to the track, NASCAR called an improper fueling penalty on the team, black-flagged Kenseth, and ordered him to serve a pass-thru penalty.

Kenseth’s crew chief, Jason Ratcliff, immediately began arguing the call with a NASCAR official in the pit box, but while that was going on, no one communicated the penalty to Kenseth over the radio and he continued to remain on the track.

NASCAR did not relent on the call and by the time his team finally communicated to him to head to pit road, Kenseth had been penalized one lap for failing to serve the penalty within three laps. He lost another lap while making the pass-thru penalty.

This led to much discussion over the No. 20 radio between Kenseth, Ratcliff and spotter Curtis Markham.

“I got black-flagged for some type of pit road penalty and I didn’t know it and pitted the lap they told me to do a pass through – I’m assuming they were black flagging us before that and they pulled our card,” Kenseth said after the race.

“I never heard anything about it or at least saw the flag or anything, so I came when they told me to come and I guess they must have penalized us a couple laps or something. I don’t really know. I haven’t really seen it.”

Kenseth seemed upset at the time of the incident as to why no one on his team let him know he needed to serve the penalty, whether the team was arguing the call or not.

“I got to have that information,” Kenseth said at the time over his radio. “I can't help you if I don't.”

Kenseth, who led 47 laps in the race, ended up finishing 19th.

Kenseth’s team owner, Joe Gibbs, also argued with the NASCAR official in the pit at the time of the incident.

After the race, Gibbs said he was seeking clarification as to the nature of the violation.

Gibbs said it was understandable Kenseth didn’t know what was taking place because the race remained under green-flag conditions and he continued to battle up front.

“We should have done a better job of communicating to him that there was a black flag,” he said.

Ratcliff was not available for comment after the race.

Dale Jr. believes Dale Sr. "would have thought the world of" Jimmie Johnson