WITH MORE ON THE LINE, TECHNICALLY FOR WINS, WOULD YOU BE WILLING TO WRECK THE NO. 3 CAR FOR A WIN? EVEN THOUGH IT’S AUSTIN DILLON IN THE NO. 3, WHAT WOULD IT BE LIKE, DRAMA-WISE, FOR THE FIRST CAR TO WRECK HIM?

“Oh, there would probably be some drama, maybe, I don’t know. I don’t usually wreck guys. I don’t know how to wreck someone. That’s my problem.” 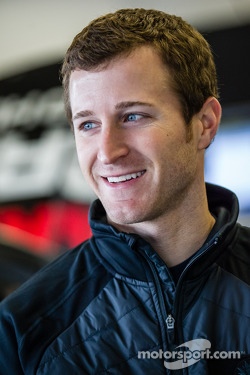 DO YOU THINK YOU’LL BE ANY MORE PHYSICAL OUT THERE?

“I think what it’s going to be is you’re not going to have to worry as much about if I make a mistake, if something happens with me and this other guy, it really hurts our chances of making the Chase or being good in points.

“There are so many other ways to make the Chase and get in there. So, I think it helps some of that. You’re not always just so worried about points and things. So, yeah, they’ll be times when you’ll think about that and know and be able to do something that you may not have done last year, more aggressively.”

WHAT DOES RAY EVERNHAM BRING TO AREAS THAT YOU HAVEN’T HAD BEFORE?

“When I raced for Ray, he always worked really well with his employees and with his guys about improving. He was always working on improving any way that you can. How can you improve? How can engineering, how can the driver, how can the pit crews, the guys building the car and the bodies; there are so many aspects and things to look at. And if he’s always on you about improving, we got better that way.

“So, I think he’ll come in and kind of look over some of the ways that we do things and how the No. 5 and the No. 24 work together and things like that, and just try to help us with a little bit here, and a little bit there. Overall, I think it will be a good thing. It’s tough to say how much it will improve us, but overall it’s definitely going to be a benefit because Ray is good with people and he’s done that type of thing to kind of motivate.”

DO YOU HAVE A CLEAR IDEA OF WHAT ROLE HE WILL HAVE?

“I don’t really have a clear idea. I have an idea that he’s going to try to help us all improve and try to help us get a little bit better in different areas and in just things that he sees. He’ll work with the crew chiefs closely and some of the engineers. I just think it will be pretty neat to have him.”

AS A KID, WHAT WERE THE FIRST WHEELS YOU HAD?

“Well, it was probably a wagon, like a little bigfoot that you’d sit on and try to push yourself along with your feet. I remember that. That was probably one of my first. And then, probably a bicycle would have been early-on also.”

DO YOU KNOW WHERE YOU GOT YOUR WORK ETHIC?

“I got that from my dad. He taught me at a young age that you have to work hard for things and if you want something, you have to work hard to get it and stay after it. I just kind of always had the same outlook on working and getting up in the morning and doing things like that. So he applied it when I was pretty young and I’ve always kept it because he was up and gone at five in the morning, every morning. So if he ever came home and I was still in bed that was bad. There were just different scenarios and things that went on, so I just learned from a pretty young age that you’ve got to get up and get things done and go for what you want.”

HOW DO YOU THINK THIS NEW CHASE FORMAT PLAYS INTO YOUR HANDS?

“So maybe that changes it up. Everything is different at that point. It’s hard to look at the Chase and say this is how it would have ended up with this system because it would have been way different and everybody would have driven different. Things would have happened at different times, so it’s hard to say that. But I think it could definitely help me. Over the years there have been some times when I’ve been a little inconsistent or had bad luck for a period of time and things like that. So this way, this system helps me a little bit get into the Chase. Once you’re in the Chase, you need to perform. That’s just all there is too it.”

WHAT DO YOU EXPECT OUT OF TONY STEWART THIS YEAR?

“I expect Tony to probably run a lot of laps tomorrow. Tomorrow is Friday, right? Yeah, so I’d say he’ll just run a lot of laps. Probably by himself and probably just feeling out his leg and his car and how well he can feel the throttle when he’s pulling back and forth and things like that. Daytona is not a track that he’s probably real worried about because you can run wide open.

“You can soften-up the throttle springs and it will be fairly easy for him to do that. But I think he can learn a lot about the next couple of tracks after this and how his leg will respond to that. So, he’ll just probably mess with that tomorrow. Other than that, I think he’ll be pretty darn good this whole season.”

DO YOU THINK HE’LL BE IN THE CHASE?

WITH THE NEW SYSTEM, I THINK DALE EARNHARDT JR WOULD HAVE ENDED-UP WINNING LAST YEAR. WHAT DO YOU EXPECT FROM HIM THIS YEAR?

“I expect him to be really consistent again this year. He’s been doing that for a while now. He’s right there every race, kind of like the top six it seems like. He’s always up in the top six. And I feel like he’ll be that same consistent guy. He puts a lot into it over the last couple of years, being his teammate; he puts a lot into it and understands what’s going on. None of that is going to change.”

DO YOU SEE A POINT WHERE HE TURNED THE CORNER A LITTLE?

“Ever since I’ve been at Hendrick, he’s been on top of it. I feel like he’s really been there. Prior to that, I knew Dale, but I didn’t spend a lot of time with him on why are you struggling or this or that; you used to be so fast. And since I’ve been at Hendrick and spent more time with him, he’s been super-focused and really aware of what’s going on and it’s showing on the race track. So, that’s the call that I’ve seen.”

ARE YOU WORRIED ABOUT THE IMPACT OF LOSING KEITH RODDEN?

“It changes things a little bit for myself and our team. Not having him will be much difference once we get racing, but at the same time I felt like he was ready and prepared to take on the role that he has now. So, It’s really good for him to get to move on and be a crew chief and see how that goes for him. He’s very smart and he’ll work well with Jamie (McMurray), so I think that’ll be great for him.

“For us, I think it’s really good to get our guys, the engineers that we have, in working with (crew chief) Kenny (Francis) because that’s going to be overall a better situation now because everybody kind of knows their roles and really run with it. So, I’ve had a great time testing with the guys throughout the winter and I’m really looking forward to what we have now.”

IF YOU HAD TO PICK FOUR DIFFERENT TYPES OF RACES OR VENUES, WHAT WOULD MAKE A GOOD MIXTURE OF RACES?

“Oh, probably something to do on dirt; I don’t know. I’d say maybe a World of Outlaw driver, a NASCAR driver, IndyCar driver and Supercross guy or something like that; just switch it all up. To me that would be a pretty neat group of guys.”

“Yeah, I mean if it’s a race of champions, I’d have to be a champion to participate. But I would definitely enjoy that. I enjoy racing as much as I can, any type of car, so that would be pretty fun if that opportunity was there.”

WHAT WAS YOUR SUPER BOWL EXPERIENCE? DID YOU WATCH IT AT HOME?

“Yeah, I just stayed at home and had some people over. I just couldn’t believe the first quarter and how confused the Broncos were compared to the Seahawks. You could tell right then it was going to be a blow-out at that point. So, I didn’t get too excited until like the third quarter when Percy returned it and then I was like, man, this is looking really good now because football can change so quick, especially when Peyton Manning is your quarterback. But it was exciting. We had a blast. My family is all Seahawks; and then most of my friends that were over were Denver Broncos. So I didn’t want to have to listen to them the whole game, so the way it worked out from basically the first ten seconds, they were quiet the rest of the game and we got to be loud and enjoy it.”

I DON’T KNOW WHAT IT’S LIKE TO WIN A RACE, BUT WERE YOU AS FIRED-UP?

“I think it’s a lot different, but I can say that I’m actually still really excited about the Seahawks. And looking into next year already, that’s kind of similar what you do in a race. You win a race and instantly you’re looking at the next one and how we can do well there. Just this week I’ve talked two or three times to people about what they’re doing for next year and how they’re going to be just as good. It’s pretty exciting. They have something there that can go for a long period of time and keep winning.”

WHAT SPORT DO YOU THINK YOU COULD WIN A GOLD MEDAL IN AND WHY?

“I think the short track skating looks pretty awesome. It would be pretty neat to do that. And maybe even the bobsledding or something like that. It’s pretty cool.”

IS THERE ONE RACE IN YOUR CAREER THAT STANDS OUT AS ONE THAT GOT AWAY FROM YOU?

“Yeah, I think Darlington last year is the most recent race that got away. And there are a lot of races that get away throughout a season. We were really good in that race. We ran about third throughout a lot of the race; second, third, fourth; and then we got it right and drove past a couple of guys and drove past Kyle for the lead and then the next corner was when he kind of pushed up and we touched and I spun into the wall. And then Matt Kenseth ends up winning after all that. But we were by far the best car at the end of that race but just didn’t get the win because of circumstances.”