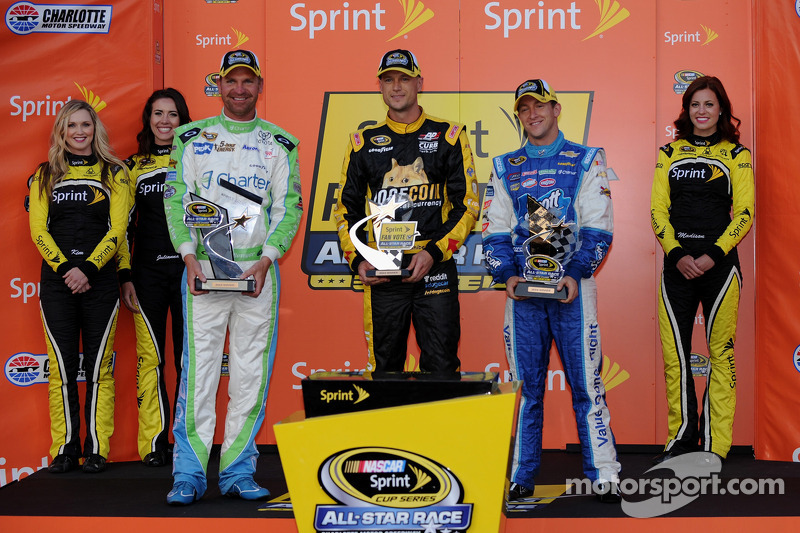 CONCORD, N.C. – Clint Bowyer won the Sprint Showdown at Charlotte Motor Speedway on Friday night but it was Josh Wise who stole the show.

With support from the Reddit community, Wise, 31, earned the Sprint Fan Vote to transfer into Saturday night’s Sprint All-Star Race for the first time in his NASCAR career.

“I'm still trying to wrap my head around it, I guess,” Wise said. “This is huge for me and our team. Really it started with a 16-year-old kid posting something on Reddit.com about some good runs that we had had, and for whatever reason this huge, awesome community just got behind us, and everyone knows about them raising money to sponsor us at Talladega, and then it was on to the Fan Vote. “I'm just super thankful to be a part of it, really. It's been a pretty cool experience.”

Wise arrived on the NASCAR scene in 2007 with Tony Stewart’s blessing. After the Riverside, Cal.-native won USAC Sprint Car title for Stewart in 2006, he tried his hand at trucks and in the Nationwide Series.

But it’s been anything but easy. He’s raced for more than a dozen owners. He’s endured his share of decent rides as well as start-and-parks.

And despite the challenges, Wise persevered.

“If you asked me two months ago, there's just no way that I would have thought this was possible,” Wise said. “You know, you kind of outlined a little bit of my path, and it was pretty awesome and exciting through my open wheel days, driving for Tony and A.J. Foyt and seeing success, and it's been really, really hard since I've been out here.

“And one of the challenges that I've faced is just gaining momentum through sponsorship and being in really good opportunities to be able to showcase what I think I can do, and so this is a big deal because obviously we have a lot of people behind us. Hopefully, it helps us to build a better program here as we go forward.”

While pundits predicted that fan favorite Danica Patrick would easily earn the fan vote, it was obvious they underestimated the pull of Wise’s Reddit fan base. Wise knew with the “110-million people that regularly use Reddit” the “potential” was there. When asked whether he thought his fans ‘gamed the system’, Wise bristled a bit.

“I don't necessarily care what people say about it,” Wise said. “Yeah, I mean, people vote and the person with the most votes wins, so however you play the game, I guess. That's all I have to say about that.”

For winning the Showdown and transferring into the All-Star Race, it’s likely that Wise will bring home more than $100,000 for owner Phil Parsons – which will certainly fuel the single-car team’s cause. But with the pull of the Reddit community, it’s a win-win for the sport and the potential of new fans for NASCAR.

“It just helps us,” Wise said. “We're able to buy those extra sticker tires on the weekend so that we feel like we have a car that's going to be more competitive. I am stoked for just Phil Parsons Racing in general about this. Phil really took a leap of faith and just saying we're racing this year, we're going to do whatever it takes to race, and that's what we've been doing.

“This is kind of a big deal for our sport, I felt like, because it's a lot of like young kids and people from around the world. I've had the chance to interact with a lot of them, and there's a lot of people who had never watched a NASCAR race who have now watched several, so it's a pretty cool deal.”

What's next for Richard Petty Motorsports?