Johnson will win another title today

Jimmie Johnson is as good at Sebastian Vettel, but why do people hate these guys?

We are living in a time of greatness, technical advances and pure brilliance.

This is evident by the technical advantage Red Bull Racing has had in Formula One for the past four years. How about the John Force dynasty in the NHRA?

What makes this any different than Jimmie Johnson, Chad Knaus and Hendrick Motorsports? 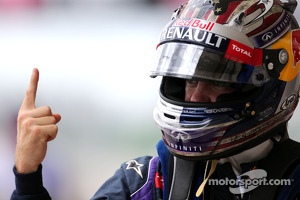 Johnson needs to finish 23rd or better today to lock up the title. I won’t bore anyone talking about statistics, cause I am sure they are staggering. But I will simply take a wreck, or an engine failure for the Californian to NOT win his 6th title.

Now. There is a constant negative whisper when talking about dominant drivers. I think that is a natural reaction to dominant players in any game. Wayne Gretzky, an ice hockey great, was called a whiner and a wimp…which was seemingly a negative reaction to his success.

Sebastian Vettel is booed on the podium, and people talk about how he is simply in the best car. Yep, there is a car AND a driver involved folks.

Now, we come back again to the stock car world. Johnson gets the same feedback. Is he cheating, seems to be the most common question. I don’t doubt that he is cheating…but it’s not considered cheating until there is a rule against something.

Back to Formula One…the BBC released a technical commentary that talked about the ride height of the Red Bull car…a trick that allows the car to be tall enough when it is measured in the paddock, but lowers the floor when at speed. This provides more downforce. It is simply genius. And every other team wishes they had come up with it. I bet a couple of the high-spending teams will have their variation on it for the finale weekend. 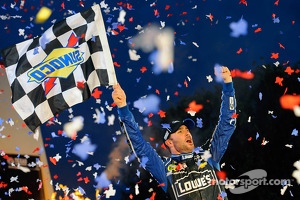 So…this leaves Johnson and his 6th title he will lock up today. What is it? I couldn’t tell you, the secretive nature of NASCAR is just as high as that of the Formula One ranks… It seems every single one of the #48 chassis’ that is in that teams stable has one or more wins…so they are doing something different.

But what we all need to keep in mind with this season finale at Homestead is that there are seven guys who have to be perfect in the pits, and a driver who has to keep a position above 23rd. After all they did the work to be able to be given the advantage.

I am rooting against Johnson today… like much of the rest of the racing world, but that does not change my opinion of the pure racing greatness he, and a handful of other drivers today show each and every race weekend.

Hamlin romps in finale at Homestead-Miami