Jimmie Johnson held off a charge from Brad Keselowski to win at Dover - Joe Jennings has the full race report.

Dover, Del. – Jimmie Johnson continued his mastery of the “Monster Mile” at the Dover International Speedway, winning for the ninth time in 25 attempts. Starting fourth in the Lowe’s/Kobalt Tools Chevrolet, the six-time NASCAR Sprint Cup Series champion charged to the front 82 laps into the FedEx 400 benefitting Autism Speaks and wasn’t to be denied as he circled his way to victory lane.

His margin of victory was .885 seconds due to a restart that closed the gap with four laps to go. Prior to the late yellow, Johnson had a comfortable lead of some three seconds.

For Johnson, he went to victory lane for the 68th time in his accomplished career and for the 13th time, he scored back-to-back victories, having won a week ago at the Charlotte Motor Speedway.

The victor’s supremacy at Dover is seen in the numbers, as he led seven times for 272 laps. En route to the checkered flag Johnson also became the all-time lap leader at Dover with 2,976 laps led. He surpassed Bobby Allison, who had been the leader with 2,802 laps in 35 races.

Said Johnson about his successful run, “Dover just suits my style. We just like to get it done and in particular, our car seems to be good on the long haul. I like loose race cars, and that seems to work well for me, too.

“The first segment of the race we were decent but just couldn’t go anywhere. On the second run, the track came to us and the car was incredible the rest of the day. At the end, we just honed in on the balance and the adjustments were awesome.”

Although seen from a distance, Johnson thought he saw something amiss with the track surface beforehand, but indicated it didn’t register with him until it came apart. 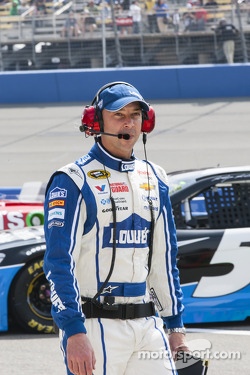 “We came in here with high expectations after winning the race last weekend,” crew chief Chad Knaus said, indicating the Hendrick team brought Johnson’s second favorite car to Dover. His favorite car won at Charlotte a week ago. “We were pretty optimistic after practice on Friday; qualifying went well, so we were excited about the race. Then, we were just out there to see how good we could do, and it turned out to be a good day for us.”

Said Keselowski, who made a late race run at the winner, “We had an up-and-down day after starting up front. We had to make adjustments to the car and dropped back to 13th or 14th. I thought we were going to get a crack at Jimmie (Johnson) until that last caution came out. I did drive back up there and got pretty close but couldn’t make it. The difference may have been due to our pit stall.”

Kenseth came from 21st to third and led four times for 16 laps. Said the driver of the Dollar General Toyota, “It was a solid day after I did a poor job qualifying. We did work our way to the front thanks to a good strategy and pit stops. The other guys were just better than we were and we couldn’t quite run with them. Overall, it was a good solid day. We just need to be a little bit faster.”

On the restart on lap 396, Kenseth lined up second but spun his tires on the restart and was bumped by Clint Bowyer. “I did spin as did Johnson, and when I tried to grab third gear, thinking it would stop spinning but it didn’t. I just need to do a better job. Clint’s bump nearly destroyed my car, and I am glad to have finished after that.”

Fourth and fifth were Clint Bowyer and Denny Hamlin, respectively.

Rookie Kyle Larson had to start last due to an engine change. Undaunted, he charged through the field to be as high as fifth at one point before ending up 11th.

Two red flags stopped the race for a total of 29 minutes. The first came about due to debris covering the backstretch after a five-car wreck and shortly thereafter when an expansion joint in the concrete track surface came loose, throwing debris against the car of Jamie McMurray.

Concurrently, the crossover bridge over turn two had to be repaired after it was damaged by debris.

Asked about the track tearing up, Keselowski said, “Whoever fixed it did a good job, although it started coming up at the end, but it was not a major issue. When it happened, it was a major issue and you knew it was going to get worse – small holes can quickly become big holes.”

Robin Pemberton, NASCAR’s director of competition and racing operations, met with the media afterward to address the track break-up. He said the track was inspected beforehand and no difficulties were noted, even though two drivers reportedly said they knew all was not well.

Kyle Busch started in the front row and led 81 laps. After losing the lead to Johnson, Busch got caught up with Bowyer, who got bad info from his spotter. In the incident, Busch slammed hard into the wall, dropping him from contention. He was scored 42nd.

In points, Kenseth moved into first place to lead Jeff Gordon by two points. Carl Edwards took over third, 25 back, with Johnson gaining fourth, moving up by two. Dale Earnhardt Jr. is in fifth ahead of Logano. Busch dropped four spots to seventh.

In his own words: Can Kyle Busch sweep Dover?