It may have taken Chad Knaus losing his hard card and being ejected from the race track for Jimmie Johnson to hit pay dirt at Daytona. A week after his crew chief was suspended and removed from the garage area by NASCAR for cheating, Team 48 pulled ...

It may have taken Chad Knaus losing his hard card and being ejected from the race track for Jimmie Johnson to hit pay dirt at Daytona. A week after his crew chief was suspended and removed from the garage area by NASCAR for cheating, Team 48 pulled off the big one. 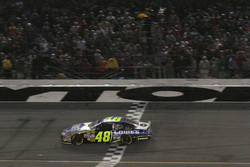 Jimmie Johnson takes the checkered flag.
Photo by Eric Gilbert.
"It's been a tough week for us," Johnson explained. "I wish Chad was here, I know he is kicking the TV set in right now, so bummed out. His hard work got this team to where it is."

One has to wonder if Knaus wasn't sitting on a couch somewhere in Charlotte text messaging calls to the team, but that's something we'll never know. What was evident was that the No. 48 team really came together to do something special. They promoted team engineer Darian Grubb to crew chief duties in Knaus' absence and didn't let the negative events leading up to the Daytona 500 falter their confidence.

"I believed this team could still win," said Johnson. "No doubt Chad not being here is a huge handicap but everyone stepped up. I am so proud of this Lowe's team."

Johnson had an aggressive car most of the race, but the break of the event came when he was leading on a green/white/checker restart with two laps to go. He was being hotly pursued by several cars and it looked at times that one or two of them might have the steam to give Johnson a battle, but a last-lap caution saved Johnson the dog fight sealing his win.

"I have been aggressive before, made some mistakes and caused wrecks," Johnson said. "A lot of different things happened tonight and I wanted to sit and ride and take care of things. After all the trouble this team has been through and all the criticism, I'm dedicating this win to the haters of the 48 team. We won and we're in victory lane for the Daytona 500."

It was Johnson's 19th career win and the first ever on a restrictor-plate racetrack. 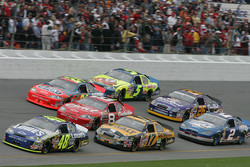 Jimmie Johnson leads Matt Kenseth, Dale Earnhardt Jr. and Jeff Gordon.
Photo by Eric Gilbert.
Casey Mears scored his best ever Daytona finish with second, "It was good, what a great day for the Texaco Havoline Dodge. We started out with a great run right out of the gate.we fought a really tight car throughout the middle of the race and we kind of got caught there in the back.but once we got beyond those guys you could make a lot of progress."

Ryan Newman was third, earning his first career top-five finish at Daytona, "They put a great Alltel Dodge underneath me. It was all about being in the right place at the right time.we had a great effort. It was a pretty typical Daytona 500 in my eyes with the racing and the whole bump drafting deal that has been blown out of proportion."

Elliott Sadler and Dale Earnhardt, Jr. were making a run to the front, but the final caution hampered their effort. Sadler settled for fourth while Earnhardt, who led the most laps, was shuffled back to eighth.

"Man, this is a great finish," commented Sadler. "It's a great way to get the season started off. You know what? We wanted to win, but to come back from all the adversity today and finish fourth; it's a great day for us. My guys never gave up, awesome pit stops all day, they're the ones that kept me pumped up, kept me in the ballgame and Tommy (Baldwin, crew chief) made some great calls. Good, good finish for us. This is great."

Tony Stewart came back from an early race incident with Jeff Gordon to complete the top five, "My team did a great job in the pits. They did a great job fixing my car. We just kept digging and found the right holes. We just got ourselves in position there at the end."

Jeff Burton led the field to the green flag under misty skies and was out front when the first caution fell at lap 17 when Martin Truex, Jr. blew a right front tire and brushed the wall. That brought the leaders in for service with Sadler beating the field off pit road.

Sadler led at the restart but Gordon overtook the No. 38 Ford on lap 23, the lead swapped between several drivers with Jamie McMurray leading when a bobble by Gordon after contact with Stewart saw both cars slapping the wall bringing out the second caution.

There was minimal damage on the No. 20 and No. 24 Chevy's as the entire field came to pit road. Gordon and Stewart's teams did their best to repair the damage with Newman beating the field off for the lead. Kenseth passed Newman on lap 58 and led until lap 78 when the third caution fell for the day's first multi-car crash. Jeff Green blew a tire and collected Carl Edwards, Joe Nemechek, JJ Yeley and Kyle Petty.

"It's extremely disappointing," said Edwards. "It's not how we wanted to start our season, but we'll just have to work harder."

On the restart at lap 85, Kenseth continued to lead being hotly pursued by Earnhardt, Jr. and Kevin Harvick. Earnhardt finally cleared both cars to take the lead on lap 86. The fourth caution came at lap 91 for debris on the backstretch.

During pit stops, Kenseth was forced to duck onto the grass to avoid contact with Kurt Busch while Earnhardt continued to lead. Earnhardt led until the field hung him out to dry on lap 104 when Mark Martin grabbed the lead. Former leader Kenseth went around on lap 107 bringing out the fifth caution after making contact with Stewart. The race off pit road was won by Earnhardt shuffling Martin back to third.

NASCAR sent a message to reigning champion Stewart for the contact with Kenseth citing aggressive driving. The 17 also had to go to the tail end of the longest line for pitting too soon and the No. 29 of Harvick was penalized one lap for running the stop sign on pit road.

After Kenseth had been warned to calm down he caught up with Stewart on the race track and gave him a love tap and the finger. NASCAR black-flagged the No. 17 and made him come in for a pass thru penalty.

Once the field settled down, the top spot continued to shuffle between several top drivers. Brian Vickers was out front when a debris caution waved with 46 laps to go. After service stops, Earnhardt came out in the lead with Vickers slipping to second. Under those stops, Michael Waltrip was penalized with a pass thru penalty for speeding on pit road.

The field restarted on lap 159. Earnhardt had the helm until lap 163 when the No. 12 of Newman wheeled past. With 25 to go, the No. 32 Chevy of Travis Kvapil hit the wall causing the events seventh caution. Vickers took fuel only on his stop gaining him the lead back while Sterling Marlin chose not to pit grabbing second. Previous leader Newman lined up third. 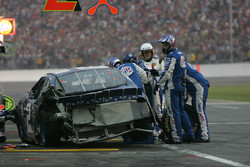 Kurt Busch in the pits after a late race wreck.
Photo by Eric Gilbert.
Johnson overtook the lead from Vickers when a caution at lap 188 involving the top ten cars of Kurt Busch, Marlin, Gordon, and McMurray tangled. He continued to lead on the restart at lap 191 as the cars jockeyed for position Kyle Busch punted Stewart garnering a black flag by NASCAR for aggressive driving for which he had to serve a pass thru penalty.

With four to go, McMurray and Burton made contact, spinning the No. 26 Ford into traffic and collecting Bobby Labonte and Denny Hamlin. The ninth caution set up a green/white/checker finish. That left two laps to settle it as the No. 48 Chevy tried to fight off the hard charging cars of Newman, Mears and Sadler. But a late-race crash by Greg Biffle on the last lap stopped the charge, and Johnson won his first Daytona 500.