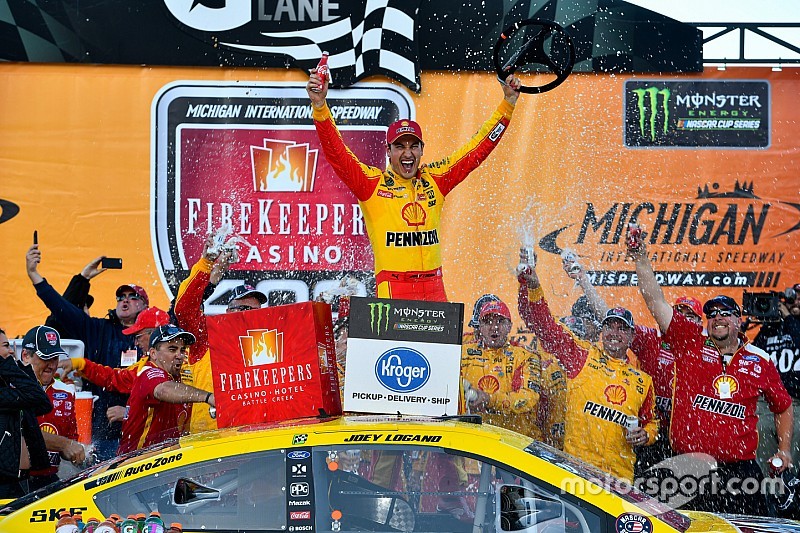 Logano led a race-high 163 laps en route to the victory.

"You race this whole race and you keep building that notebook up. We had a great execution day, our pit crew was amazing, our race car was fast. T.J. Majors my spotter, spotted his butt off up there," Logano said after the race.

"The race fans who stuck around until Monday - you guys are the best. Coming up here to Michigan, there's nothing like bringing a Ford to Victory Lane on their home turf and in one of Roger Penske's cars as well. There's no better feeling than that.

The final stage resumed on Lap 128/200 and Kevin Harvick took the lead with a bold three-wide move to the outside, helped with a push from Martin Truex Jr.

Behind them, Clint Bowyer got loose underneath Erik Jones and crashed into the outside wall, forcing a yellow flag.

With 66 laps to go, they went back green and the battle raged up front. Logano pushed Kyle Larson to the race lead, but took it for himself as Larson slipped up the track.

Harvick and Logano would go back-and-forth in the battle for the lead until Kurt Busch arrived near the front, taking second briefly. They, Harvick and Truex would break away from the pack before green-flag pit stops.

But with 28 laps remaining, the critical final stops began. Larson kicked it off with four-tire stop, followed by Harvick who did the same. However, most of the frontrunners opted for two tires, costing Larson and Harvick valuable track position.

In the closing laps, Logano appeared to have the win in hand despite a late charge by Kurt Busch and Truex, but a caution for a spin by Erik Jones forced an overtime restart.

On the restart, Logano got away with Truex sliding into second. Kurt Busch was able to fight his way around the JGR driver and it was between those three on the white flag lap, but no one could mount a real charge against Logano.

He took the win, his second of the 2019 season and third at MIS. Kurt Busch was second, Truex third, Daniel Suarez fourth and Kyle Busch fifth.