Joey Logano knocks Truex out of way to win at Martinsville 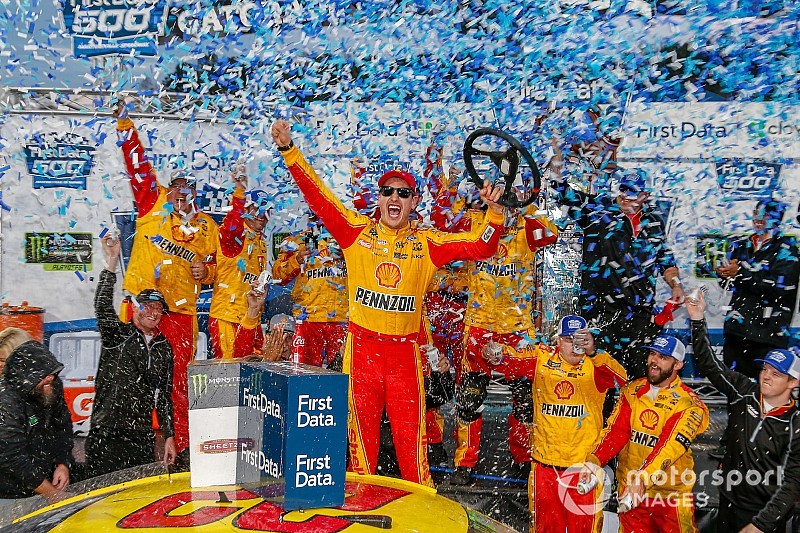 After a furious battle with Martin Truex Jr., Logano bumped Truex out of the way on the last lap and hung on to win Sunday’s First Data 500.

The win is Logano’s second of the season and automatically advances him to the Championship 4 at Homestead, Fla., next month and a chance to win his first Monster Energy NASCAR Cup Series title.

"It's racing, it's what we have to do to get there. We have to get there first," Logano said in Victory Lane. "We had a great car today. Our pit crew won us the race - they are so fast.

"Some are going to like it and haters are going to hate a little bit but I'm a hard racer. I don't think that's a secret to anyone. We're here to win a championship this year."

Asked how he would approach the rest of the season after what transpired Sunday, Logano said, "We're just looking ahead right now. We're focused on building a great car. Team Penske has been doing a great job giving me great cars in the playoffs.

"It feels so good to finally win at Martinsville. We've led so many laps, qualified good and to finally get a win. I don't feel like tracks owe you but man been there so close trying to get that Grandfather clock. Man, it feels good.

"What happens from here is going to happen, but we're going going focus on moving forward right now and building a great car for Miami."

Following the break between Stages 2 and 3, Logano was again the first off pit road and remained in the lead when the race went green on Lap 270. He was followed by Hamlin, Kyle Busch and Truex.

Ryan Newman, who was running in the Top 10, was penalized for speeding on pit road during his stop and had to restart from the rear of the field.

With 200 laps remaining in the race, Logano held a more than 1-second lead over Hamlin. They were followed by Kurt Busch, Truex and Keselowski.

On Lap 327, Truex moved into the second position behind Logano as Hamlin dropped to third. Kurt Busch ran fourth and Kyle Busch fifth.

With 145 laps remaining, Truex caught Logano and began stalking him for the lead.

On Lap 360, Truex finally got inside of Logano and made his way around him and into the lead for the first time in the race.

William Byron spun in the middle of Turns 3 and 4 on Lap 366 to bring out a caution. All of the lead-lap cars elected to pit for tires and fuel, with Truex the first driver off pit road.

On the restart on Lap 374, Truex led the way followed by Logano, Hamlin, Almirola and Kyle Busch.

On Lap 378, Logano got around Truex entering Turn 3 and reclaimed the lead of the race.

The caution came back out on Lap 382 when the No. 66 Toyota driven by Timmy Hill appeared to blow a tire and caught on fire as it entered pit road.

Several drivers took the opportunity to take on new tires including Elliott, Harvick, Bowyer and Almirola. Logano remained in the lead on the restart on Lap 394, followed by Truex and Hamlin.

Kyle Larson hit the backstretch wall on Lap 398 to bring out another caution. He was already four laps down at the time of the incident. After a long cleanup, the race finally returned to green with 86 laps remaining and Logano still out front.

Logano quickly moved out to a sizable lead as Keselowski moved into second.

On Lap 418, Keselowski went inside of Logano and moved around him and into the lead for the first time in the race.

With 65 laps remaining, Keselowski had moved out to a more than 2.5-second advantage over Logano with Kyle Busch close behind in third.

Clint Bowyer spun in Turns 3 and 4 after contact with Johnson on Lap 458 to bring out a caution and the bunch the field again. All of the lead-lap cars elected to pit for fuel and tires with Logano the first car off pit road.

On the restart with 37 laps left in the race, Logano led the way followed by Kyle Busch, Keselowski, Hamlin and Truex.

With 33 to go, Keselowski went inside and took the second position from Kyle Busch as Truex ran fourth and Hamlin fifth.

With nine to go, Truex powered around Keselowski and moved into the runner-up position.