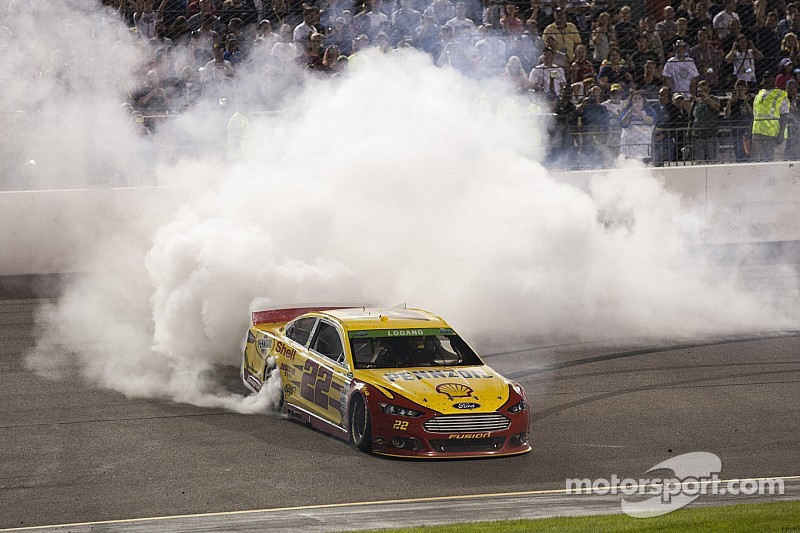 Teamwork will be the key to NASCAR title for Team Penske.

Before Joey Logano qualified second for Sunday’s GoBowling.com 400, he got his game on at Victory Lanes in Mooresville, N.C.

During the media event last month, Logano’s team knocked off Kasey Kahne’s squad. Although Kahne’s score of 169 topped the contestants, Logano claimed his tally of 125 was “good for me”.

Since Team Logano won the bowling match, Pocono Raceway kicked in a nice contribution to the Joey Logano Foundation.

“It’s cool that they threw in the charity part of it,” Logano told Motorsport.com. “A lot of times you’re just promoting a race, but any time you can add money to your charity, that’s good for drivers – especially when you can win.”

Winning is something that Logano has become accustomed to since moving to Team Penske. In his first two years in the No. 22 Shell/Pennzoil Ford, the 24-year-old Middleton, Conn.-native has earned three of his five career wins and is having one of his best seasons since he was promoted to the Sprint Cup Series by Joe Gibbs Racing in 2008.

Logano acknowledged that he’s never been happier than he currently is with Team Penske.

“When you enjoy going to work, that’s what it’s all about,” Logano said. “That’s when you perform your best.”

INTO THE DEEP END

Logano was still being home schooled when he was thrust into the Cup series as Tony Stewart’s replacement at JGR. While there was a lot of pressure for “Slice Bread” to perform, the driver says the expectations are just as high when you race for Roger Penske.

“I wouldn’t say there’s no pressure here – especially when you have Roger Penske on the radio you want to succeed for him,” Logano said. “It’s different. I wouldn’t say I had more pressure for me at Gibbs or anyone but more pressure on me there, maybe I just wasn’t ready for it.

Joey Logano on his experience at JGR

“It’s hard to lead a team at 18-years-old that has won a couple of championship and has been together forever and you don’t have the results to back it up. How do you fill that hole? It starts to snowball the wrong way on you and you’re just trying to stay afloat.”

Logano’s early expectations were clouded by his immediate success on the Nationwide tour. In his first three starts with JGR’s NNS program he won two poles and his first race. When Logano failed to equal those results in Cup, he refused to give up. He worked on what he could control and didn’t let the critics destroy him.

“When I started, I didn’t even know what I didn’t know,” said Logano, who has accumulated 21 NNS wins. “At 18, I thought I knew everything. I got in a Nationwide car – a good Nationwide car -- and I won races right off the bat. Like everyone else, I felt I had it all figured out – and BOOM! I didn’t.

“I needed a new life. I wanted to come to Penske as the man I wanted to be not the 15-year-old kid I was when I went to Gibbs.”

I needed a new life. I wanted to come to Penske as the man I wanted to be not the 15-year-old kid I was when I went to Gibbs.

Logano has persevered and evolved into one of the most consistent young racers on the Sprint Cup tour. He credits crew chief Todd Gordon and the core management group at Team Penske – President Tim Cindric, V.P. of Operations Mike Nelson and Competition Director Travis Geisler -- for elevating his game.

But Logano admits that no one at Penske pushes him as hard as his teammate Brad Keselowski.

“All those guys work well together,” Logano said. “They’re all racers – they’ve all been through it and working with Brad has been a good thing, too. It’s great to have a teammate that wants you there. He talks about it, too about how we push each other.

“When I first got there, he pushed me along a lot. To see some of the things that he did. I was like, ‘Huh? OK, I can pick up my game here. Here’s another area I didn’t know I was missing it. Let me pick it up here.’ Then he finds something and I find something and we keep pushing each other to top the next level.”

ATOP THE SPEED CHART

Nowhere has that been more apparent than this season with the new knock-out qualifying system. It’s been Team Penske on Fridays – then everyone else. Kesolowski, who starts third on Sunday, has an average qualifying effort of seventh – best on the Cup tour. Logano is second with ninth-place average start.

In the 20 races since NASCAR initiated the new format for time trials at Phoenix, Keselowski has advanced to the final round 15 times, Logano 17. The Richmond race started on points due to rain. Keselowski has started on the front row in 10 races, Logano six. Logano says the key is “fast cars”.

Currently, Logano has two wins this season and is currently ninth in the point standings – his position marred by a part and engine failure as well as an unfortunate run-in with Morgan Shepherd at New Hampshire Motor Speedway.

EYES ON THE CUP

While both drivers will have a shot in the Chase for the Sprint Cup, Logano feels that teamwork between the Nos. 2 and 22 will be the key to one of the drivers challenging for the title.

“We’ve done a good job,” Logano said. “Last year I felt like we had to catch up to the 2 car but now I feel we’re equal. We made the Chase last year. It’s big. But we have to keep it going. We have to keep working as close as we do – two teams. Not just the drivers, the whole teams. We have to make sure we do that. That’s a priority of ours because we are a small team.

“As a team we have to keep developing our equipment. That’s a given. And we have to have momentum into the Chase to try to win this thing. As a two-car team we need to be tight. We got to be out there. I think we have a shot at the championship. I think we can do it. We’re going to push each other along until one of us does it. If I can’t win the championship, I hope to God that Brad does it. And that’s the attitude we have. We don’t look at it and say, ‘Ugh, we didn’t have the best day and Brad won.’ We’re happy for each other.

"That’s good for the company. When Brad runs well, I run well. It kind of goes together. As long as we stay close and stay tight we can keep moving forward.”